On May 24, I heard a thud on our kitchen window—the smallest window on our house—and ran out to find a Red-eyed Vireo lying on his back on the ground. That window took out a couple of other birds within a few days. I think the neighborhood Merlin must have, for a time, been rocketing in using the same lethal approach, because I don’t think we’ve ever lost any bird at that little window before.

Male and female Red-eyed Vireos are fairly identical, but I was pretty sure this was a male, because one had been singing away just a few minutes before the collision, and now there was silence. I could have peeked under him, looking for the cloacal protuberance that would have confirmed that he was a male, or for a brood patch that would have confirmed the opposite, but I felt too guilty that I’d gotten him in this horrible situation to put him through that indignity.

When I picked the little bird up, he was lethargic and kept one eye mostly closed for quite a while. I put him in a shoebox to let him rest in the darkness, though it seemed hopeless. But a half hour later, he was looking a bit more alert, though one eye wasn’t open as wide as the other yet. When he seemed steady and I started holding him on my finger, he didn’t show any interest at first, but little by little started noticing the lay of the land and turning his head at some bird songs. He grew steadier and more alert, and his left eye started looking a lot better. Finally, he took off and alighted in a box elder in the middle of my yard.

During the hour and a half that the bird was in my care, I did not hear a single burst of song or any other vireo vocalizations from my yard. After he finally flew off, I didn’t hear any songs or calls for a couple of hours or so, but then, suddenly, lovely vireo phrases started drifting into the house again.

The beauty of Red-eyed Vireos is soft and subtle rather than flashy. Their soft colors are accentuated by their eye line, dark-bordered cap, and bold red eye. I took several photos after the little guy looked like he’d make it—it was pretty amazing to get such great looks, even though the reason was such a sad one.

Red-eyed Vireos are very common birds, and not particularly shy, but they aren’t the least bit interested in us, so even as they don’t actively avoid us, they aren’t attracted toward us either. They can sing phrase after phrase for a minute or longer without moving their body, but as their face points in different directions, the song seems to jump from place to place so we can have a hard time picking up on their location for close looks. Unlike most songbirds, they’re such persistent singers that we can hear them throughout the morning and afternoon, and they are often heard singing well into August and even early September.

Many decades ago, Roger Tory Peterson estimated that the Red-eyed Vireo was the most abundant songbird over much of the continent due to its abundance in forested habitat. The species continues to be very common, but most ornithologists consider some birds with more generalized habitat needs, such as Red-winged Blackbirds and American Robins, to be much more abundant. This doesn't mean Red-eyed Vireos are in trouble, not by any means. Indeed, their numbers have increased fairly steadily since the Breeding Bird Survey was begun in the 1960s. 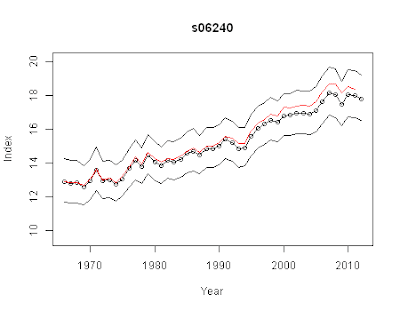 There is a 50% chance that any bird that flies off after a collision will end up dead—concussions and subdural hematomas can kill them even days later. But I’ve been hearing what sounds like the same individual Red-eyed Vireo in the yard ever since that day when one hit my window, without any noticeable gaps or any noticeable competitions between two males. As of June 29, he’s still singing away, and I’m hopeful that the persistent male I'm hearing is my special guy. Hope may be the thing with feathers that perches in the soul, but ironically it’s us humans—even well intended ones like me—who hold the power to rob birds of all hope.