Gray Jays: The Black Labs of the Bird World


Last month, a catbird alighted on my dog Pip’s back, totally freaking out the little puppy. Lots of people thought the hilarity stemmed from the fact that it was a catbird landing on a dog—something that oddly enough hadn’t even occurred to me. I thought the funny thing was that Pip’s ears shot straight up for a moment, like the stereotypical surprised dog in old movies.

My friend Lisa Johnson, one of the people who instantly latched onto the dog vs. cat(bird) concept, took a little camping trip up the shore a ways a week or so ago, where she and her own dog had an encounter with two birds, but instead of the birds getting a literal rise out of her dog, they made off with his dog food. Gray Jays always figure anything on their home range belongs to them, so they assumed the kibble was intended for them. They stuffed their beaks full, carried off their plunder, and came back for more. She speculates that they must be like dogs, to eat so much dog food. 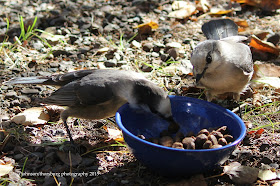 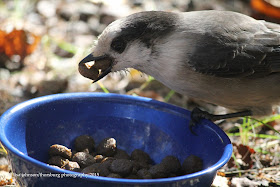 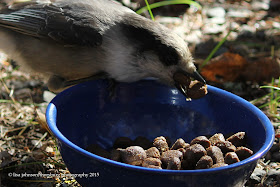 Lisa is a dog person so naturally wanted to figure out which breed the jays were most like. She noticed that their saliva coated the kibble in the same way that a black lab's saliva coats tennis balls.

Dogs, of course, aren’t adapted for water conservation in the same way that birds are—a panting Black Lab can leave an unwanted supply of mucus on our lap when the dog’s just trying to be friendly. 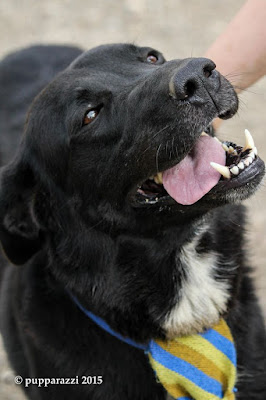 Gray Jays would never do such a thing—birds keep their bodily fluids inside their body where they belong (well, except when they have a purpose in getting rid of them, as anyone who stands beneath flying gulls or pigeons quickly learns). If a bird must pant, it sensibly engages in what is called gular fluttering, vibrating its throat where fluids that evaporate to cool it can re-collect rather than being lost outside the body.

Yet Lisa’s observation that the jays were coating their kibbles with saliva was accurate, and she took photos to prove the case. 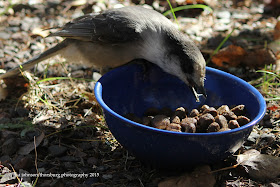 What’s the value of coating food with mucus? This is the time of year when Gray Jays are most focused on collecting food, including whatever fresh meat they can find. They eat some of it right away, but store a lot until their nesting season, which begins by early March even in the coldest parts of their range. The saliva works as a preservative, keeping the food edible even during normal brief winter thaws. Interestingly, there’s no evidence that a black lab’s saliva-encrusted tennis balls ever decay, either.

Black Labs are great retrievers in the sense that they bring back those saliva-encrusted tennis balls as well as game birds; Gray Jays retrieve the saliva-coated food items they’ve stored away with accuracy levels that could top any dog in a field-trial. 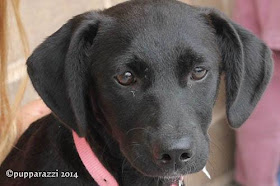 Gray Jays and Black Labs share some other important traits, including intelligence. They both look extremely agreeable and are indeed sweet natured with their families, but both are also strong-willed and independent. They're both hardy in cold weather, and both like eating dog food, cheese, meat, and peanut butter. Baby Gray Jays are solid sooty gray, almost as dark as black labs, and in both species, males are larger than females. 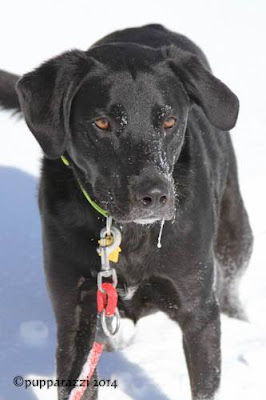 Of course, Gray Jays aren’t exactly like black labs with wings. While a black lab male can weigh up to 75 pounds, a male Gray Jay averages only 75 grams: little more than 2 ½ ounces. That means that one black lab would balance 454 Gray Jays, which is a lot of jays.

Gray Jays don’t bark—on the contrary, they’re exceptionally quiet. Both species get food from people, but while black labs play the role of subservient pets, Gray Jays live up to their reputation as “camp robbers.” Even when one takes food directly from a person’s hand, it’s as wary and cautious as the Artful Dodger, and instantly bolts if the person makes any untoward movement or sound.


We may feel, on an outdoor adventure with our dog, like we’ve made friends with the local Gray Jays, but when we go home, it’s the dog, never the jays, who happily follows along. We humans and our dogs may visit the world of Gray Jays, but their proprietary attitude toward everything on it, including our food and our dogs’ kibble, makes it clear that we’re the ones trespassing. Gray Jays never forget that the wild world belongs to them, not us.