All albatrosses, great and small

The seabird that we call “the albatross”—the one memorialized in Samuel Taylor Coleridge’s epic poem The Rime of the Ancient Mariner—is actually a whole family of seabirds that ornithologists include in a larger group, the order Procellariiformes, nicknamed “tubenoses.” All birds have an enlarged nasal gland—a “salt gland,” at the base of the bill, above the eyes. In most land birds and freshwater birds, this salt gland isn’t functional. In the case of loons, which spend winter on the ocean, it swells up the moment the bird tastes saltwater. The salt gland’s job is to remove salt from the bloodstream; as it pulls the salt out, it creates a 5 percent saline solution that drips out or is forcibly ejected from the nostrils. In albatrosses and other tubenoses, the salt glad is always active, and the salty secretions flow out of the body through those tubes.

The order Procellariiformes includes shearwaters and petrels, storm-petrels, and albatrosses. All of these tubenoses spend their lives over oceans, coming to remote islands and atolls, and some to rocky coastlines, only to breed. They all seem to float effortlessly over the water, using dynamic soaring and slope soaring to cover great distances with little exertion, but within the order, the albatrosses have the most exceptionally long wings. Albatrosses eat mostly squid, but also take fish, fish-eggs, and crustaceans; they scavenge as well as picking up live prey.

Most tubenose species are declining, and the order includes a great many globally endangered and threatened species. Every one of the 22 species of albatross recognized by the International Union for Conservation of Nature is listed at some level of concern; 3 species are Critically Endangered, 5 are Endangered, 7 are Near Threatened, and 7 are Vulnerable. What is causing their decline? Overfishing and climate change have reduced their food sources, and commercial fishing kills them directly as by-catch. Feral cats, rats, and other introduced predators destroy eggs and chicks on their remote breeding grounds. And all kinds of marine pollution are poisoning them.

Most albatrosses spend their lives in the South Seas, but the Laysan and Black-footed Albatrosses, both fairly small by albatross standards, are exceptions, nesting in the Hawaiian Islands.A full 99.7 percent of all Laysan Albatrosses nest in the northwestern Hawaiian Islands, with the largest colonies on Midway and Laysan Islands. Small populations of Laysans are found on the Bonin Islands near Japan and the French Frigate Shoals, and some are beginning to colonize islands off Mexico and in the Revillagigedo Archipelago. When away from the breeding areas, Laysan Albatrosses range widely from Japan to the Bering Sea and south to 15°N.  One particular Laysan Albatross named Wisdom, now famous as the oldest known wild bird, nests on Midway Island.

I’ve only seen Laysan Albatrosses once in my life—my family went to Hawaii in 2000, and on our last day, we hiked up the famous Diamondhead on Oahu. When I stopped to catch my breath, I spied two albatrosses way, way off in the distance. I saw a few different Black-footed Albatrosses on DebiShearwater pelagic trips during my Conservation Big Year in 2013, and got photos of them. I’ve yearned to see a breeding colony of any species of albatross, but have never had the opportunity.

Laysan Albatrosses arrive on Midway Island in early November, males appearing a week or so before females. To ensure that the pair bond will be strong enough to survive long absences as one bird heads off to feed, so the bird waiting with the chick can be certain the mate will return, courtship is a complicated, prolonged affair, designed to help birds choose a mate they can rely on. Their elaborate courtship dance synchronizes their breeding behaviors and their internal physiology as well. After the mother lays the single egg at some point from mid-November through mid-December, she flies out to sea for several weeks while the father takes incubating duty. More experienced females with an already-established pair bond produce their eggs earlier than younger females or the older females that had to replace a lost mate that season.

The population of Laysan Albatross on the island of Oahu have a skewed sex ratio, with two males for every three females. When all the suitable males are taken, some of the surplus females form a strong pair bond with another female; when one of these females entices a paired male into a quick dalliance with her, she can produce a viable egg which the two females raise together as well as any other pair would do.

After the mother returns from her post-egg-laying break, the parents switch off incubating duties, with one or the other always in attendance. The egg hatches about two months later, between mid-January and mid-February. 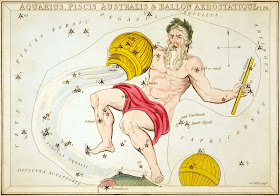 We humans, who include within our numbers the only rocket scientists and brain surgeons on the planet, are not the only species that uses stars for navigating by night, but we do seem to be the only species with members who believe our character and future are dictated by our Zodiac sign. It’s hard to say what the right system would be for figuring out an albatross’s sign. Human birth marks the moment a baby leaves the mother’s body, draws its first breath, and can be seen as a living, breathing being—those simultaneous events determine the human baby’s sign. Birds aren’t “born.” Would a bird’s sign be determined by the point at which the young bird leaves the mother’s body in egg form, in which case virtually all Laysan Albatrosses would be Sagittarius? Or would it be when the baby pips—that is, makes its first visible crack in the egg and draws its first large breath of fresh air; or about 3 ½ days later when it actually hatches? Either of those second events would place virtually all Laysan Albatrosses in the sign of Aquarius. Yet Laysan Albatrosses are individuals, and each has an individual destiny, despite them all sharing the same “sign.” Oddly enough, this kind of information does not seem to deter people from believing in horoscopes.

Albatross young depend on their parents for a long time—it takes over 5 months for the 6-ounce hatchling to reach its fledging weight of 4 ½ pounds. For the first couple weeks, the chicks must be fed daily, and one parent is always present. But the chick’s growing need for larger meals soon forces both parents to forage more often, and they start traveling greater and greater distances. Within a few weeks, the parents start returning only every few days, and eventually may stay away for up to 17 days. One adult marked with a transmitter was located 1600 miles from the nest during one of these foraging bouts, but it faithfully returned to feed its chick.

To feed the chick, the parent regurgitates its own fishy stomach contents along with special oils manufactured in the digestive system—so baby food for albatrosses depends on clean oceans. Unfortunately, our oceans are hardly clean anymore. On top of water pollution and depleted fish supplies, the birds confuse floating bits of plastic with the dead bits of squid and fish they scavenge on. On Midway Island alone, it’s estimated that Laysan Albatrosses feed their chicks an estimated 5 tons of plastic every year!  The chicks on Sand Island in the Midway Atoll National Wildlife Refuge also ingest lead-based paint chips when picking at the soil around their nests. The lead originated from the buildings and structures on the island, some of which date back to the early 1900s.

Samuel Taylor Coleridge’s poem, first published in 1798 and revised more than once until his death in 1834, contains the lines:

He prayeth well, who loveth well
Both man and bird and beast.

He prayeth best, who loveth best
All things both great and small;
For the dear God who loveth us,
He made and loveth all.

These lines probably inspired the Anglican hymn “All Things Bright and Beautiful,” by Cecil Frances Alexander, which was first published in her Hymns for Little Children in 1848. We humans have a long history of treasuring the beautiful elements of our natural world.

But like that ancient mariner, we also have a long history of abusing the most beautiful and innocent elements of that natural world. We’d be more likely to do something to turn things around if we were forced to wear the grim carcasses around our necks, to remind us of our environmental sins.

If more people could see these magnificent birds on the ocean or on their breeding islands, perhaps we would work harder to protect them. The Cornell Lab of Ornithology is providing the nest best thing: a high-quality nest cam showing the activity on four Laysan Albatross nests on Kauai. (Two eggs have hatched; the other two, belonging to female-female pairs, were infertile.) Perhaps watching these beautiful chicks and the devoted parents will inspire more of us to press political candidates and parties to make wildlife protection an important part of their platform. 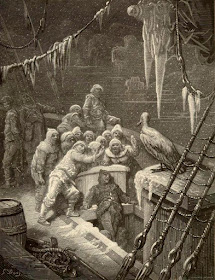