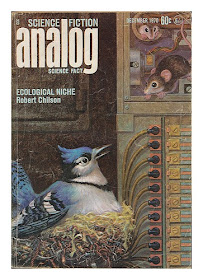 Last Saturday I sat down with my family to watch the movie Star Trek IV, about how Admiral Kirk and his crew save the world through time travel by bringing a humpback whale family into the future from the 20th century.  Since whales are almost as interesting as birds, this is definitely my favorite Star Trek movie, in spite of the fact that the only birds in it are a flock of pigeons in the parking lot of the whale museum and some gulls flying near the San Francisco Bay.  Birds in science fiction movies are few and far between, so birders have to take what we can get.  In the entire cantina scene in the movie Star Wars, not one feathered creature can be seen.  Some of the strange beings are clearly reptilian, others mammalian, some are insects, and some are beyond classification, but not one bird is among them.

The lack of birds in science fiction surprises me.  After all, the flight of birds inspired the first designs of airplanes and helicopters, and even man's first dreams of touching the moon were probably inspired by birds, since for centuries people believed that birds left the earth for the moon every autumn.  The superior vision of birds, their sense of geomagnetism, and the unique aerodynamic and insulating properties of feathers would seem to be fertile soil for a story about some ultimate test of superiority on earth.  In some of the earliest, most primitive science fiction flicks, giant prehistoric-looking birds were featured, but from E.T. to Tribbles to Chewbacca, modern science fiction creatures have been more closely related to Mickey Mouse than to Donald Duck.

The same is not quite true of science fiction literature. Analog magazine has published at least a few memorable stories focussing on birds.  My all-time favorite is Robert Chilson's 1970 story, "Ecological Niche."  The cover illustration is of a Blue Jay who constructed its nest from electrical resistors and wiring from a futuristic city which had tried to exclude all natural things from within its confines.  That story prominently features whip-poor-wills, Great Horned and Barred Owls, and House Sparrows.  The point of the story, that at least some wildlife will manage to adapt to just about anything man can build, is something Ring-billed Gull haters in Duluth should consider.  At the end of the story, when asked what he thought about birds, the director of the futuristic city said, "You mean inside the city?  I think they're a bunch of nasty, noisy nuisances, of course, same as everybody else."  "In that case," the main character told him, "I suggest you learn to love them. Because...they've learned to live with you."  Yep, for a birder, that was one perfect science fiction story.

There are other interesting science fiction stories featuring bird, too. Poul Anderson's 1973 story, "The People of the Wind," is about the difficulties of bird people and humans surviving together on one planet.  This story has such lines as "You talk like a human supremacist," "O God to have real wings!" and "He donned a leather helmet and lowered the goggles which were his poor substitute for a nictitating membrane."  It also discusses at some length the anatomical and physiological properties of human-sized birds.

The 1984 story "Summer Solstice" is about a biologist bird from another galaxy searching the universe for a featherless biped specimen to collect for science.  Naturally he finds his way to earth.  The author, Charles L. Harness, isn't quite as informed as Poul Anderson about ornithology, but it's an interesting story nonetheless.  Yes, if you look hard enough, even science fiction can give you the bird.
Laura Erickson at 5:42 PM
Share