The Poetry of Stephen Ingraham

For the Birds audio version here. 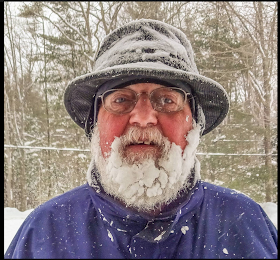 One of the richly rewarding elements of birding is friendship: we forge many warm ties with kindred spirits. I met my friend Stephen Ingraham about 10 years ago, when we spent a lovely day in the Sax-Zim Bog in the company of a Northern Hawk Owl. Since then, our paths have crossed at birding festivals, and in 2014, he invited me along on a birding tour to Germany, Austria and Hungary, to test the new Zeiss Victory SF binoculars. In October he’ll be one of the leaders when I go to Cuba.

Steve is also one of my friends on Facebook. I love his posts—they’re virtually always nothing but lovely photos of birds and natural landscapes, often enhanced with Steve’s lyrical and evocative prose. And this year he started posting a poem of the day, showing a really cool inventive side. I was tickled by his poem for March 16, which he wrote from his home in Kennebunk, Maine:


I opened the back deck
door to chase a squirrel
from the bird feeders
only to be hit square in the
ear by a Cardinal song...
first of the season.
Spring come calling
loud and clear.
It even made me more
kindly disposed, for a
second, to the squirrel...
before I chased it away.
Spring comes as a cure
for many ills...
but not all of them.


A month from now the
woods at Laudholm will be
alive with bird song,
but these last days
of March, even with
the earth now tipped
toward the sun, you
mostly hear the chill
wind in the treetops, and
the distant sound of surf.
But wait, is that the
far off drumming of
a grouse? and there,
toward the marsh, a
single Red-wing Black-
bird calls, and of course,
a few Robins in flight
and song, and the
ever-present crows.
And yet I am unprepared
for the vernal pool along
the Muskie Trail, loud,
surprisingly, startlingly
loud, with the mating
chorus of wood frogs.
I can not quite believe
my ears, and so
bushwhack a bit for
a confirming glimpse
of bulbous eyes breaking
the still surface deep
in the tangle of the pool.
Does spring come riding
in on this rough chorus
of clicks and grunts,
raucous, rude, and
grating on the ear?
And yet, this March day,
I would not presume to
ask, or dare to hope,
for any sweeter song.