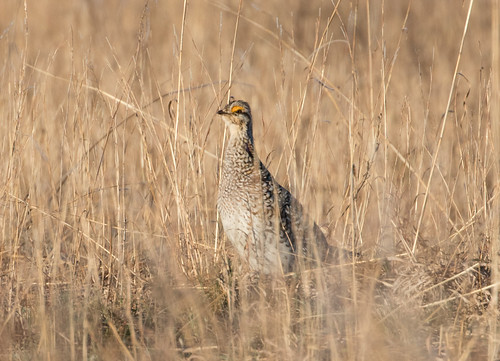 I spent two mornings last week in the Sharp-tailed Grouse observation blind in the Douglas County Wildlife Area—the blind operated by the Friends of the Bird Sanctuary. 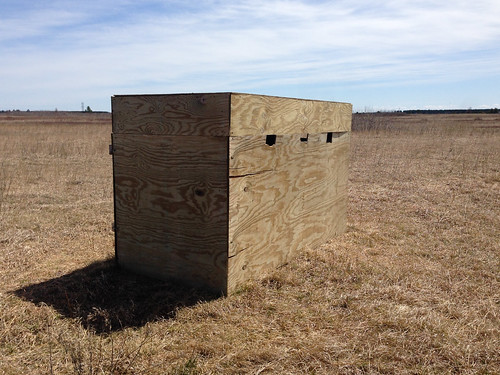 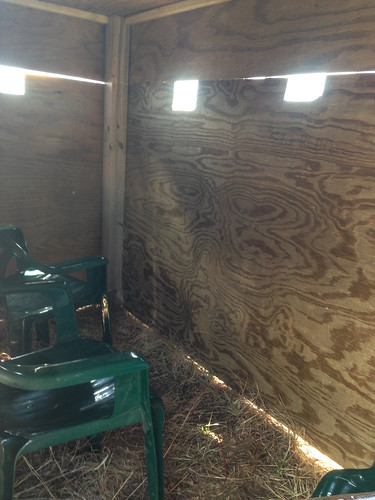 I arrived both days around 5:20 am—we're supposed to be there at least a half hour before dawn. I wished both times that I'd gotten there a few minutes earlier--it's always funnest to arrive before any birds are singing yet, so you can hear the exact order that they pipe in with, but some were already singing when I got there. On Friday when I pulled into the parking space, I could already hear grouse dancing quite a distance southeast of the normal lek, and I was afraid I wouldn't see any at all from the blind, but three flew in several minutes after I settled into the blind and stuck around until after 7 am. While I was in the blind both days, I left Pip curled up in her warm bed in the car.

On Monday, I could count 7 or 8 males dancing. A female came in for romance three times. She may have been one individual, or two or three—grouse don't wear name tags so  it was impossible for a mere human to know for sure. On Friday, it was only the three males.

Some males will keep hanging around for weeks. If a female loses her eggs or chicks early on, she’ll be ready to start again, and any obliging males will get another opportunity to plunge into the genetic pool and try to swim out a winner. But males intent on survival start conserving energy and being more secretive once most females are sitting on nests and ignoring the males for another season. Displaying is dangerous—concentrating so hard on other grouse makes it hard to notice any Red-tailed Hawks, Northern Harriers, or eagles overhead, or any prowling mammalian predators. Pip and I came upon a nice pile of wolf scat Friday on the path from Grouse Road to the blind. 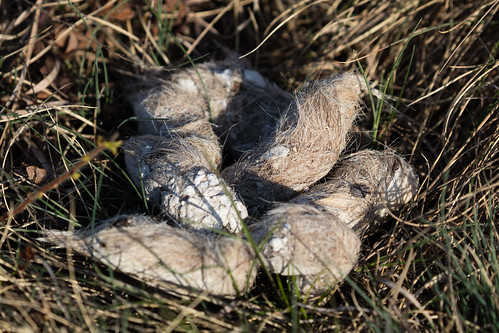 On Monday I set up my directional microphone toward the display area as soon as there was enough light in the blind for me to see what I was doing. It was still twilight, but by then a Brown Thrasher and Vesper and Field Sparrows were singing away. The last time I made sound recordings in this blind was in 2005—11 years ago now. The background noise from traffic from Highway 53, over a half mile away, is a bit louder and more persistent now. Fortunately, there weren’t any wind sounds at all.

I didn’t get any good photos of the grouse displaying this time—their lek was a bit farther from the blind, and they were mostly hunkering down in a weedy patch affording them protection from predators. I took one video I like of a few displays. You can’t see the birds at all well, but do get to watch the triangular white patches of their behinds, erect and shaking as they dance about. 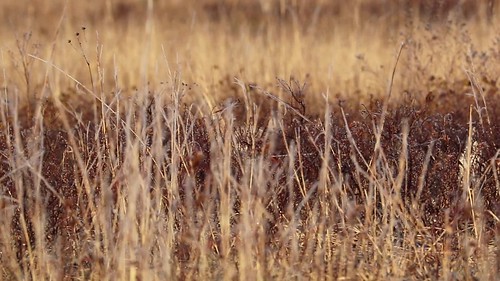 I did get lots of photos of Vesper Sparrows, mostly when I was scouting on Sunday afternoon and then when I was returning to my car after my mornings in the blind. 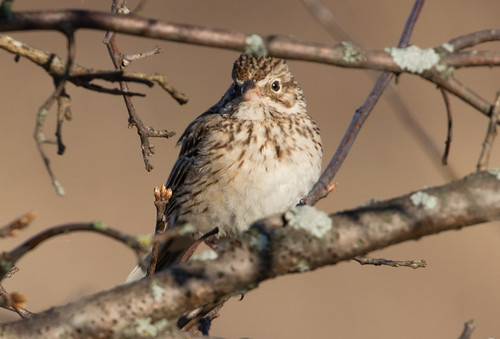 If the grouse were less conspicuous on Friday, more birds of other species had arrived. Two Upland Sandpipers alighted near the blind. I’m not sure where one was—it may actually have been on the roof of the blind, because its calls sounded very mechanical—but the other was nice and close, with a perfect view out of one of the windows, so I got several photos and video. 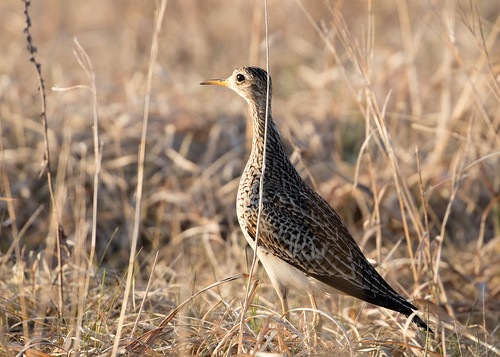 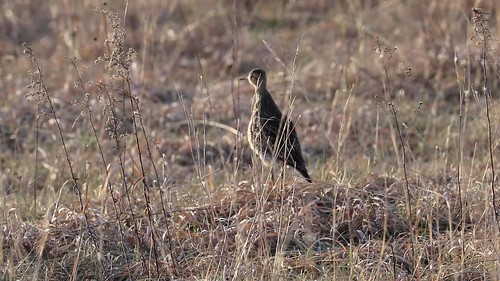 Friday morning was just too perfect to head home after the birds stopped displaying, so Pip and I walked and drove around a bit first. We watched the Upland Sandpipers doing their sky dance, and spent a bit of time with some Brown Thrashers, a Song Sparrow, and some Tree Swallows. 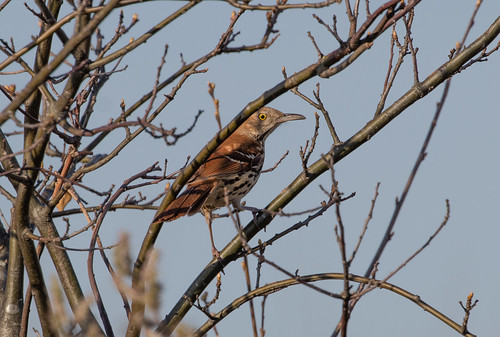 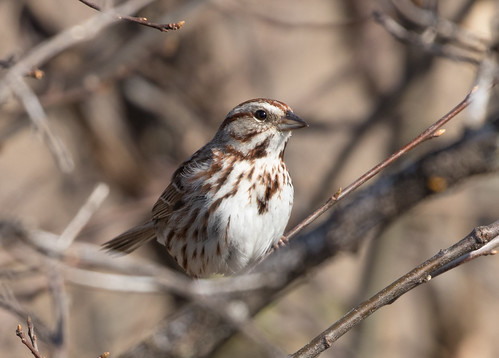 At one point while we were driving along, I could hear towhees singing on either side of the road. I stopped the car between them, and took photos of the one on my side of the road—that was the one in perfect light. 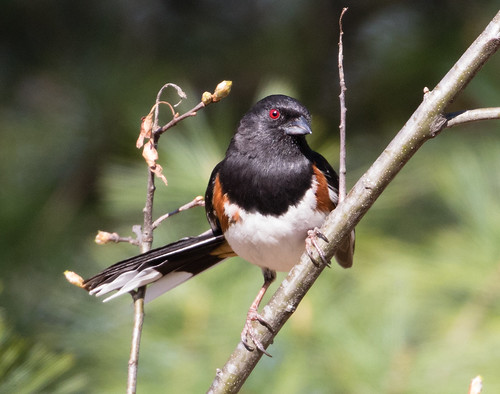 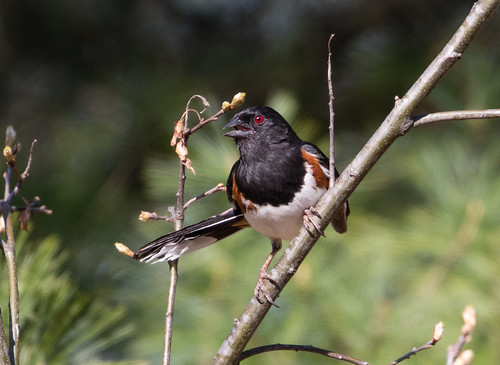 By then it was getting late, so Pip and I headed on, grateful to the Friends of the Bird Sanctuary that the Douglas County Wildlife Area is in such good hands. 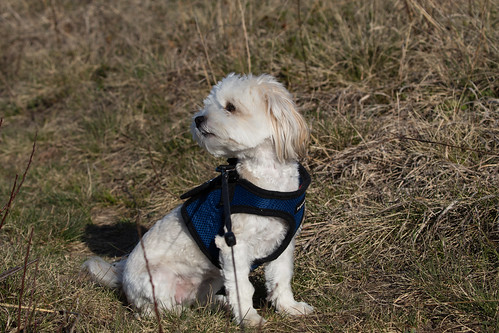 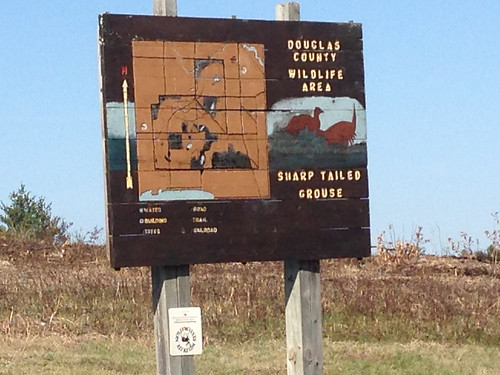