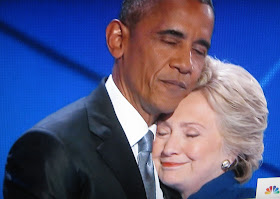 It occurs to me that the first person ever to sense the inevitability of a Hillary Clinton presidency was Charles Koch. The danger of a brilliant, hardworking, popular woman standing up to him and his empire is why he started an ugly smear campaign directed as much at the First Lady as at the President himself--something unheard of since Andrew Jackson.

The Koch-created think tanks and other right-wing groups started with ugly rumors of murder (!!!) when one of her close friends committed suicide, and have thrown more and more mud at her when any ugly little mind could conjure it.

I will never, ever forget when Rush Limbaugh got away with calling Chelsea--a LITTLE GIRL--the "White House dog." Seriously--imagine that. Imagine that he said it in the first place, but then realize that no one fired his ass for saying it on the air, and that his listening audience didn't shrink but grew! That proved there really was a "vast right-wing conspiracy," and they could get away with anything at all for lo these many years.

My children, in their 30s, are too young to have been able to see Hillary Clinton without all those mud spatters hurled at her by people so scared of her for so long. They'll never see the optimistic, hard-working young woman who tirelessly worked in so many places in so many capacities to make life better for people. How can people who grew up since the 90s not buy into the "no smoke without fire" narrative after so many people have been manufacturing that smoke for lo these many years?

Now, to see people my age--people who lived through all that but have somehow forgotten it--maligning her for conjured up shit, or whining that she sounds too "scolding" or "bitchy" or "nagging" or "too ambitious." I never hear those words attached to male politicians; to hear people saying how much they've looked forward to a woman as president but how disappointed they are that this tainted, scandal-ridden woman of all people could be the first—that makes me want to cry. I am so proud of a woman who kept on getting up and kept on fighting, against all odds. I can't think of anyone else on the planet who has fought so hard for so long, who has worked so hard for so many, against so very many odds. There is no one who more deserves my vote.