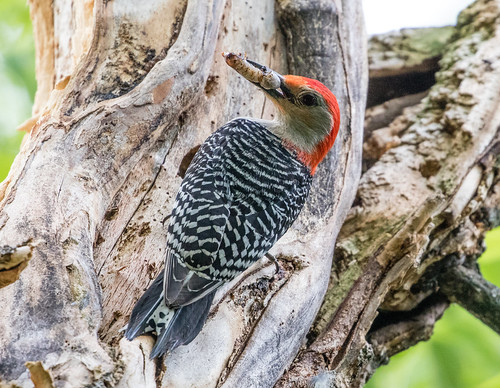 I’ve been checking on my Red-bellied Woodpeckers every day, and every day the chicks, still entirely hidden in the cavity, get noisier and more insistent. When I returned from Maine on June 15, probably only a day or two after they’d started hatching, I couldn’t hear any sounds during feeding time; it took a few days before I could pick up tiny whispery sounds, and I needed my hearing aids to pick up that. When the parents came in with food, they usually brought a few small items, and they spent a minimum of two or three minutes inside the cavity feeding the young, and probably brooding them to help them maintain a healthy body temperature. Baby woodpeckers hatch out in a very undeveloped state, and need a lot of gentle attention to survive, much less to thrive.

As the days passed, the little guys first grew louder during feedings, and then could be heard for seconds, and then minutes, after the parent left the nest. Now I’ve been back for almost three weeks, and the ever-growing babies are keeping up their insistent begging even longer. They’re staying below the cavity entrance so I still can’t see them, but over the weekend the parents started holding food at the entrance now and then, reaching in several times as if to entice them to the entrance hole. Through Sunday the parents still had to go all the way in to reach the chicks, but on the Fourth of July, the babies could climb high enough that both parents could deliver the food while remaining at the entrance hole. Any day now I’ll see the first baby face. 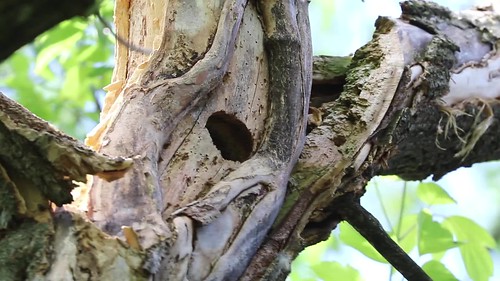 The nestlings take the food as fast as the parents can deliver it, so feedings are short and sweet—sometimes literally so, because now the parents sometimes bring berries as well as insects. Insistent calling draws the parents back much more frequently now, often with just a single big grub, and feedings last only one or two seconds. 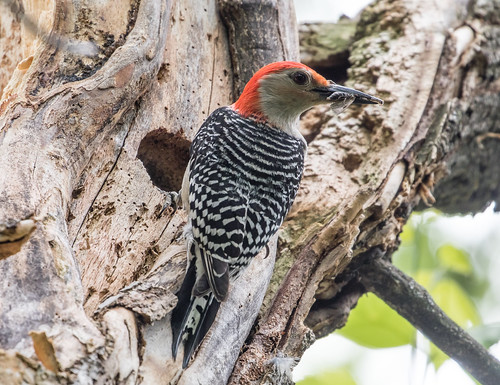 On Saturday morning, July 2, in one 15-minute period the parents came in 10 times; in the next 21 minutes, they returned only 3 times. On the videos I made, you can hear Hairy and Downy Woodpeckers, flickers, crows, robins, cardinals, Chipping Sparrows, and a Red-eyed Vireo. The Red-bellied parents pretty much ignored them unless one was in the actual nest tree—then a parent would dive-bomb it, sometimes hitting it hard rather than simply giving a warning.

On Tuesday, June 28, a baby squirrel fell asleep on the broken limb on one side of the cavity opening while an older squirrel groomed itself on the limb rising above the opening. The male Red-bellied Woodpecker was inside the cavity, looking back and forth between the two, for about a minute after I arrived. It’s not that he was afraid to tangle with squirrels, but he seemed to be weighing how probable it was that one would enter the cavity while he was attacking the other. He bided his time until the female flew in and aggressively dive-bombed the baby squirrel. Branches obscured my view of much of the action, but she appeared to actually knock the little guy off the branch. I disapprove of squirrels raiding nests, but this little guy was napping, and I’m partial to baby squirrels, too, so I was glad when the little rodent caught the trunk and scurried safely away. Meanwhile, the male Red-bellied came out and the pair drove off the larger squirrel together. Squirrels and chipmunks eat a disconcerting number of baby birds, so diligence is essential even as it distracts from the essential search for food for growing babies.

I start hearing the parents about five minutes before sunrise every morning, and they keep at it, hour after hour, until about sunset. Once the babies fledge in a week or two, the parents will have to maintain their vigilance over a much larger area as the fledglings learn to negotiate the world. Last year I was seeing young Red-bellieds with their parents into September, so raising babies is an all-consuming commitment through the entire season that many of us humans take our vacations, and they can never leave those young at a daycare center for an hour’s respite. Raising baby woodpeckers is not for the faint-hearted, and woodpeckers play such a central role in forest ecology that raising young ones is a job that makes every one of our lives better. They deserve our gratitude. 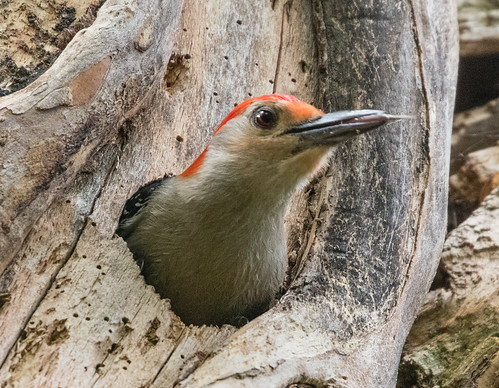