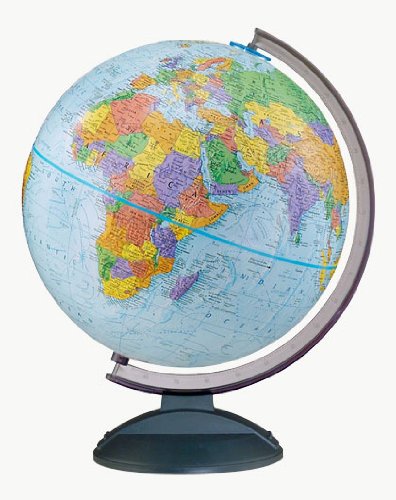 The equator, that imaginary line bisecting the northern and southern hemispheres of our planet, famously runs across Ecuador—the country whose very name is derived from “equator.” Of course, the precise location of the equator is not fixed; the true equatorial plane is perpendicular to the Earth's spin axis, which drifts about 30 feet every year. We humans like precision even in imaginary constructs. 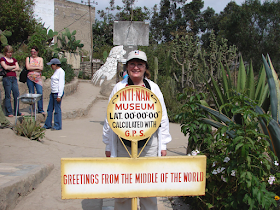 I supposedly straddled the equator at a famous monument near Quito in 2006. Oddly enough, this was a replacement monument—there was already a beautiful statue of the earth marking the equator a short distance away, but GPS drew the line in a slightly different place than the original surveyors had. And because of the earth’s axial drift, neither monument could definitively mark the equator every day of the year. 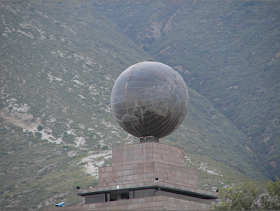 This September, I crossed the equator on my flights to and from Peru. Some maps show the tiny northernmost tip of Peru above the equator, but apparently none of Peru is currently considered to be north of the equator thanks to the settlement of a bitter territorial dispute between Peru and Ecuador. Some Peruvians still claim that the equator passes through that tiny northern tip, and it’s easy to find maps on the Internet showing the equator crossing Peru. One person posted that Ecuadorian Immigration Police confiscated one of his guidebooks when he crossed from Peru because that book had a map showing the equator crossing Peru. Imaginary lines mean a lot to us humans.

This month, when I visited Uganda, I crossed the equator several times—it runs just on the outskirts of Entebbe—and I got a photo of me straddling the northern and southern hemispheres at one commemoration site. As much as African nations are famous for their bitter disputes, they don’t seem to fight over whether and where the equator crosses within their boundaries.


Peru, Ecuador, and Uganda are all home to endemic bird species that can be found only within tiny ranges, defined by such geographical features as a particular slope of a particular part of a mountain range. My trips this year to Peru and Uganda focused a lot of attention on these endemics. Birds can fly, and so it seems mystifying to us humans why these rare species don’t spread beyond their tiny ranges, or at least occasionally wander somewhere else; it’s their innate inability to cross the imaginary lines forming their species’ range boundaries that makes these species so rare. Yet even these most finicky endemic species pay no attention whatsoever to national borders or the equator. Human-constructed imaginary lines bear no importance whatsoever to birds.

In September, while I was on the far side of the equator in Peru, over 4,000 miles from home, I was still in exactly the same time zone as Duluth, Minnesota. Of course, time zone lines are even more bizarrely imaginary than the equator—if I left for Peru today, there’d be a one-hour difference because now Duluth is on Central Standard Time, not Daylight Savings Time. When I left for Uganda on November 5, there was an 8-hour difference between the time at home in Duluth and the time in Uganda, almost 8 thousand miles away; the day I arrived, the difference was 9 hours thanks to the US switching that very weekend back to Standard Time. Jet lag has nothing to do with the equator but with an entirely different set of imaginary lines—those of longitude, related to which part of the earth is in daytime or nighttime at any given moment.

Most bird migration involves far greater movements between north and south than east and west, so few American birds need to reset their biological clocks as we human Americans do when we travel outside the Americas. My internal clock is just about back to normal now, as I get back into non-migratory, chickadee mode.

Exciting as it is to cross so many imaginary lines now and then, it’s always wonderful to return to my decidedly non-imaginary little chickadees. They can be found in 8 different time zones in North America, but each individual chickadee lives in just one unless its home range is right on the border between two zones, and regardless, it pays no attention to clocks, waking up just before sunrise wherever it happens to be and retreating to its nighttime roost at about sunset whether we humans are honoring some ridiculously imaginary daylight savings time or not. I’m glad I’m spending Thanksgiving with chickadees. As Robert Frost almost said, “Home is the place where, when you go there, they have chickadees.”