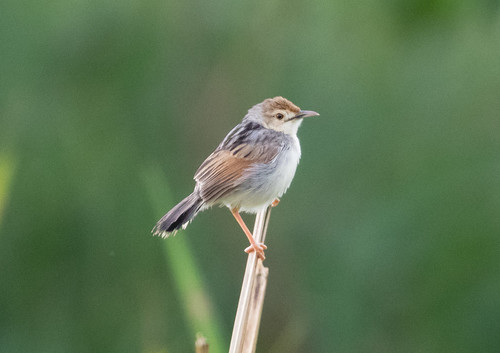 When I was in Uganda, we saw a bunch of drab songbirds called cisticolas. Many of the species in this group are named specifically for the sounds they make: there is a Singing, Chattering, Whistling, Trilling, Bubbling, Rattling, Tinkling, Wailing, Churring, Chirping, Croaking, Piping, Zitting, and Wing-snapping Cisticola. I’m not sure how the Winding Cisticola got its name, because it doesn’t sound like someone is winding a clock, but thinking about all those names derived from the birds’ vocalizations made me think about other birds whose names conjure sounds.

One of my California birding friends, Jennifer Rycenga, just posted an intriguing thought on Facebook. She wrote, “You know what's kind of weird? Trumpeter Swans sound like trumpets with their mutes in, which would really make them Muted Trumpeter Swans, except that would be too confusing, since there's a species called Mute Swan.”

Jennifer got the idea from Brian Wilson in the song “Surf’s Up” on the Beach Boys’ Smile album. One stanza goes:


The music hall; a costly bow
The music; all is lost for now
To a muted trumpeter's swan

The Trumpeter and Mute Swans are the two found regularly in America that are named for their sounds, or lack of sounds. When I started birding, our third swan, what we now call the Tundra Swan, was the Whistling Swan for its calls.

Geese are known for their honking, but none of them are officially called honkers. Our Cackling Goose—the tiny species that other than size looks like a Canada Goose—is the only one whose name refers to its sound. And no ducks are called quackers or anything else that might conjure their calls except one group. The ones formerly called tree ducks are now called Whistling-Ducks.

In North America, only one bird has “laughing” in its name: the Laughing Gull. But around the world, there’s a Laughing Dove, Owl, Kookaburra, and Falcon, and a large group called laughingthrushes.

I live with an Eastern Screech-Owl who has never in the 16 years I’ve lived with him screeched.

Fully 160 birds in the world have “babbler” in their name. Catbirds mew. The Barking Owl of Australia and Papua New Guinea barks, but no birds are called dogbirds. Bellbirds make a cool ringing sound—I recorded a Bearded Bellbird in Trinidad in 2001—that was the #1000 bird on my lifelist. 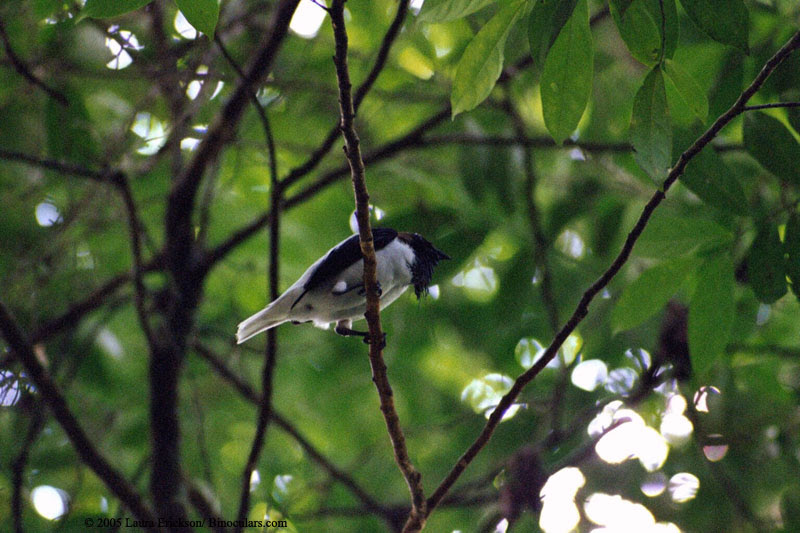 Some bird names are obviously onomatopoeic for their vocalizations, such as the Killdeer, various cuckoos, the whip-poor-will, pewees, phoebes, and chickadees. The Bobolink’s name is ostensibly onomatopoeic, but I just can’t hear the supposed Bobolink, bobolink. Spink! Spank! Spink! To me, Bobolinks sound like R2D2.

Common Loons are not named for their looney tunes. Despite the maniacal laughter that people often think makes them “looney,” our name for the loon comes from an old Scandinavian word for someone who is lame, referring to the loon’s inability to walk on land. In Great Britain, loons are called divers, and some ornithologists think we should change the American name to Great Northern Diver to match the name in the U.K. Juliet was right that “that which we call a rose by any other name would smell as sweet,” but if a group of professional botanists suddenly decided to change a rose to something else, it would certainly be confusing, as changing the name of Minnesota's state bird would. What’s in a bird’s name? It may conjure sound, or fill birders with fury, but no matter what the species, it never signifies nothing.
Laura Erickson at 8:55 AM
Share