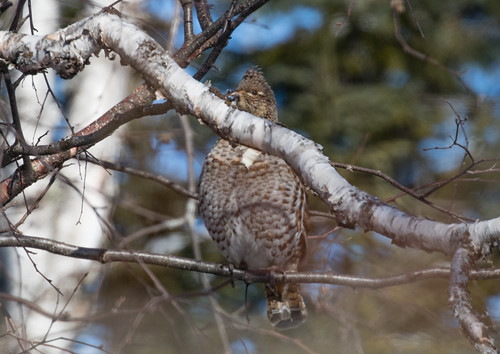 
Everyone knows…that the autumn landscape in the north woods is the land, plus a red maple, plus a Ruffed Grouse. In terms of conventional physics, the grouse represents only a millionth of either the mass or the energy of an acre yet subtract the grouse and the whole thing is dead.

In most of my day-to-day life nowadays, I don’t think much about Ruffed Grouse. Before my mother-in-law came to live with us four years ago, I’d hear them drumming at her place in Port Wing, Wisconsin, pretty frequently, and you can’t not think about Ruffed Grouse when that deep, resonant thudding pulses through your entire body.

The drums are a series of progressively faster thumps, which people used to think were produced by the male grouse striking his wings on his drumming log, but the sound is actually produced by air rushing to fill the vacuum created under the wings when they are rapidly flapped in front of the body. Males drum most frequently in spring, with a smaller surge in autumn, but as I noticed in Port Wing, you can hear drumming just about any time of year at least occasionally.

Ruffed Grouse are not part of the Peabody Street avifauna, which is part of why I so seldom think of them in my daily life now that I don’t stay in Port Wing anymore. I often encounter one along a roadside or up in a tree when I’m birding, but it’s always just one of many birds I’m seeing that day, seldom standing out more than other bird. When I see a grouse, I try to take photos, as I do with just about every bird I see, and often post those photos on my Flickr photostream, but I’ve never photographed a grouse drumming, and never taken a full-frame photo of one doing anything. My grouse photos are okay for small online illustrations, but aren’t particularly noteworthy. 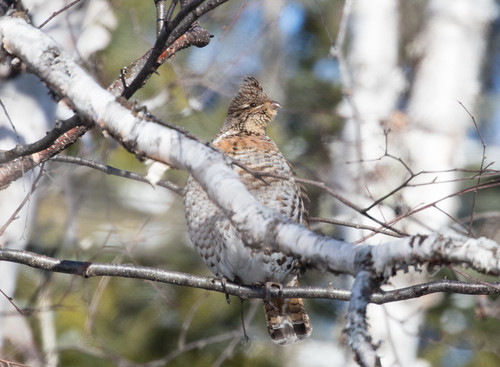 This past weekend, when I was birding with Lisa Johnson on Superb Owl Sunday, I took a bunch of photos of a Ruffed Grouse in a birch tree at Split Rock. I had pretty good lighting, but the bird wasn’t all that close, and lots of little twigs and even large branches obscured the view; regardless, I posted the best of the lot on Flickr. They weren’t any better than the vast majority of my bird photos, and were a lot worse than my best work. But for some reason, Flickr highlighted one of these pictures in a special group called Explore, and suddenly thousands of people were looking at it for a couple of days. 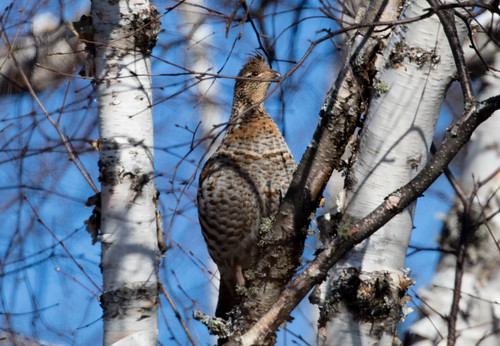 I wonder if part of the value of the photo is that most people don’t expect to see a bird usually associated with keeping its feet planted firmly on the ground sitting up in a tree. Much of the year, Ruffed Grouse walk along the forest floor, browsing on leaves and fruits along with insects, and in fall scarfing down as many fallen acorns as they can find. But once snow covers the ground, they switch to mostly eating woody aspen and birch buds near the tops of the trees.

They have two special adaptations, one internal and one external, to accomplish this. Inside their bodies, two blind offshoots of their intestines, called caeca, grow enormous in fall. Anaerobic digestion in the caeca breaks down cellulose so they can get nourishment from those woody buds. In spring, the caeca atrophy for the warm months.

Their feet also undergo an important change for winter. Tooth-like structures called pectinations grow from the scales on the toes in fall and are shed in spring. These structures, often referred to as “snowshoes,” significantly increase the surface area of feet, and so many people believe they help the grouse walking on the surface of snow. Gordon Gullion also believed they serve as grippers when a grouse walks on ice-slicked tree branches. Ruffed Grouse in northern areas with severe winters have pectinations twice as long as those in more southerly regions. When I’ve watched grouse walking in trees in winter, I’ve been impressed with their secure footing in icy trees, so I suspect Gullion was right about that. I even noticed that while watching the grouse in the birch tree, though I didn’t get any in-focus photos when it was walking straight up a smooth vertical limb.

So suddenly I’m finding myself thinking about Ruffed Grouse, and yearning to sleep in the woods where I can hear them drumming come spring, and try to get better photos of them. Meanwhile, when I’m out birding, I’ll be watching for them up in trees or on roadsides, and won’t be nearly so quick to take them for granted.