I was expecting today's temperatures to reach the 60s by the end of our walk, and our species count up in the 60s, too. As I write this on Thursday afternoon, the sun is shining and it's shirtsleeve weather out there, but not so this morning! It was 46 degrees when we were all done (even colder when we started!), and we finished up our Park Point spring warbler walks with barely more species than the temperature—47 species. There were probably a few more warblers among the ones high in the pine trees, but they seemed as cold and yearning for spring as those of us watching them. One Blackburnian Warbler hunkered down near the top—our sharp-eyed participants found it and helped me find it.

One courteous Pine Warbler sang a few times and gave us quick but clear looks. We had quite a few Chestnut-sided Warblers and American Redstarts, and Magnolias here and there. We had a quick look at a bedraggled fox lurking in the dunes and then walking far away down the beach—it's tough to be a predator.

There were absolutely no shorebirds on the ball fields, despite a couple of hundred Ring-billed Gulls and one Herring Gull. The only shorebirds we had at all were when we took one of the boardwalks through the dunes, following a couple of birders on their own. They showed us a nearby Spotted Sandpiper and also let people see through their scope two Red Knots (probably the same two that some birders saw earlier this week) way way down the beach. They took off and flew by. In the poor light, my photos are even worse than the picture of the Blackburnian Warbler, but regardless, these are the best photos I've ever taken of Red Knots in spring (which tells you how often I see them). They were a lifer for Pip! 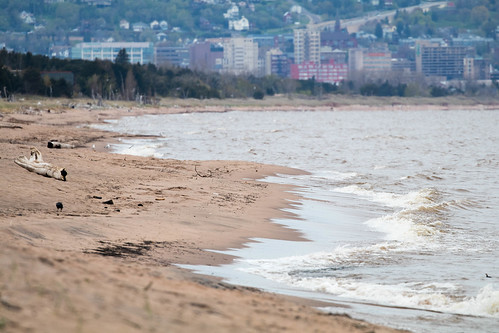 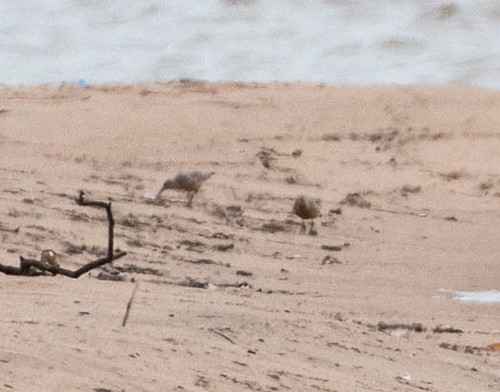 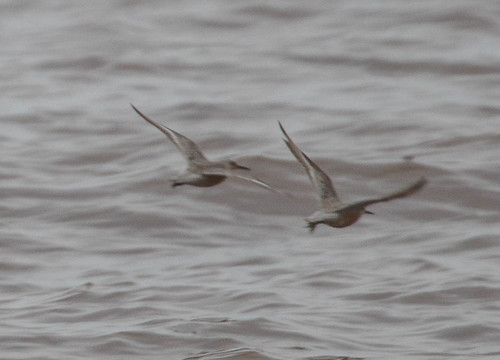 We had to work for just about all the birds today, and several were seen or heard by just one or two people. But everyone got to enjoy the little family of geese (normal broods have 5 or 6 goslings), and a "creche" of 31 goslings following an adult.

We also had three nice-sized flocks of migrating Blue Jays.

The cold, dreary day, even with lovely (if sparse) bird life, left us ready to get on with the rest of our day. But it was hard saying goodbye, too—these weekly walks have been really fun. We still have one more warbler walk at the Western Waterfront Trail on Tuesday, but then we'll have another 10 months before next April. It's weird to be finishing up the walks at Park Point when many migrants haven't even arrived yet.