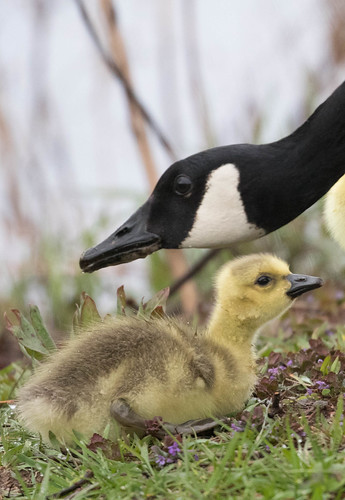 We began our Duluth Audubon Society spring warbler walks the first week of April this year, and ever since the very first walks on the Western Waterfront Trail and Park Point we’ve been watching Canada Goose pairs. First they were romancing, and then we started seeing females on nests, the male always nearby; when a female took a bit of a break to feed and stretch, the male was always right there with her. Geese are inspiring in how each pair works as a perfect team to raise their young.

By May I was growing more and more impatient to see baby geese. I know we have way too many Canada Geese, but their babies are extremely adorable, and I love photographing them. Some people on our warbler walks saw their first last week on Park Point, but I didn’t see any until yesterday. It was very cold, and one mother was hunkered down in the grass with babies sitting on her back, covered a bit by her feathers and wings. The mate got restless as I slowed down, so as much as I wanted a photo, I didn’t pull over—it seemed rude and selfish to risk disturbing the birds when they looked so cozy. When I was driving the other way leaving the point, I saw two families by the edge of the water, but from that side of the road I would have had to get out of the car, risking disturbing the parents—again, it didn’t seem worth it. 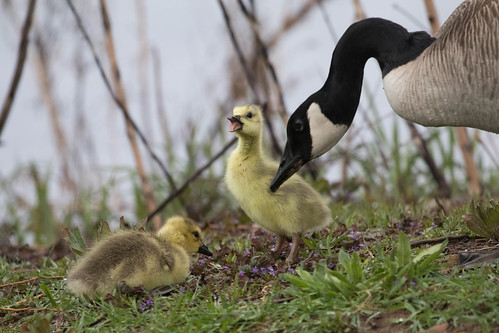 Then today, on the way to my Park Point warbler walk, the geese were close enough to the road for me to get several photos. I was thrilled—no matter what they do, baby geese do it in an adorable way. 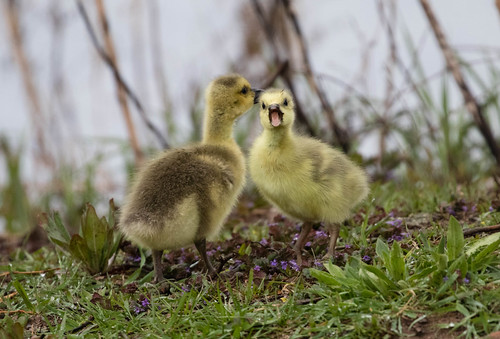 Baby geese are too innocent to understand danger even as they stay extremely close to their parents. The security the parents give them allows the baby geese to explore in as safe a way as possible this amazing world. Just imagine—less than a week ago, each one of these little birds was scrunched up inside a dark egg, warm and safe but hardly able to move. Did they have any inkling what the big wide world would be like? 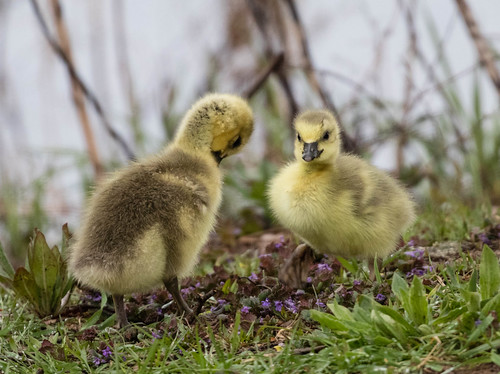 It was hard to break away from them, but I had to get to my warbler walk. We had so many birds, including 17 different kinds of warblers, that I pretty much stopped thinking about adorable baby geese. But as I started out of the parking lot, I was suddenly filled with anticipation, looking forward to getting more shots of the adorable little guys.

As I approached the area where I’d first seen the geese, I saw the adults in the middle of the road, with the goslings milling close to them. The parents were looking down, and I didn’t want to risk startling them, so I pulled over well before I got to them. But even from that distance, the parents started walking off the road, their babies sticking close. Well, all but two babies. Apparently the parents had led the young birds across a bit earlier, and someone ran them down—two babies were dead in the road. I think the parents must have returned to them, not ready to accept the finality of this horrible loss. 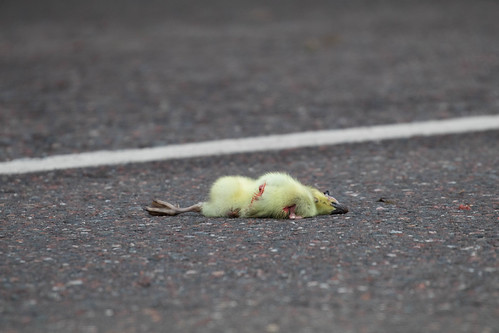 The speed limit on Lake Avenue all along Park Point is 30 miles per hour. With all the vulnerable wildlife on what is one of the most important stretches of any migration pathway on the continent, I’d prefer the speed limit to be no more than 25. But most of the cars that are out whenever I happen to be there are going faster than I am. I can’t imagine how anyone could have approached a goose family—the babies stick close to their parents—without noticing them on the road. But I also can’t imagine anyone killing baby geese intentionally.

I took my first ornithology class at the Kellogg Biological Station, about 65 miles from our apartment in East Lansing, Michigan, in 1975. On one of our drives on a very foggy morning, birds were everywhere. Russ drove very slow so he wouldn’t kill any of them. The distress of hitting a bird would have been worse for us—to say nothing of for the bird—than missing 15 minutes of even the greatest class.

Memories of that foggy morning and of several incidents in Duluth when people hit lots of grounded warblers or owls near roadsides inspired me to include in my book 101 Ways to Help Birds Number 60: “Drive at the slowest speed that is safe, courteous, and convenient.” Driving too slow in traffic is not safe or courteous, and if you’re late for an engagement, it’s not convenient. But slowing down saves energy, human lives, and wildlife. I explained this and gave statistics about the magnitude of the problem in the book. All the text for this "way" is available for free online. But today when I came upon those tragic little baby geese, hardly out in the big world at all before someone driving too fast mowed them down, I wasn’t thinking in terms of the polite words in my book. Dammit, people—slow down! 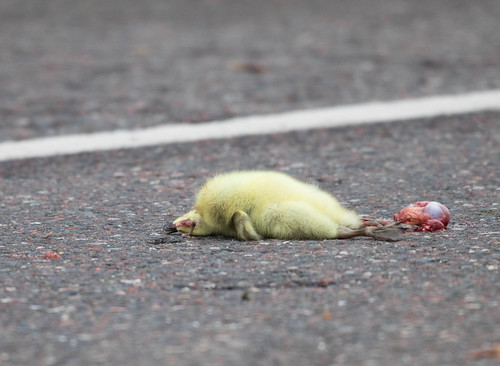