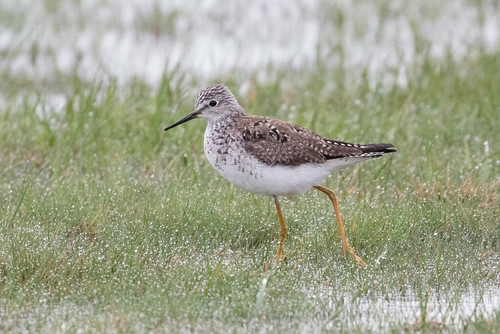 I had a feeling today would be good, even as I left home in a steady drizzle at 6:15. The rain was supposed to stop by 8, but it decided to give us a break and quit early. By the time I made it to Park Point at 6:45, it was just dark and murky.

We found 17 species of warblers in the pine trees near the parking lot, and they were there throughout the four hours I stuck around. Most were Palms and Yellow-rumps, and the light was so dull that the colors even on older male redstarts and Chestnut-sideds seemed pretty drab. 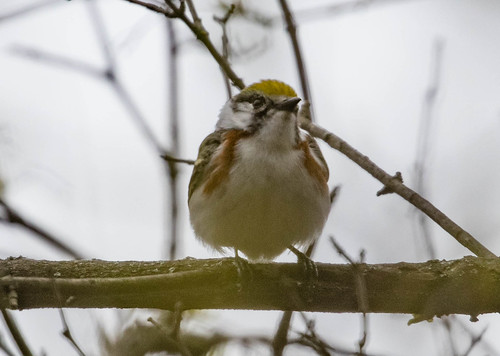 Once in a while one would alight in the perfect position to show some eye-popping color, but just momentarily. We tried moving to the dunes and onto the airport to get them in better light, or at least not backlit, but all the warblers seemed concentrated in those pine trees. When we scanned for them, we also saw amazing clouds of insects—cool for us to see, but even cooler for the birds to feed on. Even the Chipping Sparrows were flitting about pigging out on them.

Overhead, swallows were flying every which way. In the bad light, they were tricky to identify. Most were Tree Swallows, but there were quite a few Barn Swallows, and most of us managed to pick out at least some Cliff, Northern Rough-winged, and Bank Swallows among them, and early on I picked out a single Purple Martin.

The ball fields were hopping with birds—about three hundred Ring-billed Gulls with three Herring Gulls seemed to provide the nucleus—a clear sign to any birds flying over that all was clear. During our time there most of the people in our group had good looks at quite a few Dunlins, a Short-billed Dowitcher, and a Black-bellied Plover. 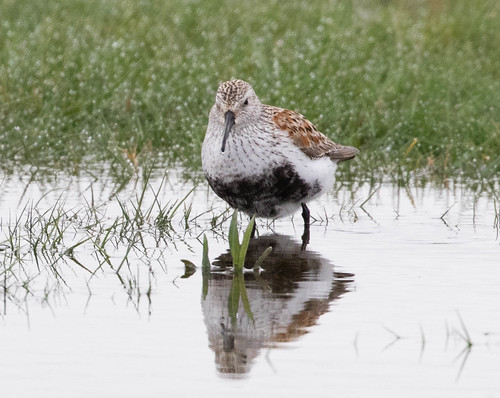 Some people spotted a Ruddy Turnstone with the Dunlins on the beach, and some of us saw one with Dunlins on the ball fields at the very end. Those of us who stuck around long after I first started saying I had to get home were rewarded with two American White Pelicans, a Whimbrel, and a Marbled Godwit flying over, and a Caspian Tern who sat among the gulls trying to blend in. After we left, John Richardson reported even more cool birds on the ball field, including a Lesser Black-backed Gull.

Spring migration is such an ephemeral phenomenon that people can’t help but panic when there’s a great day—will this be the last one? But on May 18, of course it isn’t. So many Yellow-rumps and Palms among the warblers means were still at the start of the peak—nowhere near the top of it yet. One lone Eastern Kingbird hunkered down in a small tree near the recreation building, spotting by Tim Larson alone, was a reminder that we have a lot more flycatchers due to arrive, along with a host of other birds. Birding next week will be intense! And after the migrants have all passed through, we’ll still be able to see 15 or so warblers a day, on territory, for weeks longer. This really is the most wonderful time of the year.