Fun walk at the College of St. Scholastica

This morning I provided color commentary on a little walk around campus at Duluth's College of St. Scholastica. Migration must not be quite over—we didn't hear a single American Redstart!

We started with a cooperative little Chipping Sparrow before my brain was quite in gear, so no pictures of him. Perhaps the least cooperative birds were the Cedar Waxwings that only two or three of us saw or heard before they lit out for the territory.

But a nice little Red-eyed Vireo gave us a bit of a show. His eye didn't look quite so red through my binoculars as they did through the camera.

This adult female flicker flew past and stayed on this branch for a little while. We know she's an adult female because she doesn't have the "mustache" mark.

A Black-throated Green Warbler sang and gave a few people (including me, but not my camera) nice but very brief looks. Same with one of the Ovenbirds that were singing—not a single photo op.

A Red-breasted Nuthatch was calling quite a distance away so I played one recording and he flew in to inspect us all quite closely.

A little Common Yellowthroat sang away, but was singularly uncooperative for photos, so I barely got any. 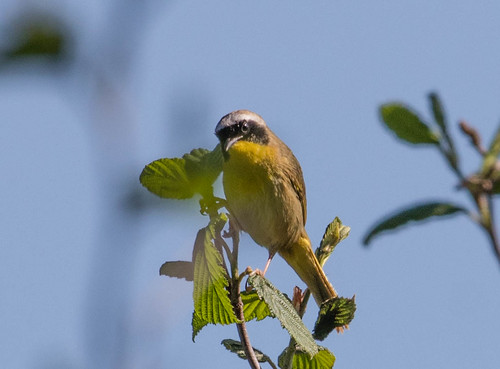 But if the yellowthroat was uncooperative, I'm not sure what word would apply to the extreme uncooperativeness of this Wilson's Warbler.

We ended up as we began with a Song Sparrow singing away. We assume the bird feeding on the ground nearby was his mate.

Our species count was fairly low, but we had quality experiences with a few birds and in an hour and a half saw 26 altogether for a lovely walk with wonderful company.