Where are the Tree Swallows?

I just got an email from one of my friends, Jan Keough, who lives on a lake north of Duluth. Here it is, the last week of June, and she has not had a single Tree Swallow this year. She’d cleaned out her three swallow nest boxes to be ready. Last year one of the boxes attracted squirrels, which chewed up the entrance hole, but she bought a metal ring—what’s called a nest hole restrictor—to exclude birds and mammals larger than Tree Swallows from using the box. She was concerned that that might have discouraged swallows from using what had been her most reliable box, or that tiny bits of debris from the squirrel nest might have repelled the swallows, though she noted that she hadn’t seen any swallows swooping around on land or over the lake this year.

As people on my Spring Warbler Walks can attest, this spring was a pretty cool, especially in the central states but also up here. This seemed to delay migration for a great many birds. We were still wearing winter scarves and gloves at the very end of May.


These temperatures, though not much below normal on average, did keep flying insects at bay, and those flying insects are what fuel Tree Swallow migration, sustain nesting adults, provide the basic building blocks to produce eggs, and keep baby Tree Swallows alive and thriving. I wonder if many swallows didn’t stay a bit further south this season?

We did see a few Tree Swallows on those warbler walks. On May 18 we counted at least 100 swarming in a large migratory flock with other swallow species at Park Point. One pair seemed to be interested in nesting at the Western Waterfront Trail, but we didn’t see them at all on our last field trip there, so I’m not sure they stuck around.

My dog Pip and I came upon a small group a mile or two further down the Western Waterfront Trail on May fifth. One pair who stayed very close to a nest box seemed almost certainly to be nesting—they don’t start incubating eggs until they have a full clutch, but this pair stuck very close to the nest box, giving me splendid opportunities for photos of both of them.

Temperatures along the river in West Duluth are often milder than those near the North Shore, so it’s easy to imagine that swallows may have been gravitating to warmer spots.

I don’t think the situation is dire. I looked on the U.S. Geological Survey’s Breeding Bird Survey webpage, and the graphs for Tree Swallow population trends in Wisconsin and Minnesota don’t show any declines. Their numbers in Wisconsin swing crazily up and down from year to year, but the overall trend looks steady, their numbers fairly high. 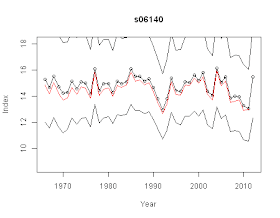 In Minnesota, the overall numbers are a bit lower. Here we see less variation from year to year, but the overall population seems to be trending up. 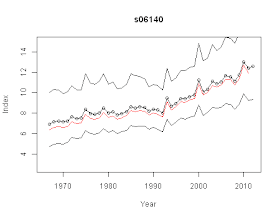 It’s possible swallows rejected Jan's one nest box because of the metal ring around the entrance hole, but they didn’t use her other boxes either. Many songbirds have more of a sense of smell than people once believed, but I know of no evidence whatsoever that debris at the bottom would deter Tree Swallows from nesting. Indeed, I know people who never clean out their nest boxes and still get birds using them, including swallows. So I’m hoping this is just a one-year aberration.

If other listeners are seeing unusual numbers of swallows or other birds this year, high or low, please let me know. And Jan will let me know if any Tree Swallows show up either for late nesting or in migratory flocks as they start gathering in July.

It’s sad to not see any swallows in a given year, but it’s even sadder when they do show up and then you find adults or nestlings dead in the nest boxes. That’s not much consolation for Jan, but we at least can hope for better next year.