On September 28, Jim Lind reported a Smith’s Longspur in Two Harbors, in the grassy area near the historical trains, hanging out with a small flock of Lapland Longspurs. Smith’s Longspur is considered a regular species in Minnesota, because it’s reported virtually every year by at least a few birders, but it can only be reasonably expected at all in mid-October in grasslands in the western part of the state, especially at Rothsay Wildlife Management Area in Wilkin County or the Russell Sewage Ponds in Lyon County. It’s been seen more sporadically during spring and fall in Duluth and along the North Shore.

I’ve only seen Smith’s Longspur once before, in Arkansas in 2006, when I was spending a month there with my friend Paula Lozano during the Ivory-billed Woodpecker craze. We knew that Smith’s Longspur was a regular winter resident at the Stuttgart Municipal Airport, so we took a little drive there. It took two tries to find it, but I couldn’t believe how friendly the airport staff was. We went into the office, they took one look at our binoculars, and told us where to go to look for the bird. One guy mentioned that we should get off the runway if we saw any airplanes. I can’t think of any advice that holds up more universally than that.

Other than that useful tip and a lifer, I’ve not had anything to show for my visit to the Stuttgart Airport except an extremely pixilated distant photo of a distant Smith’s Longspur. I badly wanted to add one to my Minnesota list and maybe even get a better picture. So last weekend Russ and I drove up to Two Harbors, but although we got great looks at all the birds in two small flocks of Lapland Longspurs, we could not find the Smith’s.

Then on October 3, Clinton Nienhaus reported a Smith’s Longspur at the old Stella Jones Pier in west Duluth. Like the one reported in Two Harbors, this one was hanging out with Lapland Longspurs. According to The Sibley Guide to Birds, Smith’s Longspur “does not mix with other longspurs,” but the Sibley guide weighs about 3 pounds—much too big for almost any birder to lug around, so it makes sense that a 1-ounce bird wouldn’t be consulting it for lifestyle guidance.

I headed out there as soon as I got the word, but I’d never before gone to the old Stella Jones pier, which now is nothing but an abandoned, fallow field with no signs to identify it, and I didn't see any birders anywhere. I found myself bewildered, not knowing where to go, and gave up. I got a message on Friday that Kim Eckert had seen it at the same place that morning. Russ happened to be home for lunch, so I showed him where it was supposed to be on the map, and he knew exactly where that was, because he’s collected water samples in the slips there. So we jumped in the car to try again, bringing my little birding dog Pip along.

There were at least 150 Lapland Longspurs, 45 Horned Larks, and 2 American Pipits hanging around in the large area, so searching for one buffy outlier was a little tricky, made even more so by one unusually buffy Lapland Longspur. 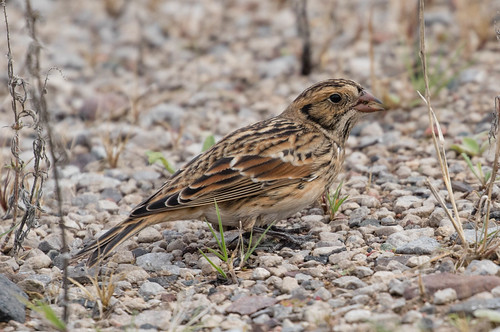 I got two excellent but quick looks at the Smith’s. The first time it flew just as I was grabbing my camera; the second time I kept it in view through my binoculars in flight and got a great look at but no photos of the wider amount of white edging the tail compared to the other birds—Smith's Longspur has two white outer tail feathers while the Lapland Longspur has only one.

I'm sure Pip has been with me at least once before when I've seen Lapland Longspurs, but I somehow neglected to add that fairly common species to her life list until now. Her total is now up to 270! She was happy when I told her that, in the same way that she's happy when I tell her the Cubs won, or I say, “Look, Pip! It's stopped raining!” or “Look, Pip! It's raining!” I took a photo of her out there. Unfortunately, I only brought my long lens, so you can’t see the little birds flying about to explain why I’m now calling her my very own Pippy Longspur. 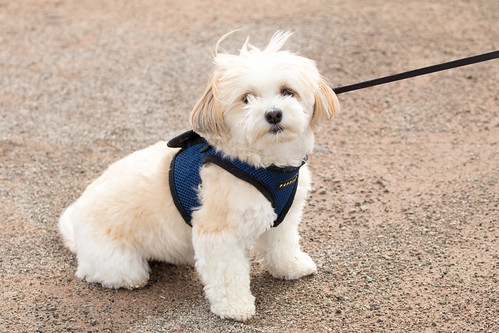 I wrote about Paula and my trip to the Stuttgart Airport to see Smith's Longspur in 2006, going into some depth about the extraordinary mating habits of this unique species. You can read the transcript and/or listen to the program here.
Laura Erickson at 6:56 PM
Share