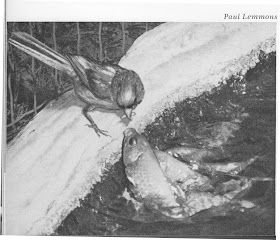 Last week on Facebook, a lot of my friends were sharing a short video, on a National Geographic webpage, of a cardinal in Illinois feeding goldfish in a backyard pond. The video had been posted on YouTube in 2010, taken during summer, when adult cardinals are feeding their own young and when some individuals molt all their head feathers—this male cardinal’s head was completely bald.