Book Review: Birds in a Cage 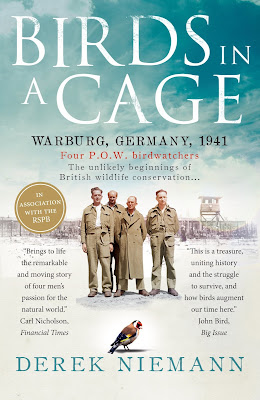 Five years ago, a truly exceptional nonfiction book was published in the UK about four British prisoners of war during World War II, and how their passion for birds helped them survive the horrifying conditions of the POW camps; after the war, they became important forces behind British bird conservation. Somehow, I managed to not even hear about Derek Niemann’s wonderful work, Birds in a Cage, until a few months ago, when one of my friends, Ian Paulsen, recommended it.

The book opens with a very brief overview and then introduces what Niemann calls “the cast.” Through the rest of the book, the author pretty much follows the chronology of the war, but where different men are in different locations, he goes back and forth between them. He researched the book using letters home and journals kept by the four men, so his available information provides more depth for some than others at various times. Based on the reviews on Amazon, some readers had difficulty following the book because of this. When I started out, I stuck a bookmark in that introductory section so I could go back and forth for a quick reminder of which character was which, but as it turned out, that wasn’t necessary—I quickly picked up on each one as an individual.

I knew I’d enjoy the book with the very first sentence of the first chapter:


On the day the Second World War broke out, Cheshire naturalist AW Boyd had one eye on the country diary column he was writing for the Manchester Guardian; the other he had lost on the battlefields of Gallipoli in 1915.


I cannot help thinking that if only Hitler had been an ornithologist, he would have put off the war until the autumn bird migration was over. I wonder if any of the friendly Germans whom we met last year at the International Ornithological Congress at Rouen feel as I do. That he should force us to waste the last week of August and the first fortnight of September in a uniform that we hoped we had discarded for good is really the final outrage.

Boyd is not one of the four characters in Birds in a Cage; not only was he missing an eye but he was also in his mid-fifties when he wrote that column as the war was breaking out. By the end of the war, his ironic comment about missing the peak of the 1939 fall migration being the “final outrage” wouldn’t have seemed so humorous, especially to the four main characters of the book.

The very British ironic detachment of the opening didn’t close off author Derek Niemann from writing vividly about the harrowing conditions of the POW camps. We get plenty of details about the lice, fleas, freezing cold, malnourishment and chronic ill health of the camps, conditions so horrifying that sometimes men made a suicidal run for the barbed wire fences and razor wire in full view of the guards simply to end their own misery. One of the main characters was already suffering from dysentery, cholera, and stomach ulcers before he was even taken prisoner; in the prison camp, he became so ill that he was finally repatriated to Scotland in 1944. His death, decades later of a kidney infection, was caused by those wartime illnesses exacerbated by lack of treatment and conditions during prison life.

Even small children recognize the powerful metaphor equating birds with freedom. Whether the main characters of Birds in a Cage were marching in a frozen landscape or trapped within the barbed wire cage of a prisoner of war camp, their appreciation of the freedom of birds was far more steeped in reality than metaphor. They noticed and watched migrating rooks and jackdaws that dropped down from the skies to eat some of the prisoners’ own sewage, spread as manure on surrounding fields. They paid close attention to the little songbirds flitting in and out of the barbed wire—some of these birds became subjects of systematic studies.

Most of their observations didn’t amount to anything much after the war—indeed, John Barrett kept meticulous records in a journal—his mountains of raw data could have formed the basis of a monograph on the Eurasian Tree Sparrow, but facing an arduous long march as a refugee, he conscientiously mailed his journals to himself and the package never arrived. George Waterston’s study of the Wryneck was never published in any form either. Peter Conder’s notes on the European Goldfinch formed the nucleus of a scientific paper on the species, and most noteworthy of all, Edward Buxton’s work on the Common Redstart formed the basis for The Redstart, a major work on the subject. But whether or not the research each of them did during their imprisonment amounted to anything in the greater ornithological world, their work gave each of them a reason to look beyond the hell surrounding them. Indeed, Waterston and Buxton enlisted some of the other prisoners of war to help make observations, providing a beautiful if tiny diversion from the hell surrounding those men, too.

After the war, they each devoted their lives to something connected to birds. After writing his book about the Redstart, Buxton lived a quiet life as a respected naturalist. Barrett never again traveled from his beloved Pembrokeshire except to visit his children, yet he became the primary author of a universally praised book, The Collins Guide to the Seashore, and a noted bird teacher. Waterston became one of Scotland’s leader of conservation and came up with Operation Osprey, protecting these spectacular raptors not by keeping their whereabouts secret but by enlisting public aid by publicizing the birds. Conder became director of the RSPB, bringing the organization to a new level in professional conservation.

Even with the ability to focus on something far from the horrifying conditions of the prisoner of war camps, none of the four men in Birds in a Cage came through unscathed, in terms of both physical and psychic damage. Their story was one worth telling, and Derek Niemann did a wonderful job. I heartily recommend Birds in a Cage whether you’re interested in history, human resilience, or the importance of nature in protecting and restoring the human spirit.