On Tuesday, I talked a bit about the many northern owls turning up in the Duluth area recently. Tragically, not all the owl sightings have been happy. I’ve heard a few accounts of Snowy Owls being struck by cars, and of a Boreal Owl found dead. But perhaps the saddest story was sent to me by David Bartlam, who came upon a dead Great Horned Owl in Proctor along I-35. The poor bird must have been flying with its legs dangling, as owls so often do, and one toe got snagged in a chain link fence. David wrote that it was extremely cold that day, which would certainly have hastened the owl’s death. He returned four hours later, but the owl’s carcass had been removed. He sent the photo above.

Good fences may make good neighbors in Robert Frost’s world, but not in the world of owls. Flying in the dark as they do, they know how to recognize and avoid dangerous obstructions in their airspace such as trees and buildings, and know from experience that just about everything at fence height—grasses, weeds, and the twigs in the upper parts of shrubs—is invariably yielding. The first time they hit a fence is usually the last. In December 2010, I got a heartbreaking message from Mary-Ellen Holmes, on her farm south of Superior. She’d found a Great Horned Owl electrocuted and frozen solid on her electric fence. It was stunningly beautiful and so lifelike except for being dead. She sent the poor thing to a nature center for education. 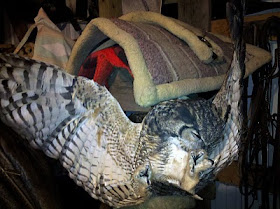 When I went to the visitor center at the Wheeler National Wildlife Refuge in Alabama, someone had just delivered a Barn Owl that had collided with a barbed wire fence. It was impossible to safely extricate the bird from some of the wires, so the person who rescued it cut the wires in place. Refuge personnel were going to send the bird to rehab, but I’m not sure it was going to make it. It’s important for our own peace of mind as human beings to do what we can to help our fellow creatures on this little planet, even when it may well be futile, if we want to preserve our own humanity. 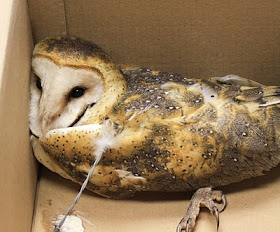 Fortunately, not all owl-fence collisions are fatal, but when an owl is entangled, time is of the essence. In 2010, the Duluth News-Tribune reported that Kathy Paquette of West Duluth had found a Northern Saw-whet Owl ensnared in the mesh fence surrounding her garden. Fortunately, she found it while it was still doing well, untangled it, and brought it to an area rehabber. This bird was held for observation overnight, and released at Paquette’s place the next day. The paper quoted her, “Oh, my god,” she said. “That was a dream come true for me. I love animals. I like to save animals… I was in tears, I was so happy I found him before he was dead,” she said. 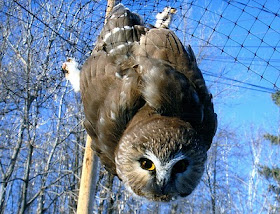 I was with a birding group in Arizona back in the 1990s when we came upon a Barn Owl whose leg had been snagged in a barb on a fence. We couldn’t tell how long it had been there, but it was early in the morning on a day that ended up being very hot. It took both Kim Eckert and I, who had both handled lots of raptors, to free the poor bird. It had a couple of serious gash wounds and was going into shock. Luckily we were in time, and the rehabbers were able to release it where we’d found it several days later. 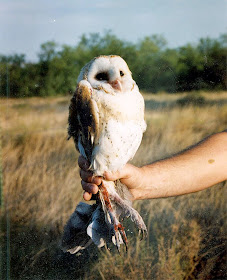 Collisions with fences are the number one cause of death for female prairie grouse, and certainly a significant cause of death for owls. When fences are providing an important function, they obviously need to be kept in place, but when that function is over, it’s time to take them down. David Bartlam wrote, “I can't tell you how many times I have been with a dog that is running through the woods and crashes into an obscured fence, so I am sure it takes its toll on other wild creatures. The problem is the longevity of steel fences.” My own golden retriever, Bunter, got badly injured on an old barbed wire fence that had been discarded and rolled down a ravine long before. Removing and properly disposing of unnecessary fencing is work, but it’s also the duty of responsible landowners. Even in Robert Frost’s universe, it’s only good fences that make good neighbors.