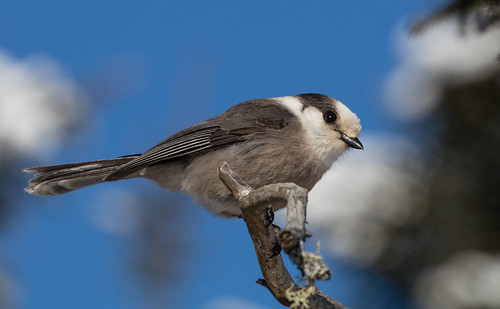 For more than thirty years, since I started producing For the Birds, I’ve wanted to make it more genuinely interactive for listeners. How I wish I had an affordable way to record phone calls in my home studio! I don’t get any financial support for producing the program or podcast, and can’t get to the KUMD studio too often to use their equipment. I’d love to take questions from listeners, hearing their voices rather than just reading their letters on the air. I’d also love to hear about people’s favorite birds. Birds touch our lives in so many different ways, and there are so many different kinds of birds, that hearing what birds are the favorites of different people can broaden our own appreciation.

Some day I’ll figure out how to record back-and-forth conversations with listeners, but for now, I can at least accept sound files emailed to me at favoritebird@lauraerickson.com, or voicemail messages on Lisa Johnson's KUMD number's any day after 2 pm Central Time: 218-726-6755. Give your first name, and say what your favorite bird is and why. Recordings should run 15-30 seconds or so.

And speaking of Lisa Johnson:


Hey, Laura, It’s Lisa. I think my favorite bird is the Gray Jay. They’re friendly, they’re fun, they come flying in really low and slow and they get right up close so you can get great photos, and they really seem to appreciate a good premium dog food.

Gray Jays, which look like chickadees on steroids and fly in on silent wings like the ghosts of our northern bogs, are one of my own most treasured birds. I’ve felt singularly bereft on the rare occasions that I’ve not seen one during a visit to the Sax-Zim Bog. As Lisa notes, Gray Jays depend in part on animal-based foods, and quality dog food can be a healthy addition to their diet. Peanuts and peanut butter are other favorites. 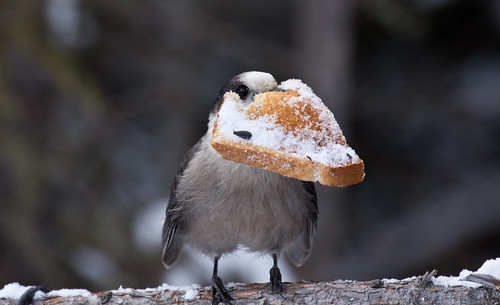 Naturalists at Algonquin Provincial Park have learned that those Gray Jays that approach and take food from people seem to survive longer and raise young more successfully than Gray Jays that avoid us. The researchers don’t believe this is because the jays actually need the particular foods we offer or that anything we give them is higher quality than what they can get in the wild—the researchers think it’s simply because those Gray Jays that check us out and know how to capitalize on the food we carry about, whether they’re living up to their nickname “camp robbers” or taking handouts, seem more curious and adaptable than the jays that don’t. Curiosity and adaptability are important qualities for any omnivore, especially one that spends most of the year in a hostile, frigid environment. 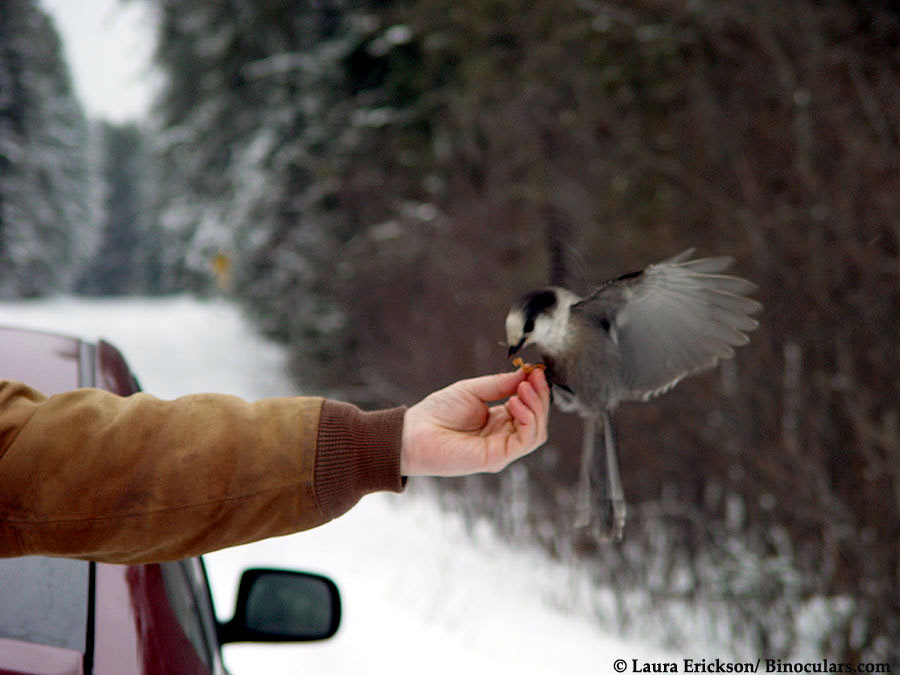 Gray Jays are nesting right now, even as winter will be hanging on for several weeks more. They can nest so very early because they’ve been hoarding food—mostly bits of fruit and meat, since autumn. They coat each wad of food with saliva, and then tuck it into a wedge of tree bark or other hidden place.

Unfortunately, winter thaws and warm spells, which are increasingly common with climate change, cause a horrifying phenomenon for them that the Algonquin park researchers call “hoard rot.” Those of us who have had to throw food out after a power outage should be able to sympathize.

Careful long-term studies at the park have shown that the Gray Jay population there has declined by 50 percent since the 1970s, in large part because the jay’s reproductive rate drops dramatically in warmer winters. In particular, the jays have completely disappeared from areas with lots of maples, but are holding out more strongly where black spruce is prevalent. Scientists think that black spruce bark provides more protection from rot than other hoarding substrates. Unfortunately, black spruce is also vulnerable to warming trends. The Living Bird, the Cornell Lab of Ornithology’s quarterly magazine, has a wonderful article about Gray Jays in the current issue, titled “Spoiler Alert: Can Gray Jays Survive Warmer Winters?”

Gray Jays are also in the news right now because the American Ornithological Society is considering changing their name back to Canada Jay, the first official name given to what ornithologists call the “nominate subspecies.” Canadians of course approve of this for their beloved corvid. Some argue that because there’s a Blue Jay, Green Jay, and Brown Jay, the name Gray Jay makes sense, but then again, there’s also a Mexican Jay, a Yucatan Jay, both California and Florida Scrub-Jays, and other geographic names. Canada Jay is the name in my trusty old Audubon Land Bird Guide and the life history by Arthur Cleveland Bent, too.

I don’t really have a preference between Gray and Canada Jay—I’d prefer giving primacy to the name used by Cree First Nations people, wisakedjak, which means the trickster spirit of the forest and is where the nickname "Whiskey Jack" comes from. By any name, Lisa’s favorite bird is a splendid one deserving of our respect, concern, and protection.

If you have a favorite bird you’d like to share with our listeners, let me know your first name, what the bird is, and why. You can either attach a 15-30 second or so sound recording to an email sent to favoritebird@lauraerickson.com or as a voicemail message, ANY DAY AFTER 2 PM CENTRAL TIME at 218-726-6755, Lisa Johnson’s number at KUMD. 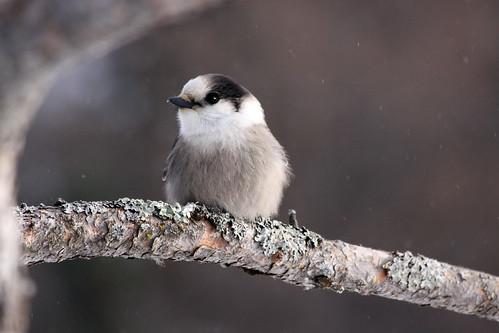