When my son Joey was a baby, Russ attended a meeting of the American Chemical Society in Las Vegas. It’s not exactly a birding Mecca, but he took his vacation time around the meeting, and Joey and I tagged along. We drove to Las Vegas, and after the meeting went to Hoover Dam and the Grand Canyon for Russ, and then to several birding spots in southeastern Arizona for me. Joey, being 5 ½ months old, was given absolutely no say in the planning.

I was afraid that the four days in Las Vegas would be boring, but just in case there could be any good birding around there, I posted on the BirdChat listserv, asking if anyone could suggest good birding spots in the Las Vegas area. One wonderful woman, who happens to be one of the top birders in the world, Marian Cressman, not only gave me suggestions; she also insisted on spending two days with me, taking me to the best places, even after I told her I’d be bringing along Joey—she said birding alone in Las Vegas is dangerous for women. A birder attending the chemical society meeting hired her to take him out one morning—she told him he’d be birding with me and a baby, too.

On those two days, I added 10 lifers. On my last morning in Las Vegas, while Russ was at his final meeting sessions and I was on my own, I took Joey to Sunset Park, a lovely spot near the airport that Marian had introduced me to. I’d already discovered the hard way how tricky it is to bird with a baby in a Snugli front carrier without clunking my binoculars on his head. When I say “the hard way,” I mean Joey learned it the hard way—it’s not easy being the firstborn child of a birder. We also had a backpack for him, but I couldn't manage getting that on and off without help. Joey and I had Sunset Park to ourselves, so I brought our portable baby seat out of the car and set him up on a picnic table. He could look around more easily and not get hit on the head while I birded close by.

Joey was an easy-going baby, curious and happy just looking around at the world. I liked to pretend that he was a birder just like Mommy, but he was really too young to take in birds that could only be seen with binoculars. But that early April morning in Sunset Park, he very decidedly started watching and listening to birds, and gurgling with delight. He didn’t notice the Crissal Thrasher that took my breath away, or the sweet little wurp! calls of Phainopeplas, or the rosy Anna’s Hummingbirds or tiny Ladder-backed Woodpeckers. The roadrunner racing by didn’t catch his eye, either.

No—my baby was enchanted with a flock of Great-tailed Grackles who strutted and called, doing their exuberant spring courtship routines right in front of him. 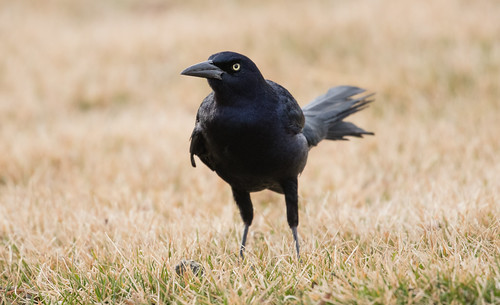 Their incessant calls—shrill whistles and squeaks, pig-like grunts, clicks, rattles, and piercing squeals—filled Joey with glee. He could easily see them on the grass and in a couple of nearby trees, where their iridescent feathers glowed in the morning sun. A few times, one or two males alighted briefly on the picnic table less than a foot away from him, their sharp, pale eyes scrutinizing him as he squealed with delight. 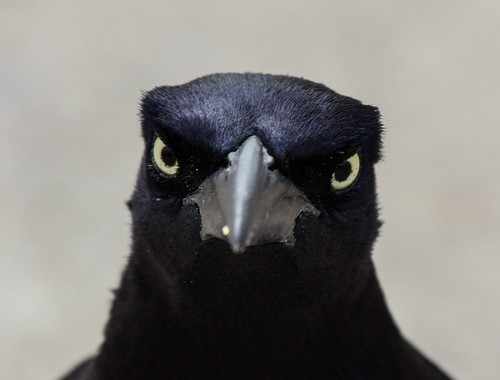 They cocked their heads, and some of the grackles on the ground looked up at him, too—his baby laughter could have passed for some of their own bizarre calls. The shiny black males, a full 18 inches long, didn’t seem much smaller than Joey. I was pretty sure they wouldn’t try to touch him, but even though at this point in my life, I’d never seen Alfred Hitchcock’s movie The Birds, I kept careful watch.

The females, rich brown and weighing only half as much as the males, seemed like a different species. I could see Joey looking back and forth between males and females, but doubt if his brain focused on the ornithological technicalities—they were just plain fun to see.

Many people consider Great-tailed Grackles pests for their abundance, the quantity of grain and fruit they devour, and the decibel level of their calls. I’d never been in the Southwest before this trip, and had been hoping that morning to get a more solid take on common birds before we headed on to Arizona. The grackles weren’t a new species for me—I’d seen them in Texas. They were abundant, and being on full acquisitive mode in this new part of the country, I had taken little interest in them.

But now I was looking at and hearing them through brand new eyes and ears. We were in the park for an hour and a half, and the grackles were so loud and active that Joey never once lost interest. How could I ignore anything that so captivated my baby, keeping him enchanted for as long as Sesame Street and Mr. Rogers Neighborhood combined? I did check out some of the other birds that appeared, but spent only seconds on them. My attention kept returning to these spectacular birds that could so thoroughly entertain such a little baby. 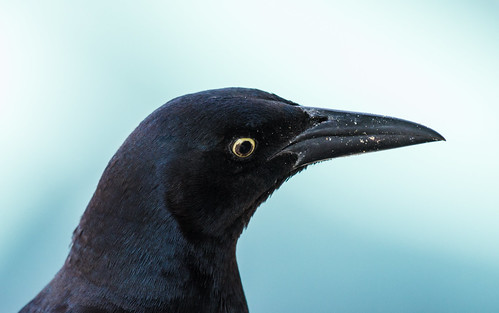 You can see all of "Laura's Best Bird EVER!" posts linked here.
Laura Erickson at 3:40 PM
Share