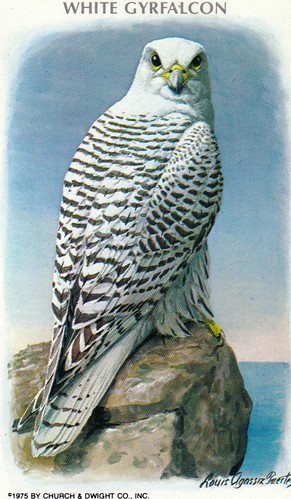 In recent weeks, I’ve been asking listeners and blog readers to call or send a sound recording telling us what their favorite bird is and why. A birder named Erik sent me a voice memo from his phone:


Hi. This is Erik, and my favorite bird is the Gyrfalcon, because they are a stunning bird of prey with beautiful field marks, they are powerful, and they enjoy the cold conditions outside.

In the winters when a Gyrfalcon appears in the Duluth-Superior Harbor area, birders flock here from all around. Word gets out, but that can occasionally be problematic, because the Gyrfalcon’s desirability extends beyond the birding community into the world of falconry.

This largest, most powerful of all falcons—well, not counting the Millennium Falcon—is also one of the most sought-after birds by wealthy falconers throughout the world. It’s not particularly rare, on a global scale, but ranges the furthest north of all daytime raptors—the northernmost parts of Hudson Bay are as far south as Gyrfalcons breed. The Snowy Owl is the only avian predator that breeds even further north.

Northern Wisconsin and Minnesota fall within the Gyrfalcon’s regularly occurring winter range, but only a very few of them wander this far south—most of the North American population stays in Alaska and northern Canada year-round. The Gyrfalcon not only endures but also thrives in the harshest conditions the frozen north can mete out. The most likely place we see them in either Minnesota or Wisconsin is in the Duluth-Superior Harbor. I don’t know of any sightings this winter, but in several recent years one has spent the entire season in the harbor.

The Gyrfalcon’s name causes a lot of confusion. Because the species is circumpolar, it had an English name long before most American birds—the word gyrfalcon’s first known English use, according to Merriam-Webster, was in the 14th century, and according to Cade’s Falcons of the World, it was well known in northern Europe at least a century earlier. Cade wrote that this was the falcon which:

The gyr of the name is not related to the gyr in such words as gyrate and gyroscope, which come from Latin for circular or rounded. The gyr in Gyrfalcon comes from Old Norse via Old French for geirr, referring to a spear. I’ve heard birders refer to the bird as a GIRE falcon and JYRE falcon, but unlike PIE-leated and PILL-leated, Gyrfalcon has only one correct pronunciation.

Thirty-eight years ago today, on March 23, 1980, I saw my lifer Gyrfalcon in Columbia County, Wisconsin—the only lifer I’ve ever seen that left me feeling embarrassed and unsettled rather than joyful. I was birding with my good friend Frank Freese, and we pulled over in the prairie-farm-field area near Madison Audubon's Goose Pond to look at Lapland Longspurs, Snow Buntings, and Horned Larks.

Being in my 20s, and so at my most spry and acquisitive, I’d jumped out of the car with my scope before Frank even had his hat on, and suddenly there it was—a stunningly gorgeous, huge white falcon cruising by at close range, and at high speed. All I could say was “FrankFrankFrankFrank!” but by the time he made it out of the car, the bird had vanished into the horizon. One of the cardinal rules of birding is that we must try to get everyone on every good bird. I felt horrible that I’d seen something so amazing and rare while Frank missed it. It wouldn’t have been a lifer for him—he’d even birded on Attu as well as other far northern places—but he’d never seen one in Wisconsin, and never seen a white one.

Gyrfalcons come in three colors, white, gray, and dark gray-brown, with the white form being the rarest. That 1980 bird was the only white Gyrfalcon I’ve ever seen to this day. I never reported it to eBird—it still makes me feel uneasy, as if I’d somehow cheated to see it when the only person with me missed it. Several times since I’ve lived in Duluth, one or even two different gray Gyrfalcons have spent weeks or even months in the harbor area, so I have what feel like more legitimate sightings for both states now, but still feel troubled about that first one.


Please share YOUR favorite bird with us. We want your first name, the bird, and why you like it so much. Email a 15-30 second recording to favoritebird@lauraerickson.com, or record your message on Lisa Johnson’s work voicemail after 2 pm—that number is 218-726-6755. This information is also at the top of the sidebar on my blog, at www.lauraerickson.com. My blog provides transcripts, links, photos, and sometimes more information than I can squeeze into a 5 minute program/podcast. Check it out!