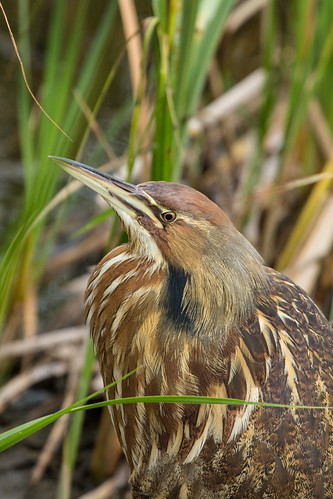 Sometimes we have encounters with birds that seem utterly wonderful and amazing, even if the bird we encountered isn’t our favorite bird of all. Last week I received a phone call from a listener who didn’t identify herself telling about her most memorable encounters:


I’m calling about my best bird ever. I saw this bird on April 27, 1985, and it was memorable in that first I heard him sounding like an old-fashioned washing machine on its last legs. I had no idea what I might be listening to but stayed around that swampy area and finally caught sight of him with his head pointed straight up, and he kept croaking away. That was the first sighting of my American Bittern.

And a couple years later I was treated to an unexpected sight when I saw a male American Bittern enthusiastically (according to me) trailing after a female as they walked down our driveway, and I thought that was unusual to be out in the open so, but I think when you come right down to it my favorite bird is the chickadee because he’s always there and gives so much pleasure. Thank you.

I lucked into seeing my very first bittern calling out in the open on a college ornithology field trip. I’d already heard the bizarre call on my Peterson bird record, and our professor got the bird into his spotting scope and told us all what it was, so as wonderful as it was to see the bird making its amazingly cool calls the very first time I saw one, it wasn’t any kind of mystery for me to tease out. And unlike our fortunate caller, I’ve never ever seen a bittern walking around on my driveway. 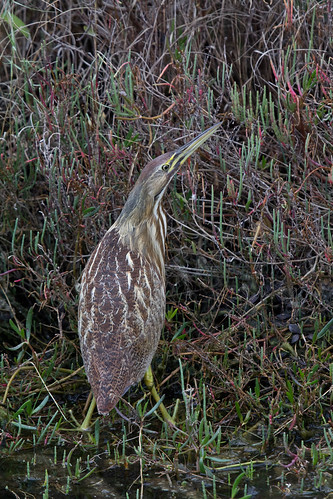 The Medieval Latin word for bittern, butaurus, was constructed from the Middle English name for the Eurasian bittern, botor. In Pliny's Natural History, a comprehensive book, written in Latin, about what was known about the natural world, Pliny the Elder wrote that the derivation of the word was from Bos (ox) and taurus (bull), because the bittern's call resembles the bellowing of a bull.

Here in America, our bittern has several nicknames including “stake-driver,” “thunder-pumper,” “water-belcher,” and “mire-drum,” all to describe the bizarre quality of the call. Of course, the bittern and the Green Heron have also been given another nickname, “shitepoke,” but for an entirely different reason: the *shite* comes from a four-letter vulgarism referring to something that streams out of the birds on takeoff. I don’t know if Pliny the Elder paid attention to that or carefully diverted his eyes to avoid seeing anything so unseemly.

Bitterns are in the heron family, and feed on fish, frogs and tadpoles, snakes, insects, voles, and other aquatic or wetland critters. Their most common insect prey include water striders, giant water bugs, water beetles, water scorpions, grasshoppers, and especially dragonflies—they can capture those in midair. Like other herons, they swallow their prey whole, head-first.

Bitterns stalk their prey in a slow, deliberate kind of way, or just sit patiently waiting for the food to come to them. Their powerful neck muscles give them a fast and furious jab, a supremely effective means of grabbing the quickest swimming critters. Their cryptic coloration, with the vertical streaking along the neck, makes them almost invisible in a cattail marsh. But that coloration doesn’t help much when the birds arrive in spring before snow has melted—I’ve seen them standing with their bill up in the middle of a snow-covered, frozen marsh, standing out beautifully against the white background. My best photos were taken in Texas and Florida in winter, when the birds are usually silent but fairly easily seen from boardwalks in popular birding spots.

It doesn’t surprise me that my unnamed caller didn’t think of the bittern as her favorite bird. Magical as her encounters were, bitterns are here only part of the year, you usually have to work pretty hard to see them, and they’re only found in wetlands where mosquitoes also abound. But magical encounters don’t lose their power and beauty just because the bird isn’t our absolute favorite. Wherever we go birding, from a sewage pond to an enchanted forest, and whenever we go there, there is always the possibility of a magical, or at least wonderfully memorable, encounter with some bird. When you're birding, something wonderful is always right around the corner, and while we wait, we can always count on our dear little chickadees. Our time spent in the natural world nurtures our sense of wonder, the very source of faith, hope, and love. 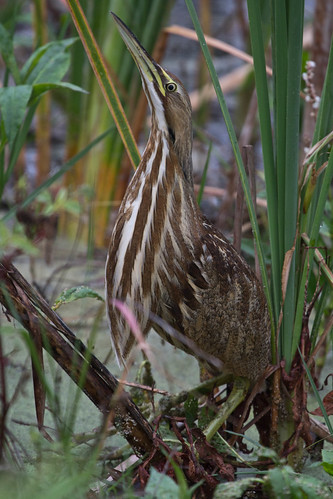