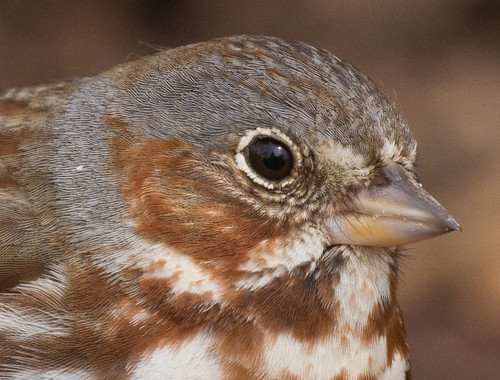 Every year, with rhythmic if not quite clocklike predictably, my Facebook friends complain about the spring weather—there’s still too much snow, ice-out is taking too long, where are all the migrating birds? On the very same days that I read those posts, my Facebook friends post about how the snow is gone, the temps are reaching the 80s, and how they’ve got Carolina Wrens nesting on their porch again. Photos just yesterday ran the gamut from pock-marked snow and ice-covered lakes and a late Snowy Owl to blooming flowers, orioles, and hummingbirds. Of course, that’s because I have Facebook friends from all over. I smile not only at the predictable nature of spring migration but also at the predictable nature of our own reactions to the predictable unpredictability of spring.

It’s hardly news when a robin sings, or a chickadee carries nesting materials, or a White-throated Sparrow arrives in April, but there’s such a feeling of joy when we see it again for the first time each year, as if we harbored a deep-rooted fear that maybe this year no robins would sing, and no chickadees would nest, and White-throated Sparrows would actually disappear. Rachel Carson understood this deeply-rooted need for annual predictability and repetition when she wrote:


There is symbolic as well as actual beauty in the migration of the birds; in the ebb and flow of the tides; responding to sun and moon as they have done for millions of years; in the repose of the folded bud in winter, ready within its sheath for spring. There is something infinitely healing in these repeated refrains of nature, the assurance that night after night, dawn comes, and spring after winter.

Spring to a nature-lover is like Christmas to a Santa-believing child—there’s such intense impatience during the waiting, then such intense magic, and suddenly it’s all over for another year. Up here we’re still a bit in the waiting stages, but when the floodgates open to hummingbirds, orioles, warblers, and Rose-breasted Grosbeaks, we can’t possibly take it all in before things settle back down as migration eases into the breeding season.

My friend Lisa has been impatient for American White Pelicans; a listener named Richard Wright called her to report them arriving in Fond du Lac on April 22. We each have a few things we especially savor. I particularly relish hearing Fox Sparrows and Juncos singing. I’ve only had 3 Fox Sparrows and 30 juncos at most this spring, and very few songs, but to fill the void I’ve pulled out a recording I made in my backyard on April 21, 2011. That’s what I played in the background of today's podcast—just hearing it makes me very happy.

I try to savor each day as it unfolds. I am trying to be a more consistent eBird user. I kept track of every bird when Russ and I were in Florida last week, but I’ve been sloppier about it at home, even though keeping my backyard sightings on eBird can be lovely to look back on. Most of the spring migrant sparrows I love haven’t returned yet, but the number of juncos changes from day to day, from none all winter to a couple last week that I neglected to post on eBird, to 6 on Thursday, 15 on Friday, 30 on Saturday, and 10 on Sunday. On many years my junco numbers peak at a much higher number than just 30, but I don’t know how many are still south of here, so won’t know for at least a week if Saturday was the peak. Trying to stay in the habit of eBirding when my daily lists number less than 20 species is good discipline and practice for when migrants start rushing through. It won’t be long now.