Eastern Towhee's Got a Name 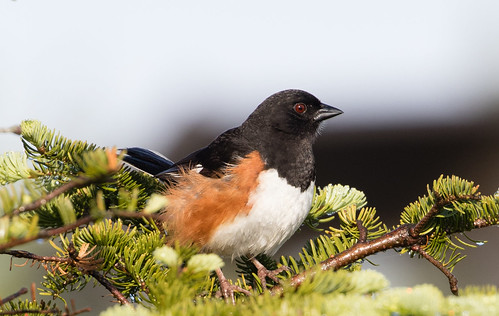 Back sometime in the late 1980s, one morning when my toddler son Tommy had just stopped playing in the sandbox, in flew an Eastern Towhee who landed on the sand, perhaps to pick up some grit, and then jumped atop one of Tommy’s big yellow Tonka trucks and perched a while. That was the first towhee I ever saw in my yard.

My little boy Tommy grew into the only other person in my family who took college level ornithology, and he’s become better at identifying Minnesota bird songs than me, at least since my hearing has gone south. In my own college ornithology classes, I learned the towhee song as “Drink your tea,” which made no sense whatsoever to me. Tom hears it as “Eastern Towhee!” which both fits the rhythm and makes a lot of sense. In my defense, and the defense of everyone who studied towhees before their name change in 1998, “Rufous-sided Towhee” just doesn’t fit the meter.

Towhee’s have always been few and far between here in my established neighborhood, appearing only rarely, and only during migration. There wasn’t a single sighting of them in St. Louis, Lake, or Cook Counties during the Minnesota Breeding Bird Atlas. The open habitat with trees, shrubs, and a nice understory in the area behind our house and along the fence line on the next block seems like a decent place for towhees, but they prefer to live further from so many humans, and Duluth is north of the species’ normal breeding range. While I worked at the Cornell Lab of Ornithology, I used to see and hear them every spring and summer day when I’d walk my dog Photon in the little wooded area outside my apartment complex in Ithaca, but that was the only time in my life I’ve lived so close to where towhees nest.

On Tuesday of this week, my son Tom and I started noticing an Eastern Towhee singing in our yard. The sandbox is long gone, but he was singing in back of both our yard and our neighbor’s. And he was still singing here Wednesday morning. I was reading online reports about warblers in Illinois, so migration was far from over, and I’m sure this little guy was simply taking a breather along his journey. But this is when Tom told me how he hears the song— “Eastern Towhee!”—and it made me inordinately happy to finally have a mnemonic that fits the song the way my ears hear it.

When Russ and I were in the Everglades last month, we came upon a gorgeous Eastern Towhee by one of the campground bathrooms. On the outside of the building was a deep sink with a slowly dripping faucet, and he jumped right in to get a drink and take a quick shower bath. Birds are extremely vulnerable if they lose their focus while bathing, so he was extremely skittish, and I didn’t manage to get a photo, but it was a wonderful moment. Towhees really don’t like coming out in the open, so they’ve given me quite a few photographic challenges over the years. That bathing beauty belonged to the South Florida race with yellow eyes, but Edward Howe Forbush wrote in his Birds of Massachusetts of what he called the Red-eyed Towhee (the kind we see up here), “No other sparrow in the East seems to be so wedded to life in thicket and tangle.”

Eastern Towhees may be secretive, but now, thanks to my son Tom, I know that like chickadees, bobwhite, killdeer, whip-poor-wills, phoebes, and Jim Croce, they got a name, and they’ll carry it with them like their daddies did.
Laura Erickson at 10:05 PM
Share