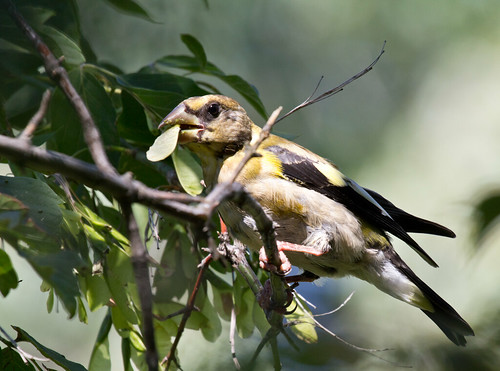 Back in 1981 when we moved into our house on Peabody Street, the very first songbirds I noticed were several Evening Grosbeaks sitting in a box elder tree right next to our house. One of the Evening Grosbeak’s favorite foods is box elder seeds, and our two box elders, and then a third that sprouted up in the middle of our yard, gave us a huge advantage in attracting these beautiful birds during all the years they were common or even abundant in Duluth.

But the moment she saw it, my mother-in-law told me the box elder next to the house should come down as soon as possible—it was a dangerous hazard. Russ told me not to worry—the tree was TOO close to the house to pose a danger, because it would fall gently against it if it fell in the wrong direction. Now, 37 years later, it’s still standing. What has changed is how much more devoted I am to it now than I was then, even as Evening Grosbeaks have disappeared.

Over the years, this tree has provided nesting quarters for a few birds that I’ve been aware of, and probably of plenty I didn’t notice. At least one pair of chickadees fledged young from it, and I was very bonded to that pair. At the start of the courting season, one was missing its tail feathers and the other had some weird scar tissue on the face that led to some of the feathers next to the eye growing in backward. The two were probably at the bottom of the flock’s social hierarchy for what were really temporary defects, and oddly enough, those defects were exactly why I keyed in on them and made sure of all my backyard chickadees that these two got the best helpings of nutritious mealworms. It was thrilling when they paired off and nested in that box elder, especially because that was a year when we were using what is now my office as our bedroom (and before I was photographing birds). I could see and hear them each morning from bed. Chickadees often excavate their own nest holes or use those of Downy Woodpeckers, and in either case, both species prefer rotten wood—a healthier tree would just not have been the right choice. A pair of Red-breasted Nuthatches nested in the tree, too, and several gray squirrel families got their start in it. 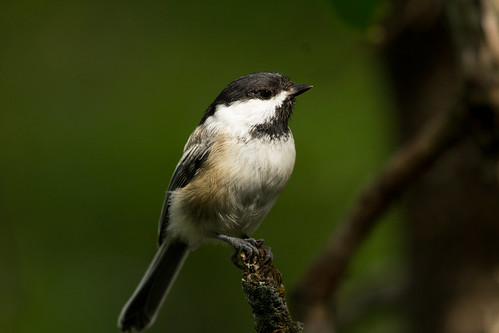 I’ve taken thousands of photos of birds, including warblers and hummingbirds,  perched on old, lichen-covered branches very close to the window. That lichen was evidence that the tree is growing increasingly rotten, and indeed, those nearby branches were attached to a limb that crashed to the ground in a storm last year. 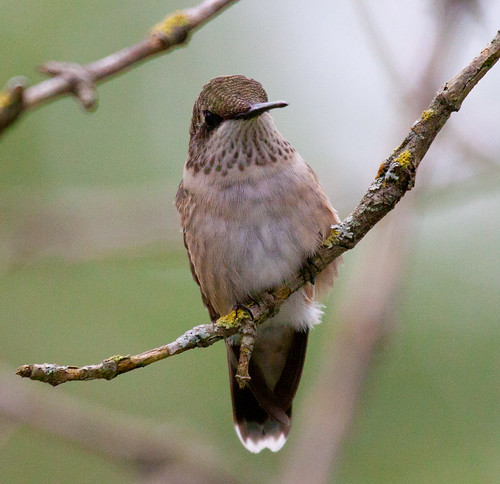 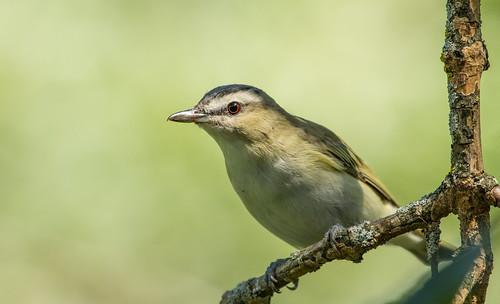 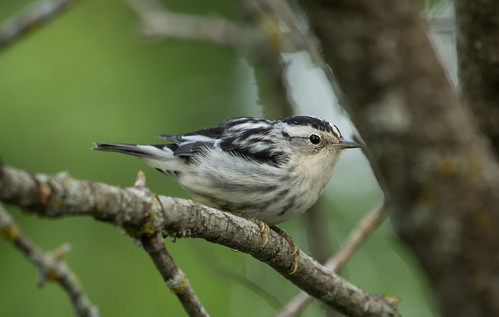 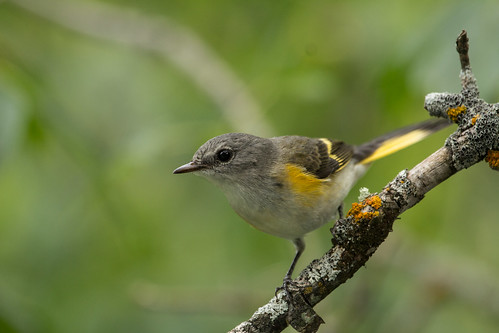 The center of the tree has developed a huge hollowed-out area where one large rotten limb fell years ago. 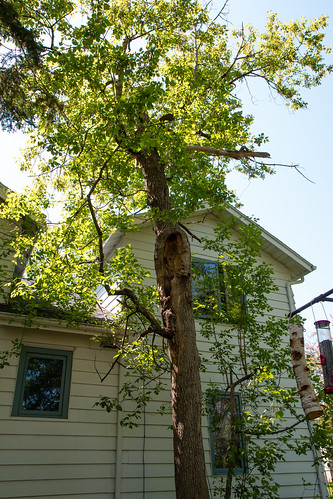 I’m pretty sure one or the other of a pair of Pileated Woodpeckers spent nights roosting in that rotted area—for a while last year, the male or female would be calling from the tree at first light. This neighborhood pair spends a lot of time in my yard, and last week when I heard one of them working in a tree, not with loud hammering but more quiet chiseling, I looked out my office window and discovered the male was inside that hollowed-out space digging out grubs. I could only see the back of his head occasionally, so I went into the yard to photograph and take videos of him. He kept at it a good five minutes, paying no attention to me or my camera, and then flew south, possibly to a nest tree a block or two away. 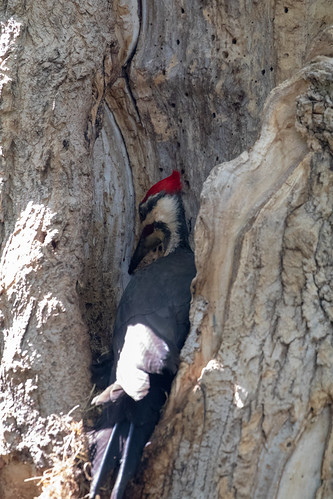 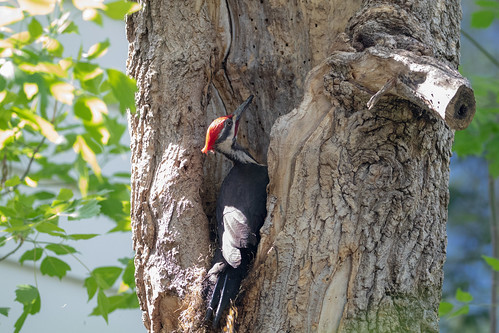 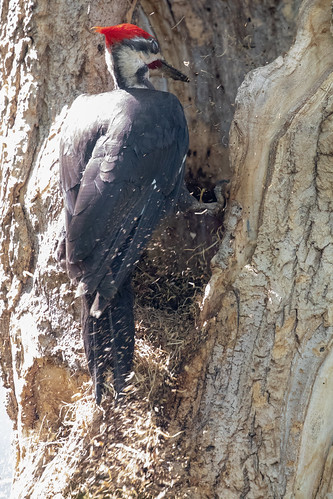 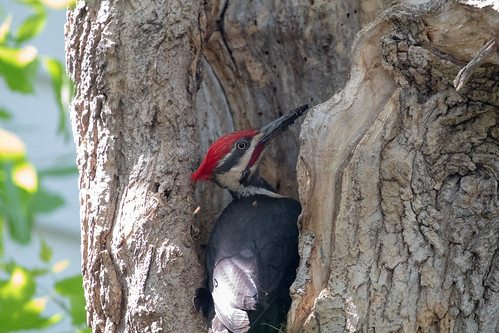 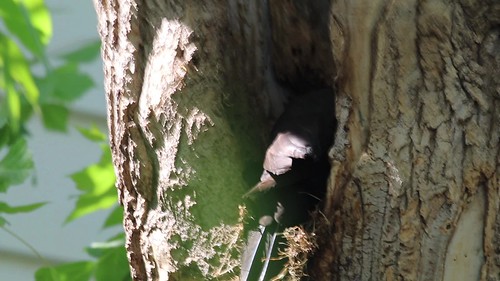 The tree is beautifully leafed out right now, and heavy with seeds. Even I can see it will not live forever. None of us do. But I’m sure glad we didn’t sentence it to an early death so many years, and experiences, ago. And that Pileated Woodpecker is glad about that, too. 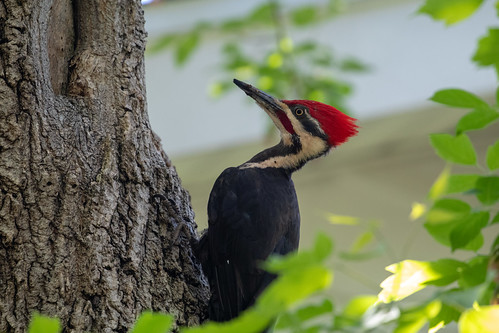