Mandarin Duck in the Big Apple

In 2013, I did a birding Big Year, trying to see as many species as I could in the Lower 48 during that calendar year. When December came around, I still had several species I badly wanted to see, so I spent a couple of weeks in California, staying with a good friend, Ali Sheehey for much of it. While we were in the greater Los Angeles area, we went to a little city park in Alhambra called Almansor Park. It was a lovely spot to start the day, and though it didn’t have any new species I’d been looking for, it did have two “uncountable” ones—species that are introduced and not yet considered established by the ornithological society of record in that state.

Both the Egyptian Goose and Mandarin Duck are not found naturally anywhere near the Americas. The Egyptian Goose ranges naturally in Africa south of the Sahara and in the Nile Valley. It was considered sacred by ancient Egyptians and appears in much of their artwork. It’s raised as an ornamental bird and has escaped captivity to become established in western Europe; the eBird range map indicates that birders have spotted it in many areas in America. 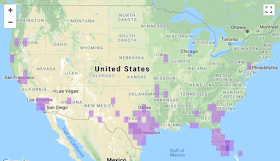 I reported mine on eBird, which tries to keep track of these sightings, in part to provide data for researchers studying how and why various escaped birds do or don’t ultimately become established.

I ended up with two different final totals for my Big Year—604 species reported on eBird, but only 595 “countable” species  reported to the American Birding Association’s Listing Central, partly because of introduced or feral species like this, and partly because of rules of countability of species like my California Condor and Aplomado Falcon, which were reintroduced and still require extensive human intervention—in 2013 they weren’t considered countable, although the ABA has now changed their rules for reintroduced endangered species such as these when sighted where they once naturally ranged.

The Mandarin Duck is a spectacular duck—the only other species belonging to the same genus, Aix, as our Wood Duck. Female mandarins look very much like Wood Ducks. 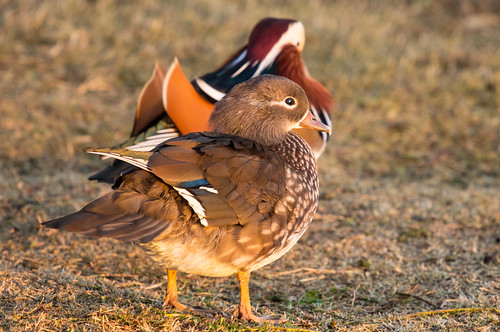 The males bear bright red bills and are crested, the overall plumage flamboyant and gaudy, like woodies, but unlike Wood Ducks, male Mandarins have two strangely enlarged orange feathers called “sails” that stick up above the lower back like sails. 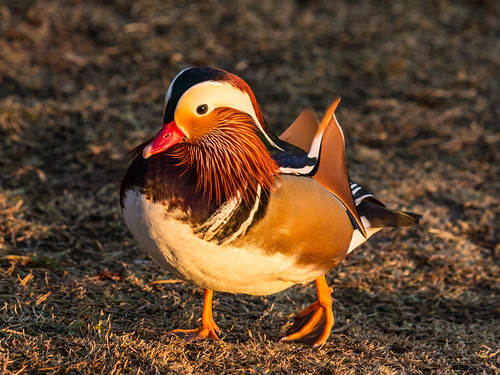 The Mandarin Duck’s natural range is limited to East Asia, but like the Egyptian Goose, it’s raised in captivity by many breeders throughout the world. A large feral population is established in Great Britain. And more recently small numbers are breeding in Ireland, especially around parks in Dublin. Black Mountain, North Carolina, has a small population, several hundred are fairly established in Sonoma County, California, and according to Wikipedia, a single individual was found in Central Park.

Did I say Wikipedia!? That Central Park individual, a stunning male in Central Park, made the news just last week, so the Wikipedia crew is apparently very on top of international birding news. But the sighting is so far not turning up on the eBird map. 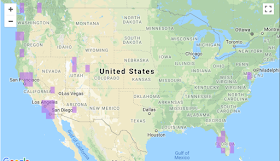 When I searched on sightings of the species in New York, eBird says there are 0 observations but 9 observations with photos—that must mean that at least 9 people have reported the bird seen in Central Park, but so far the New York eBird reviewers are not accepting the sighting. This seems short-sighted—it’s extremely unlikely that Mandarin Ducks will ever become established in New York, but this is still important data, especially considering that eBird has accepted a single sighting from Maryland.

On October 10, the Manhattan Bird Alert posted a video of the bird on Twitter. That led to a rush of people to see it. But then the bird disappeared. People assumed it had been taken by a predator, but almost two weeks later, it reappeared and has been seen here and there, in the Central Park Pond and other nearby spots. People tweeted sightings of it yesterday from the Pond, but warned that the area might not be accessible during the New York City Marathon.

Experienced birders knew from the start that this bird would never be "countable," but who could resist such a gorgeous thing, and why would they want to miss seeing it? What drew me to birding wasn’t at all the thought that I could build up a competitive lifelist of "countable" species. It was to enjoy seeing birds in nature. I completely understand that introduced species usually wreak havoc on natural systems, competing with native birds that are themselves often declining. But one gorgeous Mandarin drake in Central Park is hardly harming anything and is an absolutely stunning bird. If I were visiting my daughter in Brooklyn, I’d have certainly taken the subway to see it at least one or two times, and probably more.

It was great fun perusing the Manhattan Bird Alert Twitter feed, seeing all the photos thrilled people had posted. One person posted a photo of a Mallard, the Mandarin Duck, and a Wood Duck, labeled, “Getting all my ducks in a row.” Last week’s news included horrifying news of white supremacist massacres and attempted bombings, along with inescapable campaign ads and stunts and seeing our own army and a bunch of unregulated militia headed toward the Rio Grande Valley to head off hungry, exhausted refugees a thousand miles away. No wonder so many sought a moment’s respite watching and photographing a lovely duck swimming in Central Park.

The New York Times took notice, and on Halloween, published a great story about it. The BBC News followed suit on Friday. On Facebook, a handful of birders sniffed at the ridiculousness of anyone searching out an “uncountable” bird. That made me sad— how can we as a society agree on anything at all if the birding community can’t even agree that people should be able to enjoy seeing a beautiful bird in a park without condescending snark? At the very least, this gorgeous bird is bringing happiness to human beings at a time when happiness is in short supply. And that is something to celebrate. 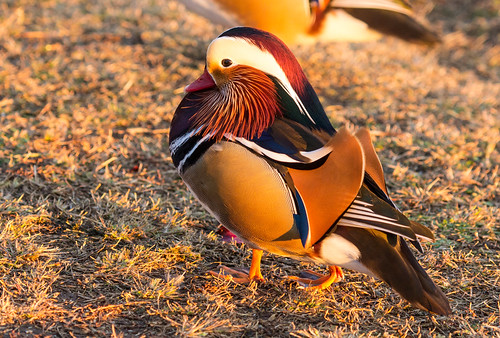