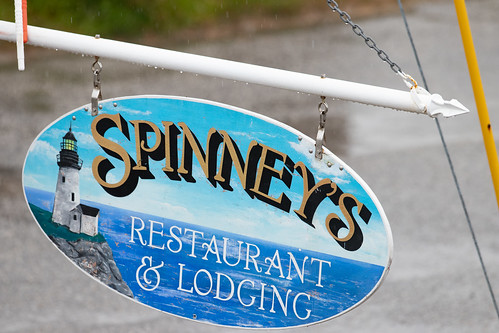 I’m sitting in a little room at a lodging called Spinney’s in Phippsburg, Maine, drinking hot tea and going back and forth between writing this and looking out the window. I stayed in this exact same room last year and was thrilled to get it again. Tragically for me, this is still the off-season when Spinney's Restaurant is open only on weekends, so I have to forego their wonderful food, but the room is plenty good enough. I arrived just as the rain started, and it’s been pouring for the past 7 hours.

It’s 43 degrees out there, with just enough wind to make this a bone-chilling day even without the rain, so I’m glad to be indoors. If I had to be stuck anywhere during a steady downpour, Spinney’s is perfect. It’s sandwiched between Popham Beach State Park and the Fort Popham State Historical Site, and the birding out the windows has been wonderful.

I don’t think I’ve ever in my life seen so many Ospreys concentrated in one spot, with as many as eight at one time cruising and hovering over the water in clear view (well, as clear a view as one can have through the rain). A Great Blue Heron has been standing on a rock at the shore this whole time. As many as 15 cormorants were swimming together in a fairly tight group, perhaps fishing cooperatively or maybe just commiserating about the weather. Several pairs of Common Eiders have also been swimming and hunting in the open water. They were calling for a while, though from a big enough distance that the rainfall overpowered my sound recording.

When I arrived, the tide was out and a flock of shorebirds was gathered in the inlet right outside my window, including Black-bellied Plovers, Ruddy Turnstones, Willets, and Short-billed Dowitchers. I was thinking of this as a nice flock, but then I saw a female Black-bellied Plover very un-nicely attack a Ruddy Turnstone, grabbing its wing and tail hard—the poor turnstone had trouble escaping. The Birds of North America states that Black-bellied Plovers sometimes show aggressive behavior toward Ruddy Turnstones, but the turnstone seemed to be minding his own business until the plover charged and grabbed him. My photos out the window are unfortunately blurred, but at least document this interesting interaction. 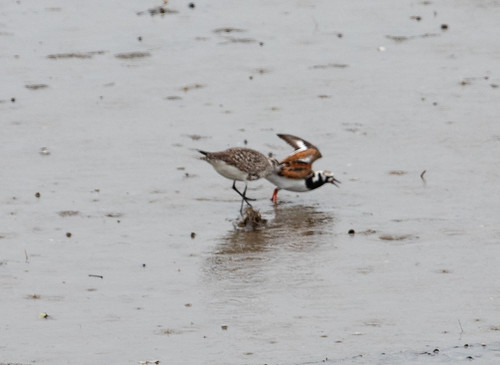 Quite a few terns were hunting over the water as the tide started coming in. Most were Commons, but I picked out at least three Arctics and, because one good tern deserves another, a Roseate Tern, too. By then my window was too covered with raindrops for photography.

A catbird sang close enough for me to hear it through the closed window, but the weather must have gotten to him because he sang for less than a minute. A Song Sparrow was less easily daunted—he sang for long stretches for the first three hours. All in all, without leaving this room, I’ve seen 21 species, which isn’t at all bad for being stuck indoors in the pouring rain.

If the weather prognosticators are right, the rain will end about sunrise. I’ll load up my car, check out, and head straight to Popham Beach to spend a few hours with Piping Plovers before I drive up to Mount Desert Island for the Acadia birding festival. I had a great time with Piping Plovers just yesterday, when Maine Audubon’s Laurie Gilman took me to Laudholm Farm, home of the Wells Reserve. 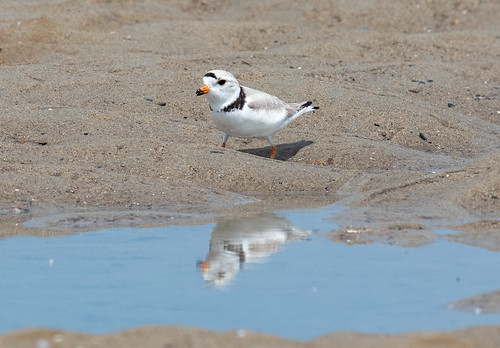 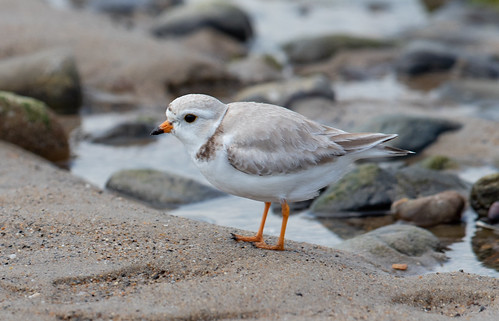 I’d also been hoping for Saltmarsh Sparrow, which I had no luck with, but the plovers more than made up for it. As cooperative as they were for photos, they were overall pretty quiet, and I badly want some sound recordings, so I’m hopeful that the rain will end as it’s supposed to, the wind won’t be too bad, and the plovers will be cooperatively noisy. Whether or not any of that happens, I’ve sure had a lovely day hunkered down at Spinney’s.