Interacting with Black Vultures and people on the Anhinga Trail. 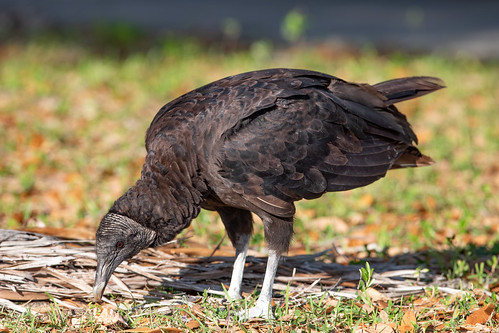 A year ago when Russ and I visited the Anhinga Trail in Everglades National Park, a small group of Turkey Vultures met us in the Royal Palms parking lot. Some stayed politely in the trees surrounding the parking lot, and some took advantage of the first thermals of the day forming over the hot pavement to circle overhead.

This time, we were greeted by a host of Black Vultures, an entirely different animal with far different approaches to interactions with our species.  They were all up in the trees when we arrived late in the day on our first visit, but when we arrived first thing the next morning, several of them were sitting on cars.

I vaguely remembered reading about Black Vultures ripping off the rubber from windshield wipers and the rubber seals on windows and sunroofs, so I told Russ we’d better be careful. Our rental car didn’t have a sunroof, but it did of course have windows and windshield wipers. We saw one person putting a tarp over his car, and Russ asked him about it—he said there was a supply of tarps and bungee cords by the bathrooms specifically for protecting cars. The National Park Service website explains this, though we didn’t know about that till we got home. 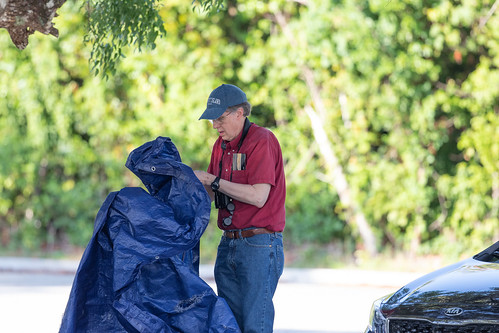 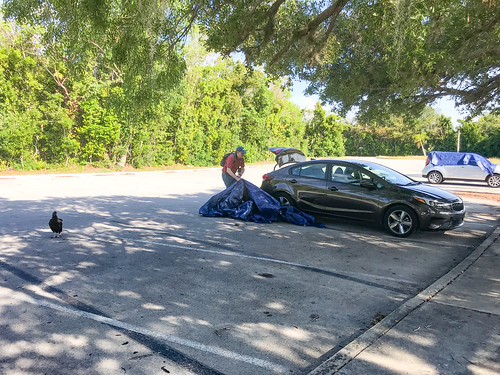 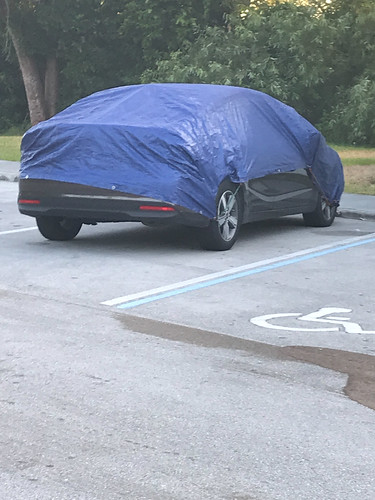 Russ spent several minutes covering our car, and then several more minutes talking to newcomers and helping them get tarps on their cars. Meanwhile, I started feeling a little sick, so I didn’t get much birding in before we took the tarp off and headed for our planned overnight excursion to the Keys.

At some point along our drive I realized that I’d managed to lose three things: my favorite Tilley hat, my senior pass to the national parks, and a small black foam windscreen for the built-in microphone on my sound recorder. I usually don’t lose things, so this trifecta seemed pretty ominous. Two mornings later, when we were back in Florida City, we headed back to the Anhinga Trail. The gift shop was closed when we got there, but in the parking lot, nowhere near where we’d parked or I’d walked, I found my windscreen. It had a small gouge where a Black Vulture had bitten into it, but the damage was minimal—apparently small foam windscreens aren’t as tasty as the rubber stripping on car windows.  Of course, of the three things I’d lost, that was by far the cheapest and least important.

It was only about 6 am, and the one car already in the parking lot didn’t have a tarp over it. Russ again spent a few minutes putting a tarp over our car while I walked on the boardwalk to where some baby Anhingas had been perching two days before. When I saw a couple strolling along, I didn’t think to warn them about the vulture situation. I got some good photos and recordings of the Anhingas begging and then saw that it was almost time for the gift shop to open. It was in view of the parking lot, and I could see that several vultures were on the other car so I ran out and chased them off. Russ had already chased them off twice and was now leading the couple to the parking lot. By then, the birds had stripped off several inches of weather stripping around the sunroof. We felt bad for the car owners. Like us, they were from Minnesota where people and vultures are expected to be more civilized.

The gift shop was just then opening, and as we walked in the door, I saw my Tilley hat behind the counter. I was certain my senior pass was gone forever, but Russ asked about it just in case, and voila! The employee opened the cash drawer and there it was. Sometimes I feel a little cynical about people. This was just the thing for restoring my faith in my own species even as I lost some of my faith in my own competence.

The staff at the Anhinga Trail are doing a great job of trying to help people and Black Vultures to co-exist. They aren’t allowed to be too specific with their advice—based on the holes we saw in the tarps, nothing is 100 percent effective against a strong-willed Black Vulture with a hankering for destruction or a hunger for rubber. Our rental car came through the experience unscathed, I have a wonderful souvenir in the form of my bitten microphone windscreen, and Russ and I left the Florida Everglades with warm feelings toward the birdlife, including those naughty vultures, and toward the staff and visitors. The day was filled with happy endings for us, even if it wasn't quite so joyful for that other couple.