I spent part of the first day of summer tracking down, recording, and photographing a young male American Redstart in my backyard. I’d been noticing him singing most days since I got home from Maine two weeks ago. He hasn't varied his tune at all during the times I've been listening. Recording in my neighborhood can be frustrating because a microphone pointed in any direction picks up traffic noises, train whistles, lawn mowers, dogs barking, and other human-associated noise, and Friday was windy besides, adding even more background noise. Fortunately, my new, long shotgun microphone filters out more background noise than my shorter one, so when I can get close to a bird, my recordings can be fairly clean. And this little warbler was singing so persistently, apparently desperate to attract a mate, that I took pity. I most decidedly don’t fill the bill as an appropriate mating choice, but at least now he can boast that he attracted one female.

In my 7 minute recording, he sang  67 times. The full recording, along with photos of the plucky little guy, are permanently linked to at the American Redstart species page on my website.

Most songbirds come into breeding plumage by the time they’re one year old, but not redstarts. Males that hatched last summer—that is, the birds ornithologists call second-year males—don’t look anything like the black and orange older adult males. 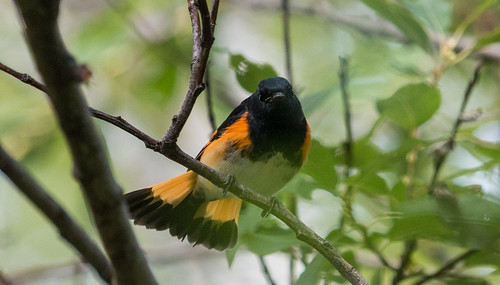 Even though they’re perfectly capable of breeding, yearlings look quite a bit like females. By the time most redstarts are starting to nest, these young males sometimes start showing individual black feathers around the eyes, throat, and back, but won’t come into full breeding plumage, which in their case is called definitive basic plumage, until they molt during the autumn after their first birthday.

This delayed plumage maturation probably makes older adult redstarts more tolerant of the younger ones, or at least a bit less likely to attack them. Birds all prefer mates with more experience, so females aren’t likely to settle for a second-year male if any older males are available, and most second-year males spend the summer gaining experience in basic life skills in the north woods. When a male, second-year or older, does attract a mate and commences nesting, he's responsible for defending the family territory while she lays and incubates the eggs and broods young nestlings. When the eggs hatch, both parents share, pretty much fifty-fifty, the other chores of parenthood, including feeding the nestlings and cleaning up after them. Once the chicks fledge, the parents each take half. Fledglings who stay with the male often linger around the nest area with him—he's very bonded to the territory he claimed and defended from the start—while the mother and the chicks who follow her often wander more widely. This allows the family to access food from more sources, ensuring more for everyone.

All that is in the future for the little guy in my backyard. It’s not only his plumage that betrays his inexperience. My yard does hold a patch of reasonably good habitat, but only a small one. Crows nesting in the yard behind mine have been raiding a lot of local bird nests to feed their voracious young—I think they took out two batches of baby Red-eyed Vireos from one of my box elders last year. This year the vireos are wisely nesting further away, where their every movement isn't under scrutiny by the nesting crows. Grackles also occasionally prey on tiny nestlings, and a pair is nesting right above where this redstart has been singing most. To top it off, a pair of Merlins is nesting just three blocks away—they don’t raid nests, but are excellent at hunting down warblers and other tiny birds. So it’s no accident that redstarts have never nested in my yard in the 38 years we’ve lived here.

Within the next few hours, days, or weeks, my optimistic young male may figure out why Peabody Street isn't the greatest place to nest and move on, or he may simply give up when no females show up. Meanwhile, I’m thrilled to have a seven-minute, uninterrupted recording and a few photographs to remember him by. Live long and prosper, little guy.