Did you ever find yourself enjoying your favorite thing in the world—say, getting out into some wonderful wild habitats to listen to and look for birds—in the company of a genuine kindred spirit? I found myself in that happy situation at the Southeast Arizona Birding Festival when I got to spend an evening and then an afternoon with Laurens Halsey, a fantastic local birder and independent guide. Laurens specializes in taking out small groups—just one or two people is his preference—and he especially focuses on night birds. His hearing is amazing—I think he pulls out birds better than I could at my best when I was younger.

On Friday evening, I was assigned to co-lead a field trip for night birds with Tim Helentjaris. Tim had arranged to meet with Laurens, who happens to keep close tabs on owls in Madera Canyon, including two different screech owls, which live at two different elevations, in two different sets of habitats.

We started out at mid-level, where we heard well and got an excellent but brief look at one of what sounded like a family unit of Whiskered Screech-Owls.  I didn’t get photos. Even better as far as my personal lifelist goes, in the same spot we heard a Mexican Whip-poor-will. That bird started out far enough away that when I focused incredibly hard, with my hearing aids cranked up to 11, I could barely hear it. But then it came in close enough for me to get a short recording with my cell phone. A distant Elf Owl was not so cooperative, but I heard two of its calls.

At the lower, more desert-like stop, a family of Great Horned Owls was about, at least two chicks making constant begging calls. The obvious presence of the big predators kept smaller birds pretty quiet, but we managed to hear a distant Common Poorwill—again, I would never, ever have heard it without Laurens pointing it out—and then, finally, the evening’s pièce de résistance, a calling Western Screech-Owl who not only let me get a few recordings but also some photos. 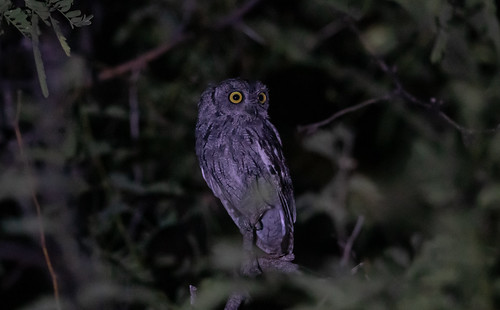 The little screech owl had to be on red alert for Great Horned Owls, though the big bruiser near us was an inexperienced fledgling who squawked persistently, telegraphing its whereabouts every several seconds. Our group stayed in one mass, easy for the tiny owl to keep track of, too.

Laurens shone a flashlight on the screech owl—not a powerful spotlight but a good flashlight—as it hunted large insects, looking every which way. When the bird faced directly toward us, the pupils constricted, but when it looked to the sides, the pupils immediately dilated, so we didn’t seem to be disturbing it much—it continued quietly calling throughout. 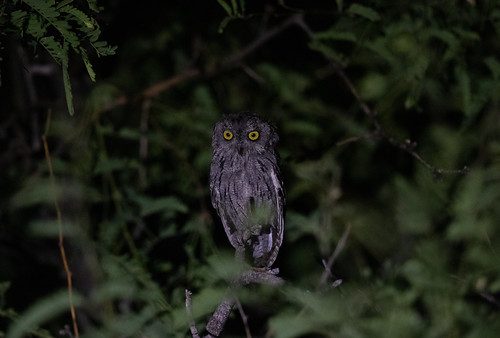 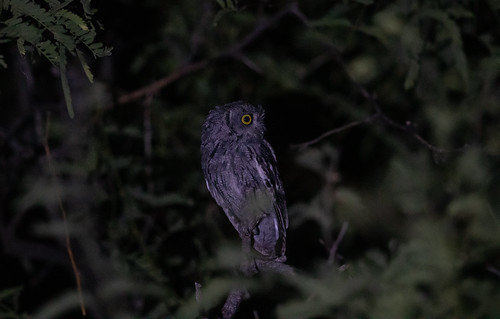 Several people commented about how softly this owl and the Whiskered Screech-Owls called. That quietness is something people often notice when they see a nearby Eastern Screech-Owl calling, too. The word screech suggests loudness, and we’re so used to turning up the volume on bird recordings to suit our own preferences that we expect the living creatures to call at a higher volume too. I’ve been out with guides and field trip leaders who carry little speakers to boost the sound on their recordings, as if they don’t realize that real birds don’t yell. Male birds can be intimidated by such loud sounds by what they perceive as competitors, and in at least some cases, females seem to grow disenchanted with their own mate after hearing an electronic male demonstrating such prowess.

In my experience, when playback is used to attract birds, less is more in terms of both ethics and effectiveness. Indeed, the only reason the Mexican Whip-poor-will came in so close to our group was because Laurens played a recording on his cell phone, softly and just a few times. Birds are curious, but also busy with their real lives, so it may take them a few minutes to fly in to check out the new bird in town. Patience is way more important than annoyingly loud persistence.

I was thrilled going out with Laurens for both his deep knowledge of the local avifauna and his ability to use playback respectfully and minimally. And when we were getting ready to move on after our supremely satisfying experience with the Western Screech-Owl, something else struck home when Laurens gave it a nod and said "Thank you." I very often thank birds for wonderful experiences, too, but never ran across a professional guide who does this, at least not out loud. That was splendid.

I ran into Laurens and met his wife Awshee on Saturday, and it felt like we were old friends. Then on Sunday, I ran into him at festival headquarters after my last field trip. One bird I’d talked about in my keynote the night before was the Five-striped Sparrow. None of my field trips had visited the right spots for it, but out of the clear blue sky, Laurens offered to drive me over to the easiest spot for them, Box Canyon. 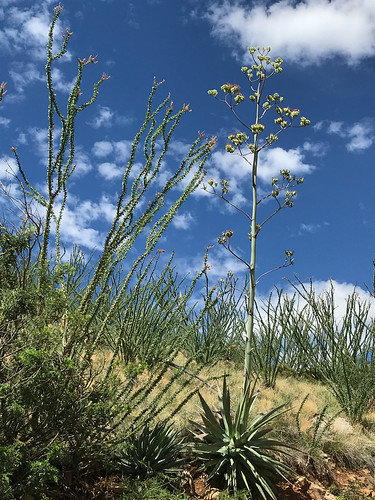 Five-striped Sparrows have a soft, delicate song. With my hearing aids set at their highest volume, I managed to hear the three individuals that Laurens could easily pick out, one close enough for me to hear quite well. I got a quick glimpse of that one flying past, too, but no photos. I wasn't disappointed. Even as my hearing goes south, hearing birds sing strikes as deep in my soul as seeing them does. I don't know if it's my background in music, or my childhood adventures with imitating my Grandpa's canaries and our neighborhood cardinal, but hearing birds has always been plenty good enough for me. 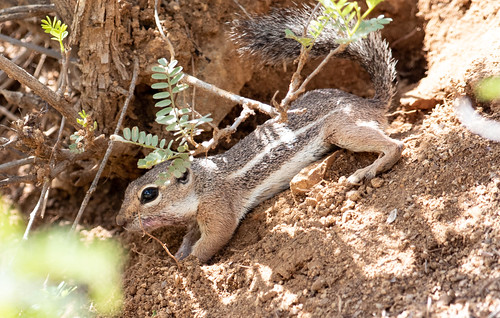 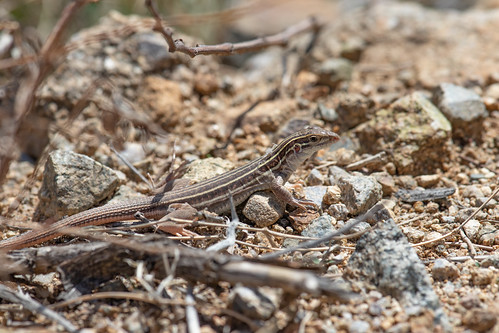 That final afternoon of the birding festival was magic thanks to the sparrows, a little flock of Common Bushtits and Verdins, distant Cactus, Rock, and Canyon Wrens, and more—such splendid avian company along with other cool wildlife and a top-notch birder who seems like a genuine kindred spirit. All in all, my last birding stop in Arizona was about as perfect as it could possibly be—a story-book ending to a perfect adventure. 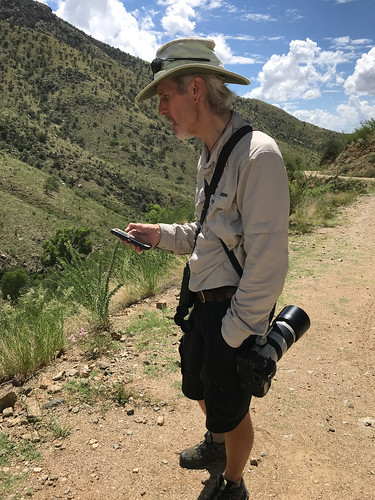