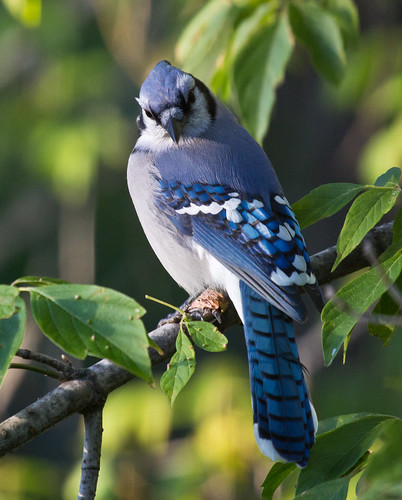 On Sunday, September 8, I was writing away at my desk treadmill when I noticed a Blue Jay sitting in the box elder right outside my office window, staring straight at me. It’s been at least one full year since I set out peanuts for jays. A couple of squirrels often approach me when I’m in the yard and I usually toss them a peanut, but I haven’t been leaving extras out for birds because of my neighborhood’s rat problem.

On the off-chance that this Blue Jay remembered me from a year or two ago, I went outside with a handful of peanuts and left them on the usual stump. I whistled the way I used to whistle when I fed jays and started back for the house. Before I reached the door, the jay was already on the stump sorting through the peanuts—it grabbed the biggest one and flew off. Within 5 minutes, that jay and some others had taken them all, so I didn’t have to worry about any rats getting a free meal. I went back to work, and twice more, the jay showed up, gave me a long, hard stare until it caught my eye, and got rewarded with peanuts. The fourth time, another Blue Jay came with it—I think the first jay had told it, “Watch this—I trained a human to hand out peanuts!” Some Blue Jays may doubt that humans are intelligent, but they have to concede that some of us are trainable. 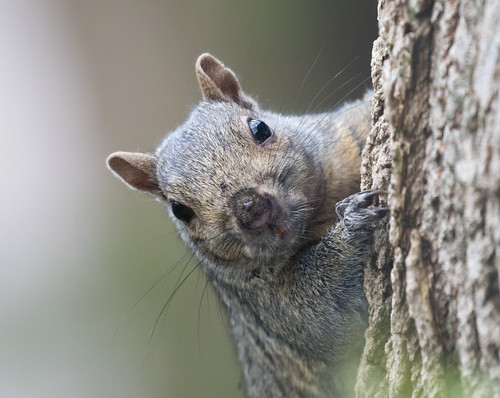 That same day, I read a New York Times story about a study done at Oberlin College that showed that squirrels not only notice when birds make alarm calls; they also seem to relax when birds are making relaxed calls.

People continue to be surprised that animals notice and respond appropriately to obvious signals within their environments. The more animals are discovered to be able to make and use tools, like Green Herons using bits of bread to bait fish, or New Caledonian crows fashioning hooks to pull food from otherwise inaccessible crevices, the more desperately members of our own species try to affirm our superior intelligence. Of course no bird or squirrel has ever invented a bomb, nuclear weapon, or even just an assault rifle, nor has one ever been able to learn to read in any language, invent a vaccination that could save millions of lives, or write or read ridiculous, easily disprovable studies saying vaccinations cause autism or that there is no such thing as climate change.

It feeds my ego to believe I’m smarter than the Blue Jays and squirrels in my backyard, but I’m not entirely sure that it makes sense to believe my species is. Birds and squirrels take note of potential dangers and figure out what to do to protect themselves, their families, and their whole neighborhood—squirrels may be noticing bird calls to tell them about local conditions, but they also alert those birds with their own calls when they discover something dangerous. Blue Jays are credited with planting the eastern oak forests following glaciation, ultimately providing food for thousands of generations of Blue Jays. Their eagerness to plant acorns may have been based more on instinct than genuine forward thinking, but I wish we humans could cultivate that kind of instinct to give our children and grandchildren a better future.

Squirrels are smart enough to know that paying attention to how well birds are faring directly affects their own well-being. When, by a huge, bipartisan majority, Congress passed the Endangered Species Act of 1973 and Richard Nixon signed it into law, I truly believed that our species was now enlightened enough to have set in stone permanent protection of every one of our fellow creatures, for their own sake and for ours. After all, even rodents are smart enough to know that when birds are safe, so are they.

But since the 1980s, corporate America and wealthy developers have been lobbying to eviscerate the Act, pressing to make it almost impossible for new species to be listed for protection no matter how devastatingly their numbers are declining, and to chip away at enforcement.

Now suddenly science itself—the discipline that, more than anything else, is cited to prove our so-called superiority to animals—is in jeopardy.  Last week, the National Oceanic and Atmospheric Administration issued a memo cautioning scientists that even if people in their area were preparing for a hurricane that had no chance of hitting them, meteorologists must *not* correct totally inaccurate weather predictions made by an angry old man shaking his fists at clouds and drawing his own weather maps with a sharpie.

Are we humans as intelligent as Blue Jays and squirrels? The jury is still out, but it’s not looking good. 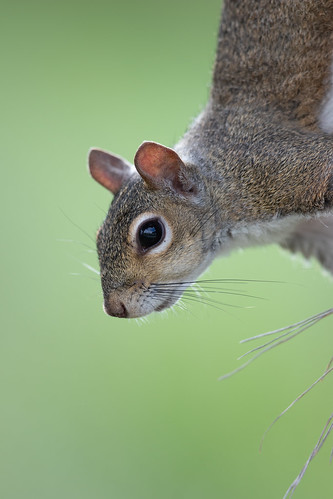