What Are Scrub Jays? 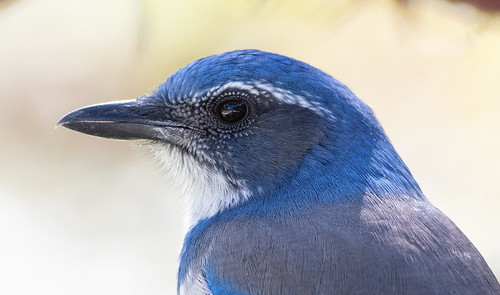 When I started birding in 1975, there was a wonderful bird species called simply the "Scrub Jay."  My Peterson field guide, which covered only the eastern half of the continent, called it just the "Scrub Jay;” in the text, the second edition said it was the Florida race of the Scrub Jay.

Both my original Golden Guide and the second edition, published in 1983, covered the whole continent, and both editions called it the Scrub Jay, the range map showing it both in Florida and in the West.

National Geographic reused that same plate in the second edition, too, but by the third edition, published in 1999, the guide showed three different species of scrub jays and more. The Florida Scrub-Jay (found only in Florida) and the Island Scrub-Jay (found only on Santa Cruz Island in California’s Channel Islands) were straightforward. But that edition showed two different plumages for the Western Scrub-Jay, and now gave them subspecies names, too: interior, or woodhouseii, and coastal, or californica.

That page stayed the same in the fourth and fifth editions, but by the sixth edition, it gave detailed plumage descriptions of the coastal and three different types of interior Western Scrub-Jays, illustrating the Texas Hill Country type, texana, separately from the nevadae subspecies and noting that the woodhouseii subspecies was similar to nevadae.

When the seventh edition came out, the California Scrub-Jay, which had previously been called the "coastal form," had been split as a separate species. Now the three interior subspecies form a new species called the Woodhouse’s Scrub-Jay. This newest edition of the National Geographic guide is still showing two types, the nevadae type which it says is pale like the woodhouseii subspecies, and the texana form found in Texas Hill Country.

Perhaps by the time the next edition comes out, we’ll have added the Nevada (which I've seen in Arizona and Colorado, too) Scrub-Jay and/or the Texas Scrub-Jay. All that from what was once just the plain old Scrub Jay.