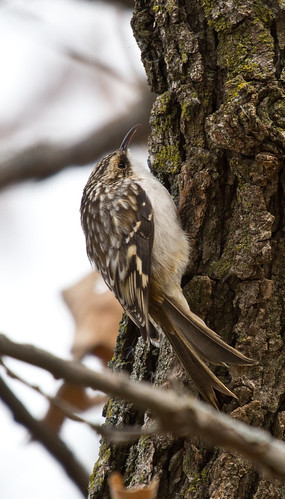 On April 8, I had a most welcome sighting in my backyard—a Brown Creeper, one of my most beloved birds for many reasons. Then on April 12, I got an email from KAXE listener Polly Edington of Grand Rapids, who wrote:


Yesterday I saw this bird (first time recognizing it!) on our pine tree outside our kitchen window! And again this morn...looked it up in your bird book and marked it down!

I love to hear from people that my ABA Field Guide to Birds of Minnesota is helpful, but even more, I love Brown Creepers. These tiny birds, the only members of the family Certhiidae in the Americas, are cryptically colored to match tree bark. They have a delicate but long bill, curved downward, and long, stiff, tail feathers that curve downward to brace them against vertical tree trunks. Their toes are slender but strong, the hind toe with a long, strong claw, an additional brace helping the bird hitch its way up tree trunks. 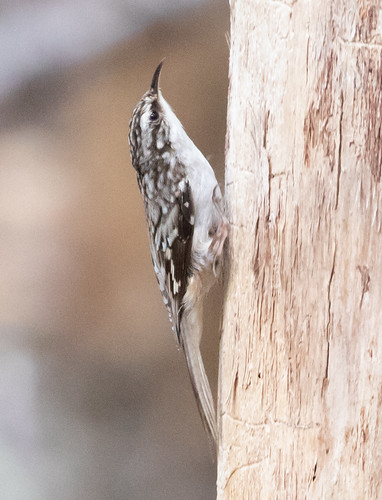 I saw my first Brown Creeper on December 16, 1975, at the Morton Arboretum outside Chicago. The next month, on January 30, 1976, I saw my first for my Michigan list at Baker Woodlot on the Michigan State University campus, and by February, according to my field notes, I was recognizing the tiny mites by sound. Their lovely high-pitched sound is beyond my hearing now unless I crank up my hearing aids to eleven and the creeper is very close. Losing the Brown Creeper calls and songs is one of the bitter tragedies of old age, but it’s well offset by the joy of still being alive and able to see these wonderful birds.

Brown Creepers live up to their name, creeping up tree trunks, often in an upward spiral, until they encounter too many branches, when they flutter down to a low spot on another trunk and creep up that one. If they continue up a limb, they gravitate to the underside. 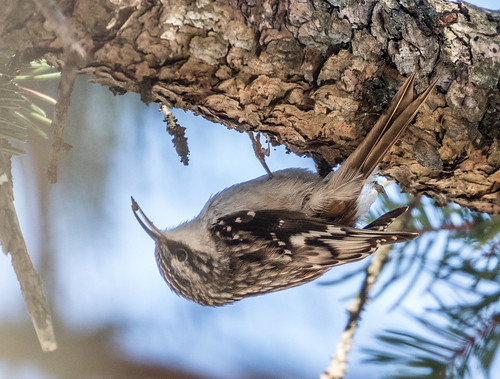 Arthur Cleveland Bent put together a wonderful series of books about the life histories of North American birds, and gave Winsor Merritt Tyler the honor of writing the Brown Creeper entry. He opened it with this superb description:


The brown creeper, as he hitches along the bole of a tree, looks like a fragment of detached bark that is defying the law of gravitation by moving upward over the trunk, and as he flies off to another tree he resembles a little dry leaf blown about by the wind. As he climbs up the tree, he is feeding, picking up tiny bits of food that he finds half-hidden in the crevices of bark along his path. In his search, he does not work like the woodpeckers, those skilled mechanics whose work requires the use of carpenter’s tools, the drill and chisel. The creeper’s success depends on painstaking scrutiny, thoroughness, and almost, it seems, consciousness. Edmund Selous (1901), speaking of the European tree-creeper, a bird close to ours in habit, uses the exact word to show us the creeper at work. “His head,” he says, “which is as the sentient handle to a very delicate instrument, is moved with such science, such dentistry, that one feels and appreciates each turn of it.

Creepers seem as earnest and focused as they are sentient, and seem to be as introverted as songbirds could be. Occasionally during migration I spot two or more in the same swath of woodland, and they often hang around near chickadee winter flocks, but they hang out on the periphery of the flock, never in the thick of things, and often when the flock moves on, the creeper lingers. It’s only in their nesting woods that we’re likely to see two near each other, and even then, except when doing their charming courtship flights, they stay focused on their own work, like a couple who may be deeply in love but manage to ignore each other completely for hours at a time as they each work from home during a time of social distancing. 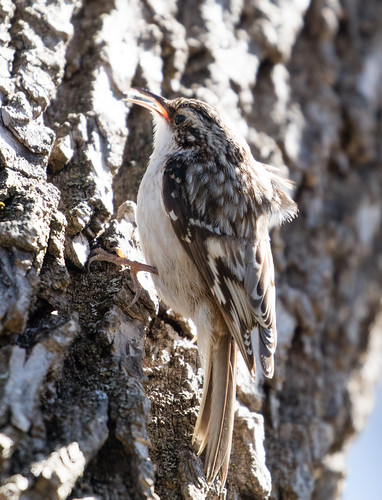 Even the most introverted among us fall in love, creepers included. I’ve only seen a courtship flight a handful of times in my life. Winsor Tyler describes it beautifully and accurately:


Once in a while we see a bird launch out from a tree and at top speed twine around it close to the bark, then dart away and twist around another tree, or weave in and out among the surrounding trees and branches. He has thrown off his staid creeper habits and has become for the time a care-free aerial sprite, giving himself up, it seems, to an orgy of speed, wild dashes, and twists and turns in the air. But after a round or two, back on the bark again, he resumes his conventional routine and becomes once more a brown creeper.

Bird observers in the early 1800s claimed the Brown Creeper nests in cavities, but in 1879, Thomas Brewer wrote that the normal nest, as with the European creeper, is built between a tree trunk and a flap of partially detached bark. Sure enough, the next spring, William Brewster used that tip to search trees near Lake Umbagog in Maine and discovered quite a number of nests.

On May 1, 1976, Russ and I went on a Michigan Audubon trip that included a nice long stop at Hartwick Pines State Park, where we saw a Brown Creeper nest. It was the loveliest thing—so exquisitely concealed on the truck of a huge white pine, the hammock-shaped nest woven of bits of bark, fuzzy material such as spider silk, and Usnea lichen wedged where a large piece of bark was jutting out. (Tragically, that was before either of us were taking bird photos.)

Creepers are so quiet and cautious that I’ve never seen a fledgling. Winsor Merritt Tyler wrote of one brood:


At 8 am, two were clinging, 30 feet from the ground, to the trunk of a living white pine tree which stood not far from the nest. One or two more were on another pine trunk. The little birds were extremely difficult to find by reason of their small size, their distance from the ground, their inconspicuous color and especially because each took a station in the dark shadow immediately below a horizontal limb. Here they remained motionless for many minutes. Later, two young birds, one following the other, moved upward by feeble hitches and perched or squatted close to the trunk in the right angle formed by the limb. In hitching over the bark, they moved almost straight upward and whenever I saw them as a silhouette against the sky, and could thus determine the point, they did not use their tail for support. The shortness of the young Creeper’s tails gave to their bodies a rounded, unbird-like outline and, with their short, stubby bills of wide gape and their squatting position on the upright bark they suggested tree-toads in no small degree. Like most young birds after they leave the nest, the fledgling Creepers were more noisy than they’d been the day before. They announced their whereabouts to their parents with a note not previously heard—a high sibilant call, “tssssi” or sometimes clearly divided into two syllables thus: “ts-tssi” The voice was very slightly tremulous and, although the pitch and delivery of the notes were decidedly Creeper-like, they suggested to Mr. Faxon and me a flock of Cedarbirds.

It’s during spring and fall that most of us get to enjoy creepers in our backyards. They’re usually so quiet that you have to pay attention to notice them in the first place. They aren’t all that concerned with our presence, but are tricky to photograph because they blend in so well with the bark. From mid-spring through late fall, I see them just about every time I go to either Twin Falls or Big Pete Road in Port Wing, Wisconsin. I love being able to count on them there, but there’s something special about the ones that I see in my own backyard even when I'm not hunkering down during a pandemic, so I relished the one I saw April 8. I'm thrilled that Polly discovered one of these wonderful birds, too. 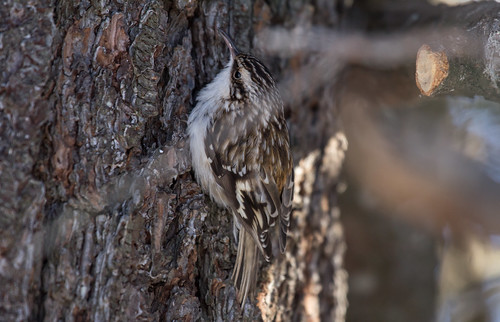