The Little Beth of the Bird World 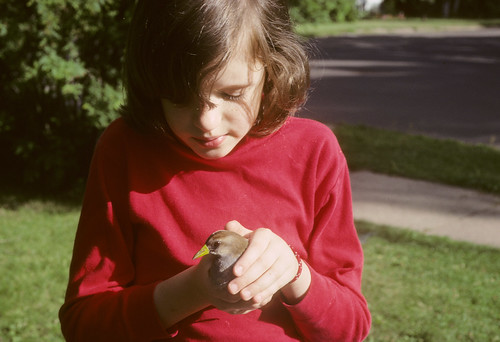 In the summer of 1993, I read Louisa May Alcott’s Little Women to my children, and we naturally wanted to know which bird was like which character. We knew right off that Jo was a Blue Jay: noisy, raucous, and perky, with a jolly sense of humor. People considered Jo a tomboy, though she was really just a child more interested in play and excitement than in the opposite sex, just like a young Blue Jay.

Amy, bright and flighty and bossy, with rather a long nose, seemed exactly like a hummingbird. Meg, pretty and domestic, was a Rose-breasted Grosbeak. But how about shy, retiring Beth? A sparrow might seem the obvious choice, but although their plumage may be unobtrusively plain, sparrows sparkle with life and mischief. Every injured sparrow I’ve handled has resisted me with feisty spirit and even outrage—little unassuming Beth was far meeker than that. Nighthawks are meek and mild, but even they hiss violently when frightened. No, we couldn’t for the life of us figure out what kind of bird adequately represented Beth.

But soon after we finished reading the book, one Saturday, a shy little Beth was delivered right to our door, in the form of a Sora—an adult female who became lost on migration and ended up in a Duluth backyard. 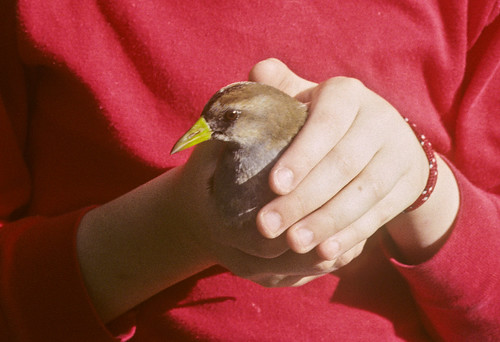 Soras, who belong in cattail marshes or very wet meadows, have a quiet beauty much like Beth’s. They’re chunky, gray below and brown and black above with lovely white flecks. They have a little pointy stub of a tail which they cock and flick as they skulk in and out of cattails. Their musical call is charming, but like Beth, they prefer performing their music under cover where no one can see them.

This poor bird must have crash landed—she had two broken legs. Even before I attended to her injuries, within minutes of her arrival, she was taking mealworms and drips of water from my hands, and then quietly and patiently allowed me to splint her legs. When most wild, injured birds act gentle and calm, it’s a sure sign that they’re in shock and close to death, but every Sora I’ve handled has been amazingly trusting and tame no matter what its physical condition. Arthur Cleveland Bent wrote of Soras captured as adults and kept in captivity during the late 1800s and early 1900s, when it was still legal to make wild birds into pets. In all cases, the birds adapted to captive conditions within a few days. I felt an enormous responsibility for this Sora’s care because of the trusting way she looked at me through her bright, confiding eyes.

Soras have long been hunted as game birds. But even Mr. Bent, an inveterate hunter of birds of all kinds, felt uneasy shooting them. He wrote:


When fattened on the succulent grains of the marshes, its flesh is excellent food. But, to my mind, it is too small, too tame, and too easily killed to afford really good sport, in which the bird should have a sporting chance for its life.

Bent wrote of individual hunters who shot as many as 195 Soras in a few hours. Eventually a bag limit was imposed, but to this day, Soras are legal game. They lay normal clutches of 10 to 12 eggs, and occasionally up to 18, so one would think there’d be an awful lot of them around, but so many of the wetlands they need have been drained or polluted that they’re far rarer than they should be. I saw and heard them far, far more often in the 1970s and 80s than I do now—it’s heartbreaking to go to my favorite marshes, where once I could hear a half-dozen or more as I stood in one spot, and now hear zero. The world could use more of these shy, gentle Beths.