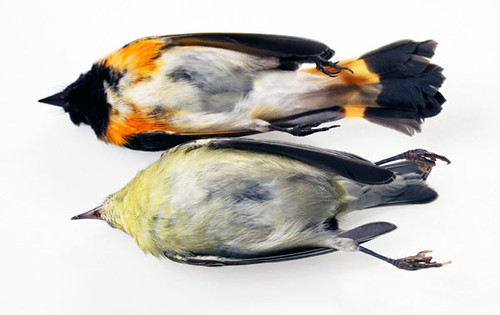 This week, KUMD aired a couple of programs I produced in 2011 about my involvement in a court case setting the Friends of the Boundary Waters against AT&T when the corporate giant wanted to construct a 450-foot tower, with guy wires and lighting, right on the edge of the Boundary Waters Canoe Area Wilderness. Birds have trouble seeing, or at least gauging their distance from guy wires. And the lights required by the FAA on all structures higher than 99 feet seem to attract nocturnal migrants into the lighted space, resulting in collisions with other birds, the tower, or the wires. I was of course concerned about the potential for serious bird kills. The Friends of the Boundary Waters cared about that and the wilderness values of this wonderful gem of the natural world.

Minnesota’s Environmental Policy Act stipulates that if a project is shown to pose an environmental problem and an alternative plan could mitigate it, the project should be rejected regardless of how much more expensive the alternative is. Experts testifying for Friends of the Boundary Waters found that building one 99-foot freestanding tower, which wouldn’t harm birds at all because it wouldn’t have guy wires or bird-attracting artificial lights, an important wilderness value as well, would provide almost as much cell phone coverage as the proposed 450-foot one, and that two 99-foot towers would provide significantly more coverage than the proposed tower for not much more money. The benchmark AT&T uses to decide if a project is worth pursuing is if they recover their investment in 60 months. AT&T said that the investment for building two towers would be recovered in 63 months, which they claimed was prohibitive.

The District Court judge’s findings agreed entirely with the Friends of the Boundary Waters on every count. He wrote that bird mortality would be far greater than what Kerlinger said, that the cost difference wasn’t relevant because of the state’s Environmental Policy Act, and agreed that the tower’s artificial lights would harm the natural beauty of a legally designated wilderness. AT&T appealed, and in 2012, that court threw out the original ruling, saying the tower would promote public safety period. And the Minnesota Supreme Court refused to hear the case.


***
Radio transcripts and blog posts about the BWCA case

So the tall, lighted, guyed tower was built in 2013. Towers that kill just one or two, or even zero, birds on most nights can take out thousands, or tens of thousands, on a single foggy night when migration conditions are right, but cats, foxes, coyotes, crows, ravens, and other scavengers quickly take carcasses before people can find them, even if they monitor the entire area beneath a tower starting early every morning. And towers are usually constructed on private land where trespassers can be prosecuted, making it impossible to legally monitor bird kills even if someone had the time and ability. No one I know of is monitoring this tower at all, much less every day.

More and more legal decisions are made like this, using charged words like “public safety” as a cover to give powerful interests what they want. In this case, the plaintiffs proved that two shorter towers would provide more coverage than the tall one for not a whole lot more money, providing more actual public safety, but AT&T, and the Minnesota Court of Appeals blew them off.

Russ’s and my Congressman from the time we moved here in 1981 through 2011 was Jim Oberstar. After I spoke at one of his Town Halls in the 1980s, he and his top aide started calling me occasionally when they were facing issues with the potential to affect birds, to get my honest opinion. Sometimes, of course, Mr. Oberstar didn’t end up following my recommendation, but he always listened carefully, and I always knew that he was taking the needs of birds into serious consideration. Mr. Oberstar cared about the natural world.

Never since he left office in 2011 have I felt that the congressmen in my district, from either party, took the needs of birds, other wildlife, or the environment into account, and never since that 2012 ruling have I felt that birds, clean water and clean air, or any other elements of the natural environment can possibly get a fair hearing in a court of law when judges backed by powerful corporate interests call the shots. Corporations may be people, my friend, but they have power way greater than any flesh-and-blood people I’ve ever known.