A red fox in my neighborhood at this time of year means that in reality, there are probably two adult foxes with kits. Foxes represent a serious danger to rabbits, especially baby bunnies, and to ground-nesting birds. When a nestling crow falls from the nest, a fox can easily carry it off, but otherwise foxes don’t represent much of a threat to crows. 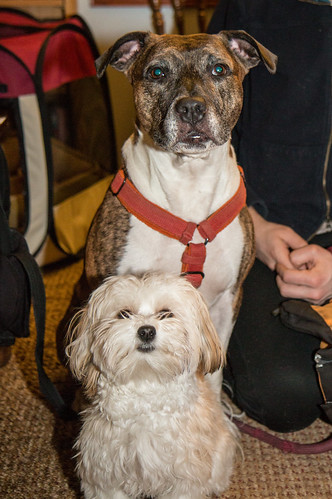 My dog Pip weighs about 8 pounds, which is roughly as much as four average crows, but only the scrawniest red foxes weigh less than her, and some weigh almost four times as much. She has a small mouth and, as a fluffy little foo-foo dog, looks about as wimpy as she actually is. So the neighborhood crows pay her no mind at all. My daughter is living with us right now, and her big, muscular dog Muxy, who weighs double what the heaviest red foxes weigh, could easily dispatch a baby or adult crow, but the crows ignore her, too, probably because there isn’t a nest in my own backyard trees and crows seem to understand that dogs stay inside fenced yards.
Regardless of the small degree of danger it poses, when the fox is anywhere around, the crows’ set our area’s Neighborhood Watch program into action. They don’t yell as loudly, and don’t call in nearly as many recruits as when a Great Horned Owl is in the neighborhood, but they clearly are yelling their concern to anyone who might be interested. If I’m paying attention when they start swearing and can see where they’re looking, the fox is easy to pick out.
Blue Jays are part of the Neighborhood Watch program, too. While they were migrating through in May and the fox was around, they were often louder, and seemed more focused and angry, than the crows. Baby jays fledge from the nest a few days before they can fly, and spend a lot of time on and near the ground, easy pickin’s for a fox. So even though adult jays are safe from foxes, they have no tolerance for them. How does screaming bloody murder at a fox before eggs are even laid help Blue Jay survival? Staying focused on potential dangers year-round probably helps ensure that jays will notice the fox when it does pose a danger, and where the neighborhood watch program is always on Red Alert, foxes may move on more quickly.
When the fox is very close to my yard, my robins make alarm calls. And every now and then following a neighborhood watch alarm, a squirrel calls long and hard—I wonder if that one had a close call.
When I notice crows and jays yelling, I often go check it out even when it’s not the huge cacawphony I hear when a Great Horned Owl is about. That’s how I got a photo of the fox in a neighbor’s yard back in March, but since then, the fox has been much too quick and alert to my presence for photographs.
I suppose my running outside whenever I hear the alert does help the Neighborhood Watch program because the fox is afraid of me. But I miss most of the drama early every morning, when the fox is most noticeably active. How can I be certain? I run my own little Neighborhood Surveillance Program. Every morning when I first wake up, sometime around 5, I take my sound recorder outside, start recording, and leave it outside. 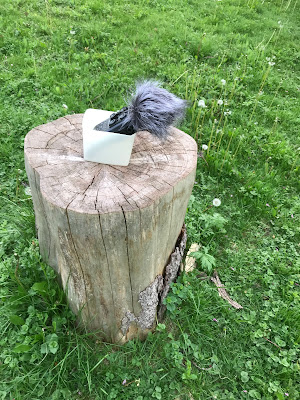 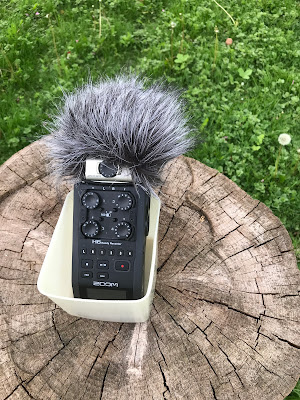 I often go back to bed, but even when I stay up, it’s mostly been too cold outside for us to have the windows open, so I don’t hear what’s going on until I listen to the recording later. Now that migration is pretty much over and most of my backyard birds have hunkered down into nesting behaviors, I can hear a lot of interesting behaviors, including their yelling at the fox. I don’t know how my birds feel about my recording them. Not one of them has signed a release form, but at least so far, not one of them has sued me for invasion of privacy.
Laura Erickson at 7:33 PM
Share