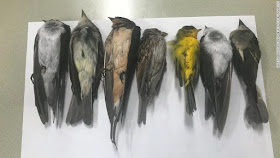 A research paper published in Science last October is still making news—in it, a group of scientists established that the total number of birds in North America has declined by about 3 billion birds since 1970, which amounts to about 29 percent of the entire bird population. And in the news this week, we are apparently in the midst of a massive die-off of western birds just since August.

Martha Desmond, a professor in New Mexico State University's department of fish, wildlife and conservation ecology, said that on August 20, a large number of dead birds were found at the US Army White Sands Missile Range and White Sands National Monument, and then more dead birds were found in regions throughout the state. She told CNN:  "It's just terrible. The number is in the six figures. Just by looking at the scope of what we're seeing, we know this is a very large event, hundreds of thousands and maybe even millions of dead birds, and we're looking at the higher end of that.” The dead birds include warblers, bluebirds, sparrows, and flycatchers, and people are reporting dead birds in Colorado, Texas, and Mexico as well.

Necropsies haven’t been done yet, so we can’t be absolutely certain what killed them. We know that the incredible fires in the West have taken an incalculable toll. Not even considering birds dying in the fires themselves, the smoke has made the air quality the worst in the world right now. It’s devastated forests, of course, but all the toxins released when houses, cars, gas stations, propane tanks, and so much else burns up has made the smoke exceptionally poisonous. People in some areas of California are right now being advised to wear masks indoors as well as out. This kind of smoke is not only killing birds directly, but also taking out prey, from insects to rodents, exacerbating the damage to birds.

The fires, starting at the time of year when dependent young were most vulnerable, would have taken a huge toll anyway; if parents and other birds over those 5 million acres were to survive at all, they’d have to hightail it out of there, breathing that toxic air and struggling to find food as they made their escape. I presume a lot of the necropsies of birds found in New Mexico will show that the birds had empty crops and stomachs, and also damaged lungs.

But the fires and the horrible dry conditions in New Mexico right now can’t be the only cause for the number of birds being found in the Southwest right now. According to Martha Desmond, “We began seeing isolated mortalities in August, so something else has been going on aside the weather events and we don't know what it is. So that in itself is really troubling.”

My new baby grandson has given me a lot to smile about in the past month. But he’s also the reason I’m growing more anxious than ever about what we are doing to our environment—this is the world we are bequeathing him. Every objective scientist who has studied the crazy weather and fire patterns and hurricanes sees the clear linkages to climate change. The only scientists denying that link are being paid to find something—anything—else to cast doubt on reality, in the exact way that Brock Turner’s defense attorney tried to find something—anything—that might cast doubt on the reality that he was sexually assaulting an unconscious Chanel Miller outside by a Stanford University fraternity dumpster until he was stopped by two Swedish men on bicycles who chased and tackled him.

Denying reality rather than facing it and making a sincere and powerful effort to right wrongs has become the toxic norm in our world, and we must end this. As Martha Desmond said about the hundreds of thousands of dead birds found just in the short time since my tiny grandson was born, “This is devastating. Climate charge is playing a role in this. We lost 3 billion birds in the US since 1970 and we've also seen a tremendous decline in insects, so an event like this is terrifying to these populations and it's devastating to see.”

It IS devastating to see, but we must look anyway. We need to actually face, with a steady gaze, the rising sea levels and heating planet and dead birds, children in cages, police crushing or suffocating or shooting the life out of human beings, men in high positions getting away with sexual assault. Without looking at any problem head on, we cannot fix it. And I’ll fight to my dying breath against this being the kind of world I leave to my baby grandson.