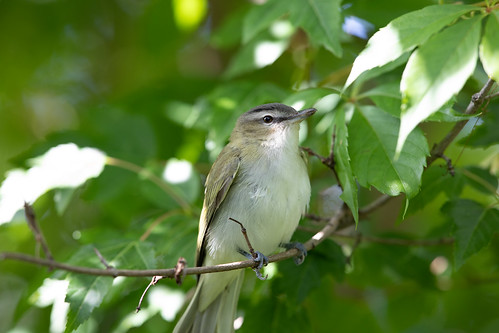 On September 7, I got an email from James Stone, who lives near Northome, Minnesota. He summed up migration in his neck of the woods:

2 1/2 weeks ago a big slug of phoebes, warblers, vireos and gnatcatchers piled in 2 nights in a row, feeding on lake hatch insects, and disappeared just as quickly when a group of adult and juvenile merlins and sharpshins showed up.  I never under-estimate the terror the bird hawks inspire.

Things have been pretty quiet since except for a movement of cedar waxwings. The last 3 days have seen small packs of blue jays, the occasional warbler and vireo, and a thrush or two.  Robins noticeably absent. Hummingbirds all gone for a week or so.

Living near Lake Superior, we see hummingbirds a bit longer than people inland. I hadn’t had an adult male Ruby-throated Hummingbird in over a week, but I did see one on September 4. I didn’t see any hummers at all on Sunday or Monday, but had a female or young hummer once on September 8, and all day on September 9 (and first thing in the morning on September 10). I’ll be keeping up my feeders at least until October this year, just in case. Ruby-throated Hummingbirds traveling through are never tempted to overwinter because of a feeder. An individual may remain for a few days or even a week or more, but that’s simply to make up the deficit in calories as the natural foods they need grow scarcer. 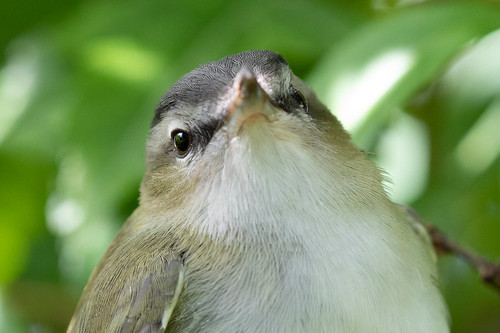 Red-eyed Vireos are still hanging out in my neighborhood, too. On the 5th, I was sitting in a lawn chair watching the activity at my birdbath when I heard something right next to me. And lo and behold, in the Juneberry shrub less than 2 feet away was a Red-eyed Vireo! This was probably a bird hatched this year because the iris was brown, not red, though a few adults never get a brilliant red eye.

I was holding the camera with my good 300-mm lens, which takes great photos but cannot focus close. I held my breath, and when the bird moved on a minute or so after I noticed it, it flew just another foot further, into a small tree by our fence. Even there I had to pull myself as far back as I could without falling over in order to focus, but I got a few nice photos. I also got fairly nice photos of a Philadelphia Vireo that morning. 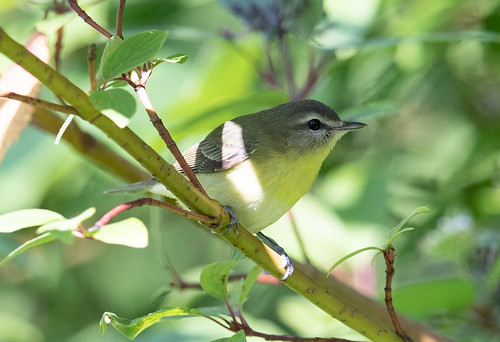 The, early that afternoon, I watched a Mourning Dove fly into the yard—the first since spring. A few hours later I went out with my dog Pip, and she found the remains of what was probably that very Mourning Dove—we’ve been getting a steady hawk migration. 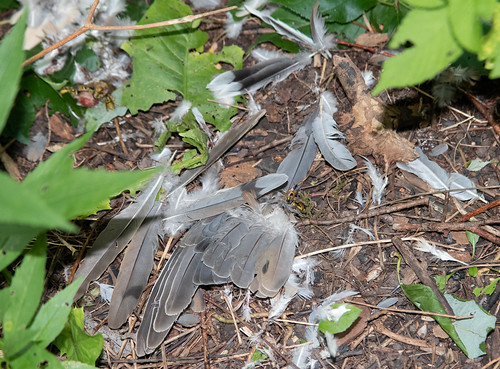 The one who got my dove was most likely a Merlin or a Sharp-shin, but an adult Peregrine flew circles over my yard for quite a while that afternoon, too, and they’re not above taking doves. The next day, I did see another Mourning Dove in the yard. 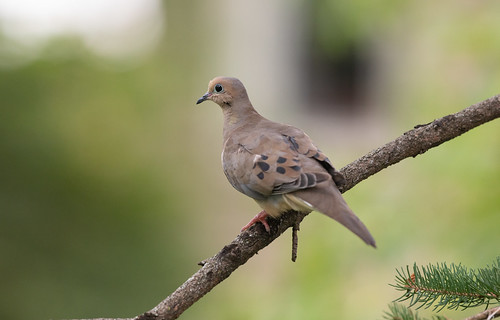 I’ve read several reports of warblers moving through along the shore and at Park Point in recent weeks. I’ve had a few in my own yard, but not nearly as many as usual, and virtually none visiting my birdbaths. But the number of White-throated Sparrows in my yard has been wonderful—at least 50 each day over the weekend, and well over a hundred in the days since. My Song Sparrows and Chipping Sparrows are still hanging around, too. I’ve been keeping my trail cams focused where some of the sparrows feed. When I’m watching them from outside with my camera, they’re all at least somewhat wary of me, making them less likely to squabble among themselves. The trail cam has caught fights but mostly feeding activity.

I put one trail cam in my tray feeder last night. Overnight, a deer mouse made it into the feeder. I don’t see how it could scale the squirrel barrier, but perhaps it jumped from the lilac bush. 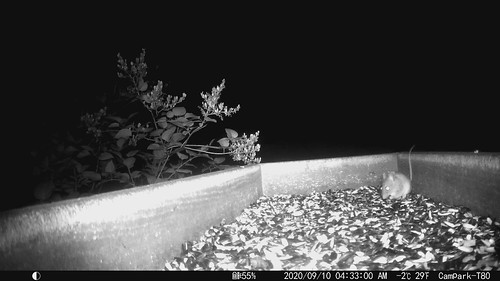 First thing in the morning, a Rose-breasted Grosbeak showed up. 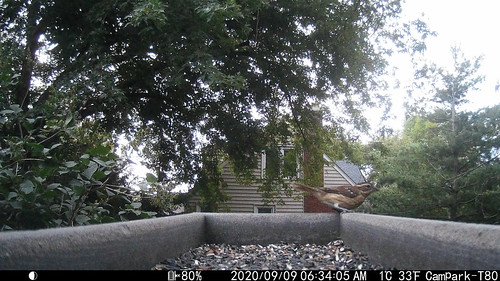 Then the Blue Jays took over. In one video, a Blue Jay is hammering away at a sunflower seed between its toes, and the moment its head came up with the kernel at the tip of its beak, another jay grabbed the seed right out of its mouth and flew away. 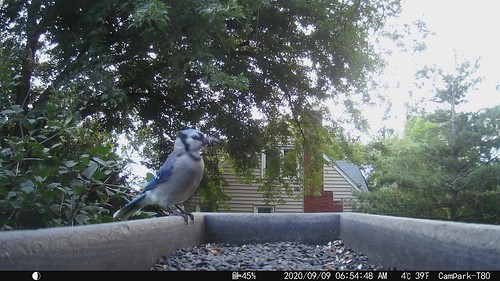 This morning, September 9, a Mississippi Kite flew right over Hawk Ridge. It was probably visible from my yard, had I been outside at the right moment looking in the right direction. We can’t see every bird that comes through even when we’re watching every moment. When we learn about the birds we missed, we’re motivated to pay closer attention, and for those of us with imagination, there’s also excitement. Imagine—a Mississippi Kite flew over my yard today! The joy of birding comes from what we do see, but I’d rather miss a good bird that others saw than not have that good bird fly over at all.

I photographed this Mississippi Kite in Oklahoma in 2013. I doubt if it's the same one who
flew over Hawk Ridge yesterday.
Laura Erickson at 2:51 PM
Share