For Our Real Life Listening Pleasure

In January 2003, my son Joe started working at Walt Disney World, and we started going to Florida every year or so. I of course had to start a Disney World bird list. I’d take photos of exotic birds in Disney’s Animal Kingdom, but on my official list, I counted only the wild birds I saw on the grounds. 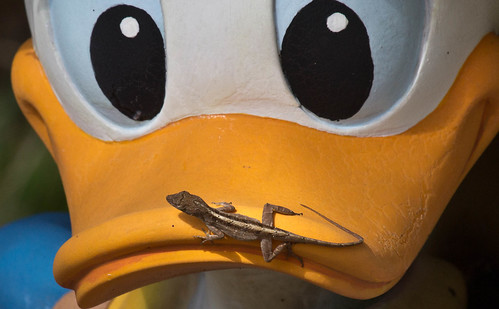 That winter or one soon after, while we were standing in the long queue to the Dinosaur ride, I was trying to identify a couple of warblers singing away when I suddenly realized they weren’t real warblers at all—just the sound of them coming from a couple of well-hidden speakers. I was shocked and distressed, even knowing this was Disney World, not the real world.

Around that time, birders were complaining about the ridiculous bird songs a TV network was using as background for golf tournaments—apparently the subtle suggestion that real birds would be singing away during a tournament helped golf fans feel complacent regarding the horrifyingly heavy applications of water, fertilizer, and pesticide on golf courses. When I did a program specifically about that back then, I heard from a radio listener who was most seriously displeased with me. She told me golf was her only form of relaxation from her high-powered job, and I had no right to dampen her joy. But her joy is hardly my concern. I don’t advocate for people with high-powered jobs. I advocate for birds, pure and simple.

Anyway, I’ve been thinking a lot about how we humans enjoy hearing bird songs because lately I’ve been playing recordings of bird songs for my baby grandson. He’s not quite five months old, so he’s far from being verbal, but he definitely seems to enjoy hearing them. I’ve been wondering if bird songs so out of context—I recorded them right here in our backyard, but during May and June, not December or January—could end up confusing him, but decided he can figure out about bird song contexts when he’s a bit older.

It seems intuitively obvious that people benefit from hearing bird song, and last month researchers from California Polytechnic State University published a study in the Proceedings of the Royal Society B analyzing just how much natural sounds affect people’s sense of well-being.

The study was conducted in the City of Boulder, Colorado’s Open Space and Mountain Parks. The researchers placed 10 hidden, evenly spaced speakers on two sections of trails, and played recorded songs from 11 species of birds including American robins, house finches, and black-capped chickadees from July 15 to September 4, 2017. The speakers were placed in realistic microhabitats for each species in order to be authentic. For example, the speaker broadcasting the song of the spotted towhee was placed near the ground in shrubs where the bird is most often found.

The researchers alternated playing the birdsong for a few hours a day for a week, and then turned off the speakers for a week at a time. They interviewed hikers after they passed through the sections with the speakers, and found that the “phantom chorus” of birds singing increased hiker’s sense of well-being, at least in those protected natural areas.

I wish they’d also asked the hikers if they were birders, to see if there was a difference between birders and non-birders here. I know if I were hearing those sounds, I’d be searching for the actual birds, and would find it frustrating if they were nowhere to be found. And because I’d be searching, I might locate the hidden speakers, and would feel even more betrayed and upset than I did at Disney World, where I expect everything to be fake.

The comments following one news report of the study were pretty much about what a great idea it would be to pipe in bird songs in urban and park areas of cities and suburbs. That filled me with sorrow. To me, the logical conclusion was that we need to make the urban environment healthier so more birds thrive there—not to foster complacency by providing a fake auditory sense of what is natural. I want my little grandson to be able to find as many real-life birds when he grows up as I've been able to enjoy myself.