Looking for the Special Ones 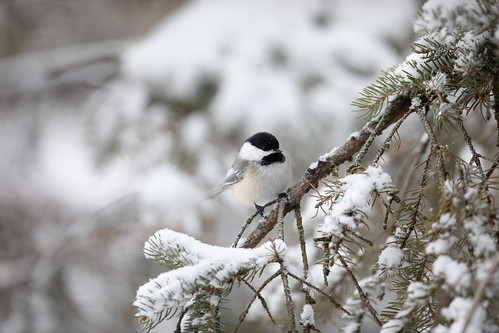 During this seemingly endless period of nights of double-digit subzero temperatures, I’ve been waking each morning in some dread of what I’ll see at my bird feeders—or, rather, who I may not see. I have roughly 15 chickadees visiting every day. They’re very tricky to count because they don’t sit near one another, and I’m not sure I’d notice if one were missing in the morning. When chickadees don’t make it through the night, we don’t find their little bodies because they each sleep in their own tiny cavity, hidden from us and even from one another. I have several Red-breasted Nuthatches and Downy Woodpeckers, and so as long as I see at least one of both sexes, I’m not sure if I’d notice losing one of them, too. I have a male and female White-breasted Nuthatch, and I’m not happy in the morning until I’ve seen both. 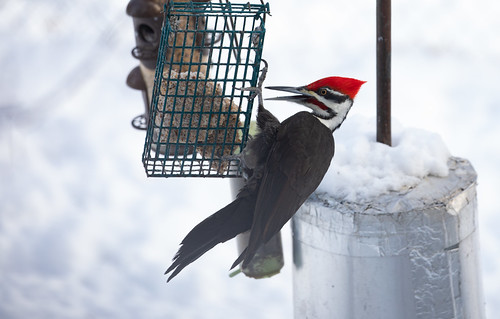 I haven’t seen my Pileated Woodpeckers since before the cold spell settled in, but they weren’t coming very often before, so I don’t know what to think now. My Red-bellied Woodpecker, a female, had been coming every three or four days, but now I haven’t seen her in over a week—just once at the beginning of this horrible cold spell. I don’t know if it’s time to mourn her or not. 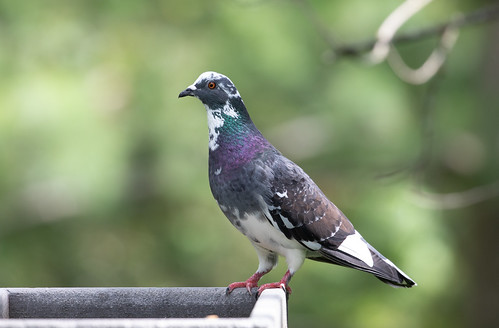 I know I’m not supposed to feed pigeons, and I wish our neighborhood had fewer, but I’m very attached to one female I call Bernice. She’d been coming daily for many months, but suddenly disappeared for several days—indeed, where I’d regularly been seeing four each day, suddenly only one was showing up—but Bernice turned up in my yard on February 16, and I was inordinately pleased.

The unprecedented cold spell is killing a lot of birds in Texas, Oklahoma, Kansas, and other states, and I’m sure that the overall warming trend in recent decades exacerbated the horrible effect on birds. We had long spates of temps below zero up here before this, and occasional cold spells in southern states as well—temps were down to at least 20º when Russ and I camped in the Rio Grande Valley in Texas back in December 1978, for example. It was the survivors of those occasional cold spells whose genes got passed to the next generation, but in recent years the fittest birds haven’t needed to survive frigid weather down there. Come spring, the numbers of birds returning from Central and South America won’t be affected, but it’s possible we will see a drop in shorter-distance migrants, from robins, Blue Jays, and Yellow-bellied Sapsuckers to phoebes and Tree Swallows.

There’s one individual bird I look forward to every year even though I’ve never ever seen her and have only seen individuals of her species once in my life. Wisdom the Laysan Albatross, the oldest known wild bird as well as the only wild bird known to be older than me, returned to Midway Island on November 29. Wisdom was banded as a nesting adult in 1956, which makes her an absolute minimum of 70 years old now. I’m pushing 70 myself but won’t hit that milestone until November.

The U.S. Fish and Wildlife Service has had plenty of difficulties with the pandemic this year, so word that she’d returned didn’t get out until over a week later, and I was starting to feel a bit frantic. But BirdWatching magazine’s wonderful website broke the news not only that she’d arrived, but that she’d laid an egg again. Last year, Wisdom didn’t nest—albatrosses often take a year’s break between nestings, but it’s cool, and even amazing, that she laid an egg again this year. And even cooler, last week BirdWatching broke the news that the egg hatched on February 1. Yep, a bird older than me is once again raising a baby.

Wisdom was originally banded lo those many years ago by a man I not only was lucky enough to have personally known but who I considered my true North Star, Chandler Robbins. Robbins died on the first day of spring in 2017, but somehow hearing about Wisdom each year brings him back to life for a moment, since Robbins was not just Wisdom’s bander but her literal savior—when the Department of Defense decided to start bringing jet aircraft to the temporarily decommissioned airport on Midway Island, Chandler Robbins spearheaded the effort to find a way for those jets to safely take off and land while giving space to the albatrosses as well.  The original plan had been for the Department of Defense to kill every albatross on the island! 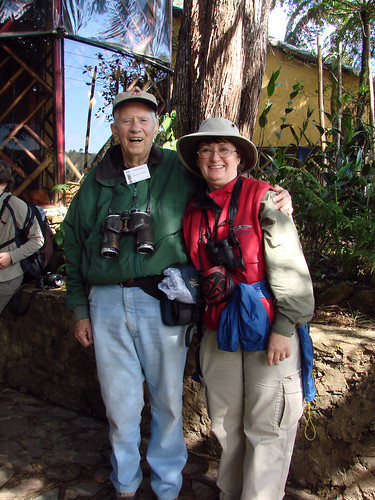 There will come a year when Wisdom doesn’t return to Midway Island. But she’s done her part—a part Chandler Robbins made possible—by producing dozens of chicks over her long life. Amazingly, inspiringly, and wonderfully, in 2021 she’s done it yet again. And despite all the other bad news that seems to be closing in on us, that makes me very happy.