Anniversary of the Day After

Today, March 3, 2021, is the 46th anniversary of the first day I ever woke up already having a lifelist.  Sure, it had just one species on it—the Black-capped Chickadee that I’d seen for the first time the day before—but that meant that now whenever I set out on another birding adventure, there'd always be a chance that I'd be greeted by an old friend!

I was lucky that the few people I talked to that spring who knew how to identify birds appreciated chickadees—no one made me feel stupid or ignorant when I blathered on and on as I discovered these little mites doing cool things. Who knew a bird could grasp on the tip of a branch upside down to get food? Who knew a wild bird would fly near a strange person and actually meet their eyes? Who knew a bird could make so many different sounds, from a raspy chick-a-dee-dee-dee to a lovely whistled hey, sweetie? When a chickadee was near, I took the time to study it—to scrutinize the soft, buffy sides, the white edges to the flight feathers, the size of the black bib; and to listen carefully to every call note and song—in hopes that I’d be able to see and hear the difference when I eventually traveled far enough south to see Carolina Chickadees.

I was lucky that my first bird was so common and frequented so many habitats. I saw and heard chickadees practically every day through March and April, and loved the feeling of growing familiarity—the sense that if I paid attention, I was almost guaranteed to find at least one wherever I went and that I would recognize it without needing to double check in my field guide. Little by little, some other birds joined the chickadee as birds I recognized after barely a glance or after just hearing a note or two. But some other birds were SO much trickier to find and figure out, sometimes even after having already identified them a few times before. I could count on chickadees to be not just easy to recognize but also fun.

By May, I still wasn’t taking chickadees for granted, which turned out to be a very lucky thing. Who knew that chickadee flocks were like little welcoming committees showing warblers where to find food and water and warning them about the local dangers? Now when I looked for chickadees, I started picking out warblers in the same trees and shrubs.

Russ and I were students at Michigan State at the time. I planned to be a teacher, and he wanted to be a scientist working on water pollution issues. I could be a teacher anywhere, while opportunities were more limited for him. I told him I’d be happy to follow wherever he went, but I hoped we'd stay within the range of Black-capped Chickadees. That wasn’t too restrictive—they’re found across the continent as far south as Pennsylvania and the northern tip of California, and even further south into the Rockies and Appalachians. I don’t know if he even remembers that old request—since leaving Lansing, we’ve only lived in Madison, Wisconsin, for five years and then up here in Duluth for lo these 40 years.

And in all this time, chickadees have never disappointed me. During this pandemic, I had an amazing amount of luck with backyard birds all last spring, summer, and fall, making recordings and photographing a lot of individual birds of a lot of species. This winter has been very disappointing as far as bird numbers go—it’s been a big year for finches in many places, but I haven’t had any at my feeders since fall. Even my local Blue Jays, which I thought would stick around all winter, are missing in action. I hear one every few weeks, but the calls are always coming from somewhere else, and only when crows are yelling that the neighborhood Great Horned Owl is somewhere near here.

But I don't feel bereft. I’ve happily kept my feeders filled because first thing every morning, whether it's 20 below zero or twenty above, my chickadees are here to greet me. They’re the birds my baby grandson gets to see coming and going from my window feeder, and his 6-month-old eyes seem every bit as delighted in chickadees as my 23-year-old eyes were when I first beheld them so many years ago. And that baby’s delight fills me with a kind of joy I wish everyone could feel. And it’s all because 46 years ago today, I woke up with the Black-capped Chickadee on my lifelist. 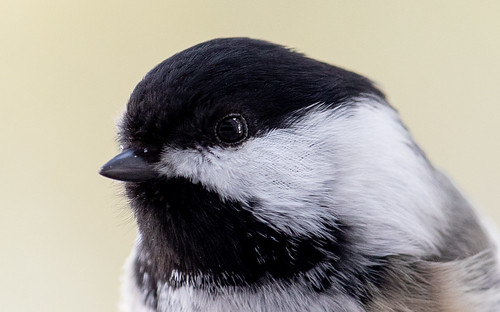