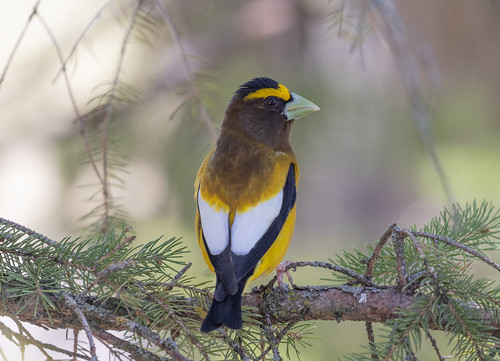 When Russ moved into our house on Peabody Street in July 1981, even as we were carrying the first boxes into the house, I started my yard list with a Bald Eagle flying over and Evening Grosbeaks calling from our trees. Russ put up our first bird feeder later that day or the next, and soon we were going through at least 50 pounds of sunflower seeds every week, sometimes 100, almost all of it devoured by grosbeaks. Of course, it wasn’t the feeders that drew them to Peabody Street in the first place—they were already there. The reason they’d settled in our neighborhood was our boxelder trees—my own yard had three.

One of the boxelders, right next to our house, looked decrepit enough that my mother-in-law took one look and said we needed to have that one taken down as soon as possible. Forty years later, we still haven’t quite gotten around to that. Over the years, chickadees and Red-breasted Nuthatches have nested in it, I don’t know how many baby squirrels have been born in it, and I’ve gotten many of my best photos of birds, ranging from Ruby-throated Hummingbirds to Pileated Woodpeckers, in that tree. 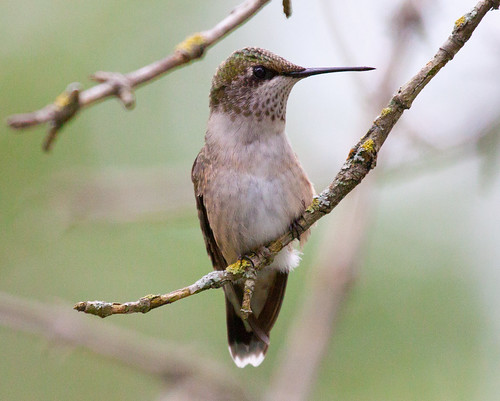 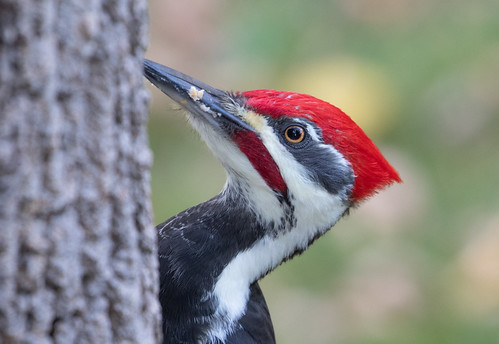 Even as the branches continue to bud out every year, they’re increasingly covered with lichens, adding color and texture to the photos. The tree will eventually topple, with luck giving us enough warning that we can be a little proactive, but meanwhile it’s given us immeasurable pleasure. And it’s not only still standing—it’s still producing plenty of seeds every summer. When Evening Grosbeaks were abundant here, they spent a great deal of time in that tree. 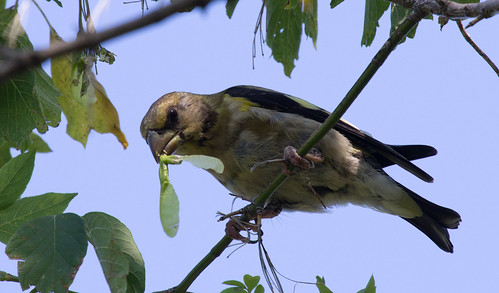 As much as I’ve always loved chickadees, if any bird defined our lives on Peabody Street back in the 80s and early 90s, it was Evening Grosbeaks. They vocalized almost constantly from sunrise until sunset, and when they weren’t at the feeders, were up in the trees, calling almost constantly.

I grew up about a mile from O’Hare Airport, right under a flight path. When we were little, jet aircraft were rare, but by the time I was in fifth or sixth grade, not only were we dealing with frequent jets but also, for a few years, an occasional sonic boom. Without even thinking about it, we’d stop talking mid-sentence as a jet got loud and resume without missing a beat when it had passed over. The constant sound of Evening Grosbeaks wasn’t intrusive like that—we didn’t have to raise our voices or close the windows to listen to music or watch TV—it was simply and always there. If Evening Grosbeak calls were relentless, they were also pleasing in a way that urban noises are not.

Evening Grosbeak calls were such a constant element in the soundtrack of our daily lives when we first lived in Duluth that we took them for granted. When their numbers dropped and then they disappeared, they left a gaping hole—a vacuum as noticeable and disturbing as if the string section suddenly vanished in the middle of a symphony. 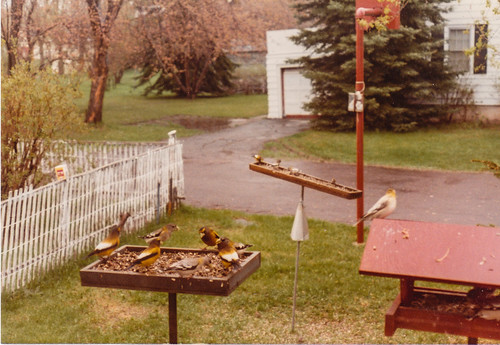 Ten years ago, in August 2011, 15 or so years after the grosbeaks had pretty much disappeared, Russ had surgery. His first night home from the hospital was miserable, but first thing the next morning, we woke up to a wondrously soothing sound—Evening Grosbeaks! Sixteen individuals of I think three family units turned up in our yard and stuck around for several weeks. They pigged out at our feeders and spent a lot of time at our birdbaths and our neighbor’s little backyard pond, loafing around and getting most of their nutrition up in the boxelders. Birders from throughout the state came to see them—many had started birding when grosbeaks were rare here, a few flocks still visiting specific feeding stations at the Sax-Zim Bog and other wild places in winter, but hard to see, much less so easily enjoy, in summer. It felt wonderful to have them for a time, but one September day they moved on and never returned. 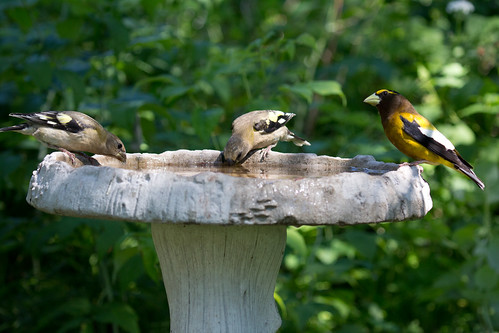 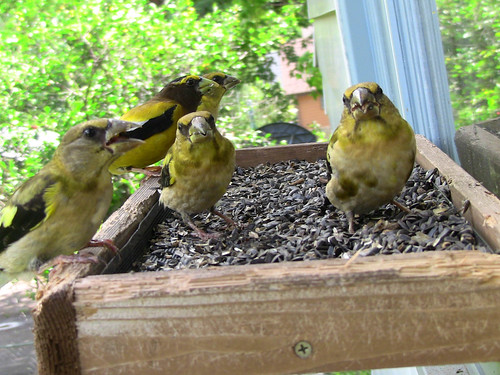 Last fall began what is called an “irruption,” and suddenly people in many parts of the country were seeing Evening Grosbeaks. Not me—I had just one or two flyovers in the fall, and that was that. Russ and I went to the Sax-Zim Bog to see them this winter. Then, on April 7, one showed up in my yard and I saw two for the next two days, but they moved on. Then on April 23, my friend Dudley Edmondson, who lives a few blocks west of me, told me he’d been seeing a large flock of Evening Grosbeaks in his part of the neighborhood for a week. I’d not seen any, and my morning recordings hadn’t picked up any—I was bummed out! 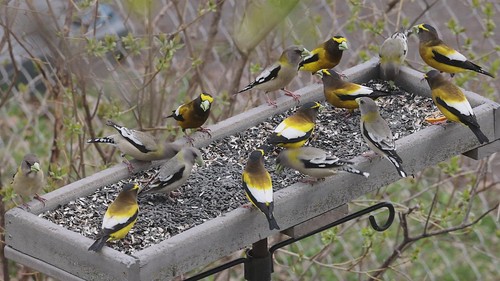 But two days later, a dozen showed up in my yard, on the 27th I had an amazing 250, most flying over, and my yard hosted at least 50 every day since then. Early yesterday morning, May 3, 100 Evening Grosbeaks filled my trees and feeders and bird baths. I’d started making a morning sound recording at exactly 4:59, and the first one called at exactly 5:52—the sound grew to an amazing cacophony. But it may have been their last hurrah. By 9 am, the vast majority of them had vanished. Only a handful spent any time in my feeders after 9, and though I could still hear a few up in the trees, even that sound dwindled to nothing by late afternoon. I’d gotten used to seeing them in the feeders before dusk, but not one showed up. Erik Bruhnke told me he saw 80–90 moving over the Superior Hiking Trail near the Hawk Ridge main overlook about 12:30. Grosbeaks were on the move. 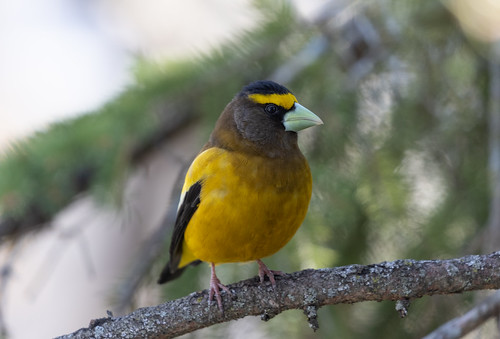 Some people believe that the huge numbers we enjoyed in the 80s weren’t the norm. They think the birds appeared in numbers during an exceptional invasion year in the 70s and stuck around until the late 80s or early 90s. This year was also an exceptional invasion year. If those ornithologists’ speculations are right, it’s possible Evening Grosbeaks will be easier to find in northern Minnesota in the coming years. Time will tell.

That line, “don’t it always seem to go that you don’t know what you’ve got till it’s gone” was true for the Evening Grosbeaks here long ago. However long they stay this time—or even if they’ve already moved on—I’m thrilled that a sound so mingled with my children’s early days is now part of the soundtrack for my baby grandson. This time around there’s no taking them for granted. I’ve made at least 15 hours of recordings of them, some published on the Evening Grosbeak page on my website. Even as I’m looking forward to orioles and wrens and Rose-breasted Grosbeaks and Brown Thrashers joining in the dawn chorus in the coming days, I’ll be treasuring the memory of these Evening Grosbeaks, and my recordings of them, for the rest of my life. 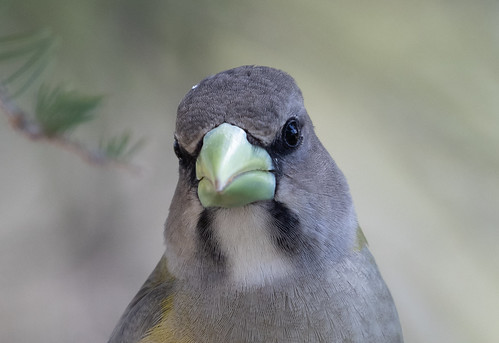 P.S. After I wrote this and recorded the corresponding podcast, I took off my headphones and WHOA! They're back, at least as of 6:30 May 4!
Laura Erickson at 7:06 AM
Share
‹
›
Home
View web version