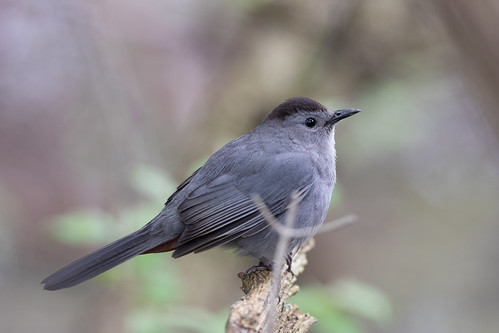 On Saturday I was telling my husband how hard it would be to come up with a Top Ten, or even a Top Twenty, list of my favorite birds. I recounted a bunch of favorites off the top of my head, but then on Sunday morning, a catbird proved my point. I hadn’t even thought to include catbirds with my favorites, but one singing in the shrubs next to my front porch (listen to it here) made me remember so many splendid encounters with catbirds over the years. Was my favorite the very first one I ever saw, putting the species on my lifelist? That one was mewing in some dense shrubbery on the Michigan State campus, sounding very cat-like but somehow not a cat. Without ever having heard one before, I knew it had to be a Gray Catbird. I searched through the thick foliage, and voila! That most cooperative bird not only let me see his solid gray plumage with distinctive black cap and long, black tail, but also his one splash of color—the deep rusty crissum, or undertail coverts where the belly meets the underside of the tail. Unfortunately, that was May 11, 1975, the same day I saw my first warblers, which I’m afraid eclipsed the poor catbird.

Throughout that spring I got good at recognizing not just the mews but the catbird’s song—a long string of imitations and cool notes, given at what seems like a leisurely pace yet managing to sound energetic and vibrant. Catbirds may not top the color charts, but their large, innocent eyes, so black against that soft gray face, and their slender form give them an elegant loveliness. 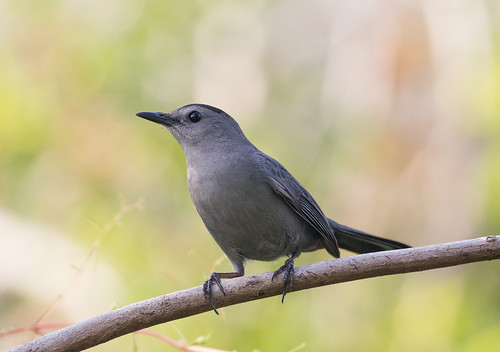 Catbirds usually nest fairly low in tangles of dense shrubbery, but manage better than most birds to duck in when no one is watching. Many times in autumn after leaves are gone I’ve found a catbird nest where I’d had no clue that they were nesting. Cowbirds are much better at finding their nests than we mere humans are, but catbirds are one of the few birds that recognize cowbird eggs and eject them from the nest.

Soon after I moved to Duluth, I met Koni Sundquist, who seemed to know everything about every kind of bird. She’s the one who told me about setting out jelly for orioles and catbirds. Catbirds are just as likely to nest in yards with no feeders as ones offering grape jelly. They eat plenty of insects as well as berries and other fruits, and they feed their nestlings a protein-rich diet based on insects, so they thrive in yards that enjoy benign neglect, especially regarding pesticides. But the easiest way to see them out in the open is with jelly feeders.

When my daughter Katie was three, she went to half-day Montessori preschool. When the weather finally got pleasant in the spring, she always wanted to have what she called pic-i-nic lunches. She liked eating out there alone, so I’d go back in with her baby brother, but after a few days, she told me she had a new special friend who liked eating pic-i-nic lunches with her. He wasn’t exactly invisible, but wouldn’t come anywhere near unless Katie was alone. He’d be nowhere in sight when I set Katie up with a sandwich, fruit, and a glass of milk in the middle of the picnic table. I’d retreat indoors and peek out the window, and sure enough, Katie’s friend would fly in, straight for the orange bowl of grape jelly in the corner of the picnic table.

Through the end of May and throughout June into July, Katie’s little friend would fly in as soon as she was settled at the picnic table and I’d gone inside. This little catbird and my little daughter seemed to be having a most companionable pic-i-nic lunch. I always wondered why that catbird was not scared of Katie, and even more puzzled that it so consistently flew in the moment she settled at the picnic table and I'd disappeared. Whenever I hear the expression “in the catbird’s seat,” I always think of Katie and her catbird friend dining together on our pic-i-nic table. Of course there must be a catbird seated on my Top Ten List Favorite Birds.

(You can hear a few recordings of my most cooperative catbird, singing very close to my microphone, on my Gray Catbird page. I have species pages for most birds, and if I have any recordings, they will show up.) 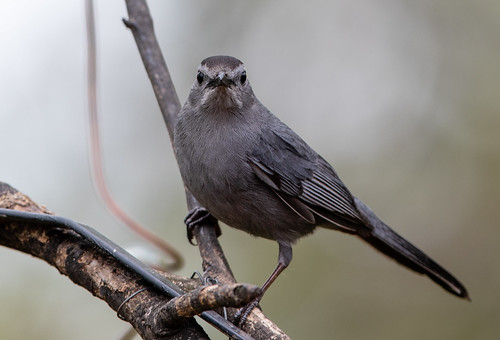