The Price of Getting Older

As someone who has already been given more years on this planet than my grandmother, father, godfather, older brother, or younger sister were given, I feel very lucky to be pushing 70. But getting older comes with a cost—my senses are just not what they used to be.

This is hitting home a lot right now on both the auditory and visual fronts. I set out my sound recorder every morning to capture the dawn chorus. When I listen with headphones on the computer, my software shows the spectrograph and waveform graph as I listen. I don’t miss anything in the low- and mid-frequency range, but the spectrograph shows a lot of high-frequency sounds my ears simply cannot pick out. 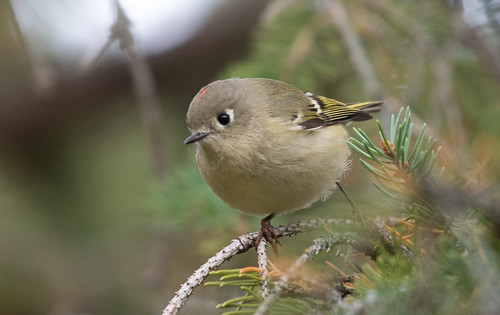 This week, Ruby-crowned Kinglets have been singing away. I don’t have any trouble picking out the rich warble at the end of their 3-part song, and I can often hear the higher-frequency middle part. But the song starts out with some very high notes which I always used to be able to hear but cannot pick out anymore, though the spectrograph clearly shows that the birds are still singing those notes. The high-pitched sounds I do hear sound much quieter to my ears than they really are—I can see that in the intensity of color on the spectrograph and in a more straightforward way because the waveform graphs the actual volume.

It wasn’t until a kind listener of For the Birds told me a few years ago that the bird sounds at the beginning and end of the program were too loud that I realized I could no longer trust my ears to match the volumes of bird songs to my voice to produce this program. Now I have to trust technology to match the levels.

My hearing aids help a lot, but they can’t make my ears young again. My hearing officially sucks, but ever since I had my cataract surgery at the end of 2019, my vision is much better than it was for decades. I see distant details much better, and colors are much more vivid and true. So what’s the problem with that?

In the past few months, I’ve been going through photos I took during my 2013 Big Year. That year was so intense that I never had time to properly vet the photos, usually just pulling out three or four of the hundreds I’d taken that day to post on my blog. Reliving that wonderful year via photos is joyful, except it’s hitting me that many of the photos I did pull out to post on my webpage in 2013 are over-processed. Without my having any idea of it, my cataracts were so dulling my vision and giving everything a slightly yellowish-brown cast that I was making the colors a little too saturated and the contrast a little too high, in the same way that, before cataract surgery became common, many older women used to tint their hair blue because their cataracts made their white hair look dingy and yellowish. My camera was doing a much better job at capturing true-to-life colors than my cataract-clouded eyes were.

At every age, we humans seem to think we know more than people of other ages. I remember when I was a young birder not so much dismissing older birders but certainly not trusting their skills because they needed so much help to see Le Conte’s Sparrows or Blackburnian Warblers that were so easy for me to hear and find. But back then, I didn’t have the experience I do now helping me recognize regional dialects and subtleties of call notes that I didn’t have a clue about back then—I wonder how many things those older birders knew that I’ve still never figured out.

It’s unfair that the more experience we have, the less our senses can actually experience what we know, and as much as I love my hearing aids, they can’t restore my hearing the way cataract surgery restored my vision. But then I think about how bird eyes can see a much wider spectrum than even the youngest, most acute human eyes can, and bird ears can hear a wider frequency range, and I don’t whine about that. My mind’s ears can still "hear" some high notes when I see them on the spectrograph, and when I’m puzzled about a sound I can see but not hear on one of my recordings, I pester a couple of young birding  friends to help me figure it out. If losing a bit of my hearing is the price of pushing 70, when I wake up to yet another new beautiful dawn on this lovely planet, I know it’s worth it.