Dogged Birding after the Dog Days of Summer

It’s still hot out there, but the dog days of summer officially ended on August 11. The period from July 3 through then was when the Sun appeared in the same region of the sky as Sirius, nicknamed the Dog Star. Yep, technically, the dog days are defined celestially, not by how the hottest time of year makes even the peppiest dogs slow down.

My little dog Pip doesn’t enjoy hot days, but she’s not as badly affected by heat as my daughter’s big bull terrier Muxy, who was always stressed by heat and now is getting old. When Katie and Michael tried taking her along on a slow, easy walk with their baby on a day in the low-80s with low humidity, they ended up calling us to come and pick up her in the car. Poor Muxy has clearly not noticed that the dog days have been over for several days—she’s still languishing.

Like the dog days of summer, autumn is technically a celestially-defined period—the time between the autumnal equinox and the winter solstice which this year runs between September 22 and December 21. Birds pay far more attention to the night sky than Pip or Muxy or most people do—many nocturnal migrants use the pattern of the stars, and especially the location of Polaris in the sky, to orient and navigate toward their winter destination. But birds have no use whatsoever for human-imposed definitions of the seasons. Indeed, the concept of four seasons of almost exactly equal lengths would be preposterous to birds. In the avian world, the number of seasons in a year varies enormously by species. Sometimes even the age and sex of birds belonging to the same species determine their annual rhythms.

By mid-July, shorebirds had already begun migrating south, especially some adult females. In the far north, where days around the Solstice are so very long but the warmish season is supposed to be so very short, bird pairs even out the division of labor between parents by giving the male most of the parental care duties so the female, her body depleted by egg production, can take some time off to recover. In some shorebird species such as phalaropes, the females don’t even incubate the eggs—it’s the males with the incubation patches. Right now, lots of shorebirds are passing through the Northland and even the central states.

But shorebirds are not the only birds on the move now. On August 13, I heard from James Stone, who for years has been keeping me up to date with interesting bird sightings in his neck of the woods around Northome. He writes:

Laura—the warblers and vireos started showing up in little packs about a week ago.  Big group today—lots or red-eyes and a mix of everything else, feeding on the lake insect hatches and having honeysuckle berries for dessert. I’m guessing they got north pretty early, and they’re a little early packing their bags.

I’ve been seeing a few early migrants in my own backyard, too, including a small handful of warblers and Red-eyed Vireos. For some reason, one or two Yellow-bellied Flycatchers seem to show up in my backyard every spring and fall, snapping up insects in the back of my yard. My backyard habitat is completely different from the Yellow-bellied Flycatcher's breeding habitat, so most of my photos show them in typical backyard vegetation rather than in the boggy coniferous forest where books and radio birdwatchers like me tell people they belong. That’s the thing about migration—how could a Yellow-bellied Flycatcher possibly get from those boreal coniferous forests and peatlands to its wintering grounds in Mexico and Central America if it could only feed in boreal forest vegetation? It’s not like it can just pull out a communicator and tell Scotty to beam it directly to its wintering grounds. Yellow-bellied Flycatchers have one of the shortest stays in their breeding habitat of any of our Neotropical migrant songbirds, often arriving, nesting, raising young, and heading out of the northern forest in fewer than 70 days, which is why my backyard photos of them are all dated from late May and then August—they are mostly gone by Labor Day.

I’ve not seen any flycatchers in my birdbaths, nor vireos, but thrushes, flickers, Pileated Woodpeckers, and even treetop warblers come down to birdbaths to drink. 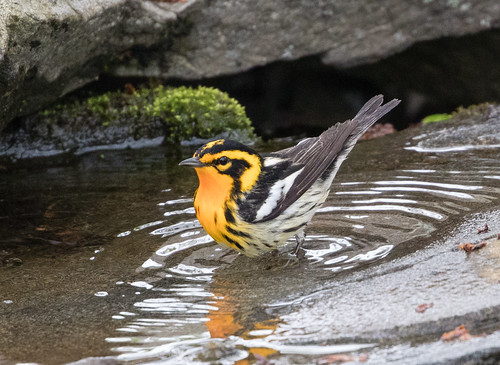 During this infernal drought, my birdbaths will be more important than usual for migrating birds. And as James Stone notes, natural bodies of water, from lakes to creeks, provide lots of insect food and fruit trees provide carbs and vitamins, as well as other kinds of insects. The simplest way to enjoy the passing parade of fall birds in your neck of the woods, however those individual birds are defining their fall season, is to park yourself near a birdbath, fruiting trees or shrubs, or a shoreline and watch for movement. Keep looking up, too—nighthawks should start coursing through any day now, and a few hawks are already on the move. Frank Nicoletti even reported a Swallow-tailed Kite north of Duluth a few days ago. Migration is like a box of chocolates—you never know what you’re going to get, but it’s certain to be sweet. 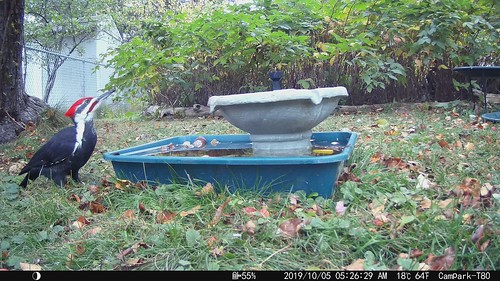