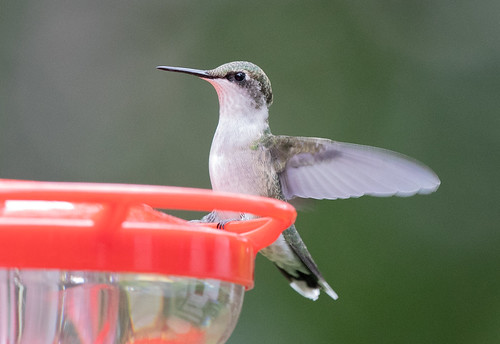 My backyard is still buzzing with hummingbird activity, but I haven’t seen an adult male in two days, and numbers of adult females and young birds are starting to wane.

The peak of hummingbird migration coincides with hurricane season, and as Ida bears down on the Gulf Coast precisely where our Ruby-throated Hummingbirds are collecting en route to Mexico, my anxiety is growing. I keep reminding myself that hummingbirds have been using this route for millennia, and even as I realize how climate change is changing everything, making storms, floods, and droughts on average both more frequent and more severe, these tiny little birds really are powerhouses. Many will succumb, but we oh-so-intelligent humans are supposed to take the long view, that the ones who do survive have the genetic makeup to make their own descendants more likely to survive these and even worse conditions. I try to remember that, but my binoculars focus on individuals, not populations.

I never get to find out what becomes of the individual hummingbirds I interact with—the ones who let me photograph them, the ones who rest in the box elder twigs near my office window and give me so many splendid photo ops. Some hummingbirds over the years recognized me and knew how to catch my attention to fill the feeders. My favorite of all was a female Ruby-throat who would tap at my window to get my attention when wasps were giving her trouble. I’d crank open the window and lean out with my hand vacuum cleaner to suck up all the yellow jackets in and near the feeder while she hovered just a few inches away, trusting that I’d never turn that noisy machine on her. That was in 2004, before I was taking many photos. I often wondered if she had to deal with Hurricane Katrina.

Fortunately for my mental health, a bit of fascinating news about a hummingbird research project , about a species that won't be affected by Ida, was just released, distracting me for a bit. It’s about a gorgeous tropical hummingbird, the White-necked Jacobin, which I’ve had the wonderful pleasure of seeing, over the years, in Costa Rica, Panama, Trinidad, Peru, and Ecuador. The adult males have a glittering brilliant blue head and breast, bright, iridescent green back and wings, and a flashy white nape and tail. Most adult females—about 80 percent—have much duller brownish green feathers.

But oddly enough, juvenile jacobins of both sexes are brilliant like the males! And even more oddly, about 20 percent of adult females retain that male-like plumage throughout their lives.

Scientists collecting museum specimens have long known that when they skinned hummingbirds of some species, a small number of specimens that appeared on the outside to be males had, on the inside, ovaries rather than testes. Why this was and how those odd female birds interacted with other hummingbirds was extremely puzzling but hadn’t been studied until scientists at the Cornell Lab of Ornithology and the Smithsonian Tropical Research Institute set to work. The lead scientist on this project, Jay Falk, made this his Ph.D. research for Cornell.

The researchers set out many feeders with RFID readers, where they placed taxidermy mounts of juvenile and adult jacobins of both sexes and both plumage-types., and they recorded how many approaches by the marked live jacobins to those stuffed mounts were sexual and how many were aggressive. 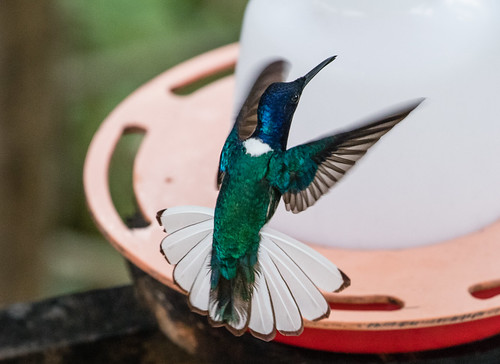 Hummingbirds don’t form pair bonds—females have all the nest-building, egg laying, incubation, and childcare responsibilities. Scientists have always attributed the extreme sexual dimorphism in hummingbirds—those brilliant feathers on males and duller feathers on females—to sexual selection. They assumed that males compete with other males for the brightest plumage to attract the most females, and females bear dull plumage as camouflage during their nesting activities, but apparently the reality is more complex. The researchers observed and video-recorded females in the male-type plumage nesting successfully, so even though the study showed that given a choice, males preferred to mate with females in dull plumage, females in bright plumage were still successful in reproducing. They may have lost a bit of an edge in attracting males, but they had a real advantage when feeding, particularly at very busy feeding stations, where the brighter females visited feeders both significantly more frequently and for longer durations than the duller females. So both plumage types have an advantage for adult females, and evolution has kept both types alive, just as in our American Robins, males that are predisposed to migrate early have an advantage in years with early springs, while those that migrate later have the advantage in years with late winter storms.

A lot of the news media headlined the story emphasizing that these females in male-type plumage had found a strategy to dispense with sexual harassment. If only human females could find such a simple solution! 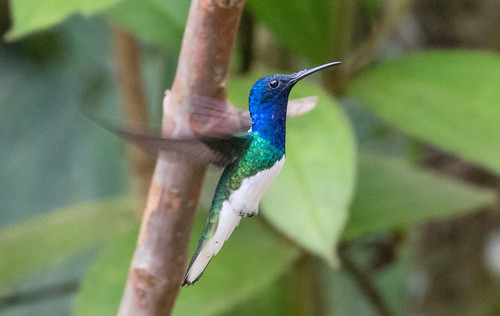