How I know that "my" hummer is a Rufous, and why it's important 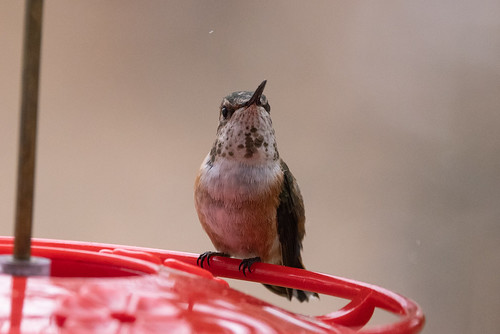 Recognizing birds is an essential skill for a birder, and as the author of the American Birding Association’s Field Guide to the Birds of Minnesota, I’m supposed to be an actual authority on bird identification. 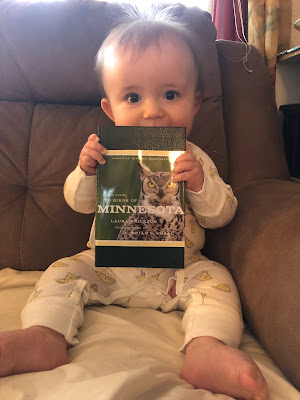 But important as recognizing birds is, it’s never been my primary interest. When I was a teacher, recognizing my students was essential, too, but hardly the point. On the first day of school, back in the days when 1-hour film development was a new thing, I’d bring my Olympus camera, loaded with a new roll of film, take a picture of each child, get them developed after school, and take the photos home to construct an identification guide for each class.

In the classroom, the official range map—my seating chart—was very helpful, but in the same way that individual birds can sometimes be found out of range, occasionally a couple of kids would swap seats to try to throw me off. I couldn’t focus on a lot of elements of plumage—whatever a child was wearing in the first photo was bound to be different the very next day. Through the first week, I’d add helpful “field marks”—especially vocalizations and behavior—to cement my memory of each child. But as with bird identification guides, my field guides to my students quickly became extraneous as we fell into a new year of math or science or reading or music.

At this point, the birds I find in Duluth are usually ones I recognize as easily as I recognized my students a few weeks after school started. But now and then, even today, I need to focus on identification, cracking out field guides and even more specialized resources. 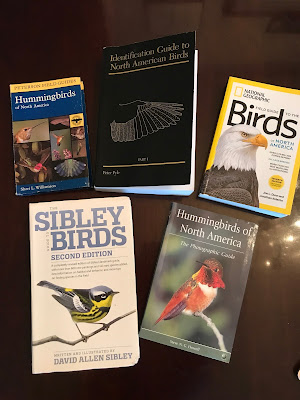 The hummingbird coming to my feeder right now is a case in point. The vast majority of hummingbirds appearing anywhere in the eastern United States are Ruby-throats. In spring and summer, I hardly even glance at those I see anywhere around here unless I'm trying to photograph them. Having a lot of experience does mean that I can take in a lot of details efficiently, but still, if there were an outlier hummingbird during the time when so many Ruby-throats were about, I could very easily overlook it, in the same way that if a Carolina Chickadee ever worked its way to Duluth, chances are I'd never notice unless it was a singing male.

I've seen one probable Rufous Hummingbird in northern Wisconsin on August 11, 2007. I only saw that one because the homeowner called me telling me there was a "weird" hummingbird with all the Ruby-throats at one of his window feeders. I didn't get confirming details to exclude the rarer possibility that it was an Allen's Hummingbird.

A handful of Allen's have appeared here and there in eastern states, but none have ever been identified in Minnesota—comparing their range map with that of the Rufous suggests why.

The Land of 10,000 Lakes has had our share of outlier hummingbirds over the years—Calliope, Costa's, Rivoli's, Anna's, and Mexican Violetears, along with the one that has appeared most often, the Rufous Hummingbird.

It’s important to know for sure who the one showing up on Peabody Street right now is, because the likelihood of survival as November proceeds is much more probable if this is a Rufous Hummingbird than any other species. Why? Rufous Hummingbirds breed the farthest distance from the equator of any hummingbirds. In spring, the main population migrates north along the Pacific slope, they breed in the Pacific Northwest and Alaska, and then work their way south along the Rocky Mountains before they get to the American Southwest and finally to their wintering grounds in southwestern Mexico.

Outlier Rufous Hummingbirds sometimes appear in the eastern states, especially during fall and winter. Most avian outliers end up dying without producing young, but individual Rufous Hummingbirds wintering in the United States are increasing in number, meaning these outliers must be passing their genes on to new generations. Normal Rufous Hummingbirds may now be at a disadvantage as extreme hot temperatures and droughts grow ever more common and as tropical deforestation damages their winter habitat, giving the outliers an evolutionary advantage.

It’s fairly intuitive that hummingbirds wintering in the Southeast can survive winters down there, but we’re also seeing individual Rufous Hummingbirds surviving entire winters in Ohio and Pennsylvania, even with subzero temperatures. Confirming the Peabody Street bird's identity helps us understand changes in Rufous Hummingbird migration patterns in recent decades, giving us a glimpse at the species' evolutionary biology in real time.

Rufous Hummingbirds are tiny, averaging a bit lighter in weight than the heaviest Ruby-throated Hummingbirds, tipping the tiny scales at 2–5 grams compared to the Ruby-throat's 2–6 grams. But they're not all that much smaller than the tiniest bird that regularly winters up here, the Golden-crowned Kinglet. Indeed, the weights of the two species overlap a bit, Rufous Hummingbirds averaging that 2–5 grams compared to the kinglets’ 4–8 grams. 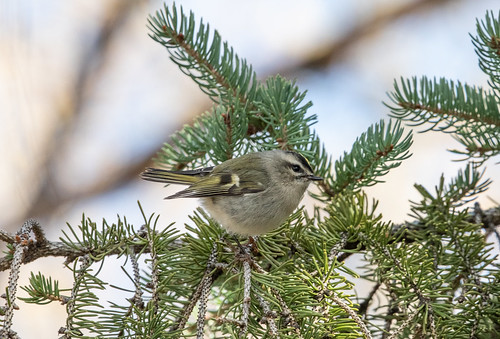 The very lightest Black-capped Chickadees weigh almost double what the heftiest Rufous Hummingbirds do—9 grams vs. 5 grams. Chickadees have been exploring the hummingbird feeder I set out on my office window tray feeder, and they look enormous compared to the tiny hummer. 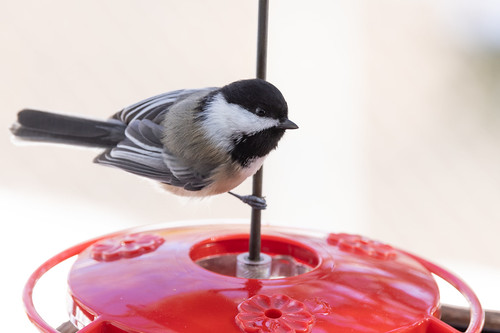 Allen’s Hummingbird is almost identical to Rufous, but one would assume Allen’s isn’t nearly as hardy—it breeds strictly along a narrow coastal strip of the Pacific Slope in California and Oregon and as a whole avoids mountains except in the Southwest and Mexico, wintering in Central Mexico. I'd think that in the exceptionally unlikely event that an Allen’s did find its way to Minnesota in November, its prognosis would be dire, except for the fact that an Allen's turned up in New Glarus, Wisconsin, sticking around in one yard from 26 November through 26 December just last year. That bird's identity was confirmed by a bird bander.
So how do we confirm that the bird in my yard is not an Allen’s? To tease this out, we first have to figure out how old and what sex it is. Its back is green without any of the rich rufous plumage of adult males of either species, except on the flanks. That excludes adult male of either species. It has quite a few dark feathers on the throat, especially concentrated in the center. Immature male hummingbirds often get these (though they often look more uniformly scattered, like that Selasphorus I photographed in Wisconsin), but older adult female Rufous and Allen’s do get throat markings, especially concentrated in the center. And those markings exclude young females. 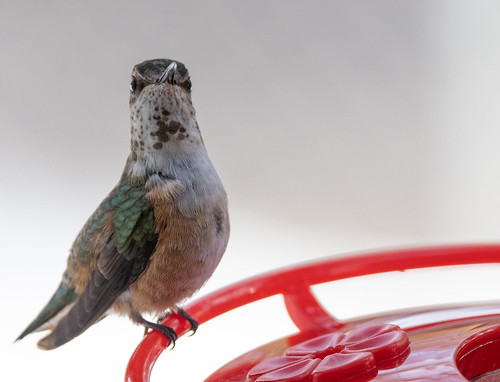 To figure out any more, a bird bander would take measurements—impossible if the bird isn’t in hand—and get a close look at the bill and the tail feathers.
Baby hummingbirds start out with what’s called a “corrugated” bill, as if the outer layer is full sized and a wee bit baggy until, as the beak grows, those vertical wrinkles smooth out. This is fairly easy to see in hand, especially if you're using a jeweler's loupe or other magnifying aid, which most hummingbird banders do, but seeing those corrugations is way trickier in the field. I’ve taken a bazillion photos of the hummingbird at my feeder, some very high resolution, and I can't see a single corrugation—the bill looks smooth and perfect in every one of my photos. Unfortunately, I’ve been mainly shooting at a fairly high ISO, so the photos are grainier than ideal, but nevertheless, my photos do support a higher probability that this is an adult female than a young male. 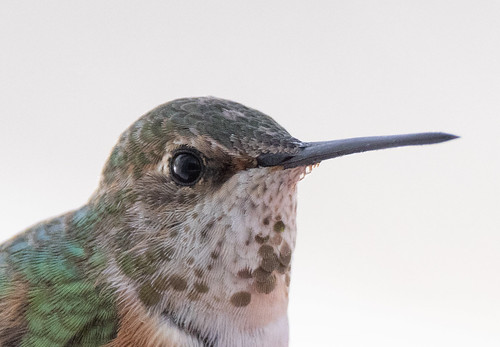 Now the shape of the tail feathers becomes the critical issue. In a hummingbird bander's experienced hands these are very easy to see, but it’s way, way trickier to get photos that clearly show them. The best we’ve managed so far with this bird are screen shots extracted from two slow-motion videos I took remotely. The best photos I’ve got are not in good focus but do show the shape of the critical r2 and r5 feathers—that is, the feather next to the central tail feather and the outermost tail feather. There's a notch on r2 that is clear enough to exclude Allen’s, and r5, the outer tail feather, appears wider than it should be on an Allen’s.
So with this much evidence supporting my bird being an adult female Rufous Hummingbird and no evidence supporting it being an Allen's Hummingbird, I'm satisfied. And now I'm hoping that she heads out.
I was hoping she'd leave today. It's very windy outside, though coming from the WSW it's at least tail winds. But hummingbirds migrate by day, usually taking off in mid-morning, and I'm still seeing mine as of 2:20 pm, so I expect she'll still be here tomorrow. The last time I had a lingering hummingbird, in 2004, she lit out about 10 am on December 3.  I don't want this one to stick around that late in the season, but even if she does, her being a Rufous means she has a pretty good a chance of survival, helping her species adapt to a new winter range. 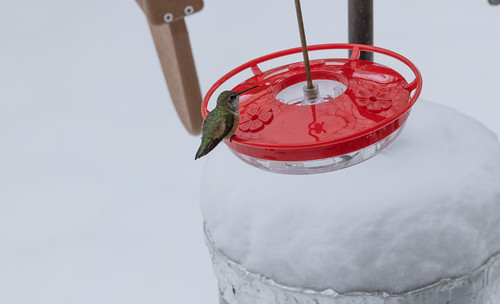