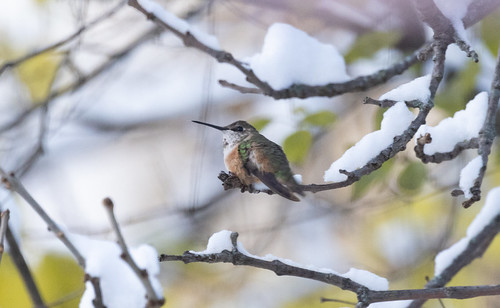 The Rufous Hummingbird who showed up in my neighborhood before Halloween was still visiting at least three people’s feeding stations this weekend, including mine. I’ve kept one of the locations a secret, but I did tell a few birding acquaintances that she was coming to my feeder and one of the other backyards, and I provided the same info for a small text message group of trusted birders.

Quite a few people showed up to see it the first couple of days after the word got out last week. I was mostly babysitting at my daughter’s house, but Russ was around and confirmed what I’d noticed in my own limited time here—everyone kept their distance and was extremely respectful of the bird’s needs.

I try my hardest to be an ethical birder, and work especially hard to protect the birds I’m personally responsible for—the ones visiting my own property. This Rufous Hummingbird seems shyer than the one who visited me back in November and December of 2004, but I did get some excellent video by setting up my camera on a tripod on the front porch and staying inside during its visits.

There’s a lot of foot traffic on my block and plenty of little children running about, but this is where she chooses to be right now. My 2004 bird encountered a lot more birders and didn’t appear to be visiting any other yards, but she stuck around day after day for 2 ½ weeks, surviving a blizzard and one night when the temperature plunged to single digits. Even when temperatures were as low as 20º F, I could watch her darting about in the upper branches of my big white spruces, fly-catching for tiny insects in and near the buds. She left at midmorning on a mild day—it was in the 20s—and seemed perfectly healthy after feeding heavily, so I know she had at least a chance of long-term survival.

People have voiced a wish that someone would trap her and bring her to a greenhouse or transfer her south or something. During a fierce blizzard on December 2, 2004, I couldn't help but leave a window to my home office open for that little rufous, and sure enough, she flew right inside. But she was simply curious, not seeking warmth. She flew to the center of the room near the ceiling, hovered in a tight circle studying the room, and then darted right back outside into the snow and wind. I wondered if she was thinking, "Well, she's no Martha Stewart." Whatever her reasons, she clearly chose to be outside on her own terms rather than in a snug human habitation.

My real-life personal experiences with that Rufous Hummingbird informed how I dealt with this year’s visitor, along with lots of emails and phone conversations with actual hummingbird experts during that previous visit, and information gleaned ever since, from scientists such as Scott Weidensaul who are researching the increasing numbers of Rufous Hummingbirds wintering in the eastern United States. Cold as it’s been here, with nighttime temperatures in the 20s, one banded Rufous Hummingbird near State College, Pennsylvania, survived air temperature lows of -9º F and wind chills of -36º F in January 2014.

But someone has been publicly lambasting me for telling birders about this hummingbird, and texted to the birding group, “How about leaving this stressed hummingbird alone so that it might survive?” When I mentioned Weidensaul’s work, this person claimed to be familiar with it but mansplained that “Seven degrees of latitude is significant.” 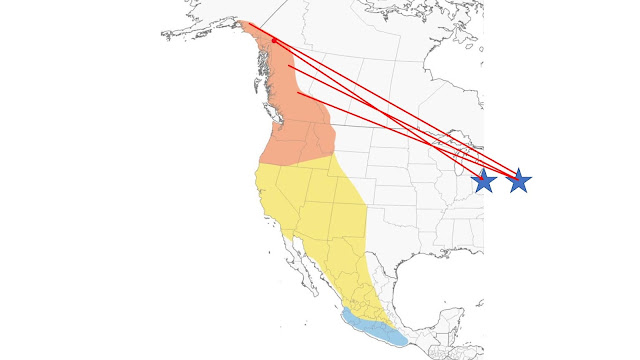 State College, Pennsylvania is at 40.7º N, and according to my GPS, my backyard is at 46.5º N. Of course that six degrees of latitude is significant. But the latitude of southern Alaska, where Rufous Hummingbirds breed, is 60º N. Unless our mansplainer subscribes to the “Beam me up, Scottie” theory of bird migration, he must realize that a hummingbird traveling from its breeding range in Alaska and the northern Rocky Mountains to anywhere south of here for the winter must cross 46.5º N at some point along the arduous journey. This year Peabody Street happened to be along this one's path. 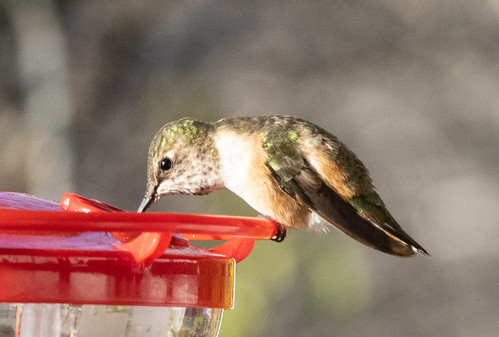 She spends much more time away from my feeders than at them, and doesn't appear any more often at the two other feeding stations. This is still autumn, but even in the dead of winter, Scott Weidensaul’s work has established that hummingbirds spend a lot of time catching insect food in addition to nectar. Indeed, two nice birders named Brandon and Trey who were at my house today (Sunday) told me that they'd watched this hummingbird hawking for insects at the top of a snow-covered spruce tree next to my house—the temperature was 30 degrees. 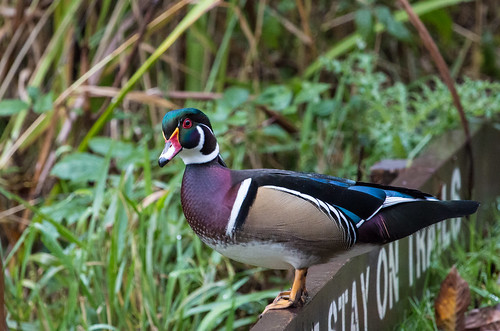 My critic is an avid duck hunter, in both the photographic and the shooting sense, so it seems a bit inconsistent for him to be so concerned about stressing out one perfectly healthy hummingbird who seems to be doing well in my neighborhood and is hardly being held here against her will. She's in the middle of her migration, as are the ducks he aims for during Minnesota's waterfowl season. The most abundant duck in America, the Mallard, has a population less than half that of Rufous Hummingbirds—an estimated 9.4 million Mallards compared to 22 million Rufous Hummingbirds. Wood Ducks, numbering roughly 3.5 million, are barely a sixth as numerous as Rufous Hummingbirds. And two other ducks popular with hunters, Canvasbacks and Redheads, each number less than 1 million—significantly less than 5 percent of the Rufous Hummingbird population. I’m not saying these numbers measure the relative value of an individual bird’s life, nor am I implying that licensed duck hunting isn’t a legitimate sport—indeed, I purchase at least one Federal Duck Stamp every year. But people respectfully enjoying seeing and photographing a hummingbird in November are causing a lot less stress to her as an individual than people shooting at ducks are to those individuals, not even counting the individual ducks that are outright killed. 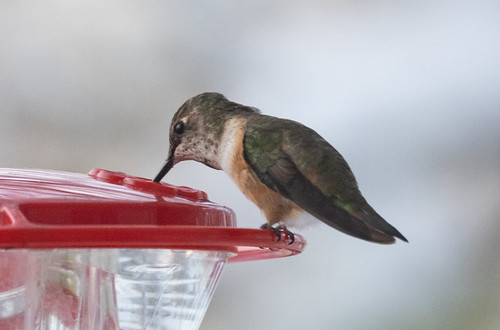 I’m not used to having to defend my ethics and, in this case, I’ve been working especially hard to accommodate the needs of the hummingbird in both providing food and limiting birding pressure on her. But public criticism cuts deep, especially when it involves a bird I’m so emotionally invested in.

Most of the local birders have seen her now, so only a handful birders showed up on Saturday and so far on Sunday. I swapped out the 30-degree sugar water for very warm sugar water before dawn after Saturday night’s snowfall, and sure enough, she was back at my feeder at first light today. After drinking her fill, she perched for several seconds on a snow-covered branch before heading off once again. I got photos through the window of her at the feeder and on that branch. I don’t know how long she’s going to remain on Peabody Street—her fate is in her capable wings, not my clumsy hands. She will certainly move on sooner or later, and as far as I’m concerned, the sooner the better. But as long as she keeps visiting my yard, I’ll keep the home fires burning and the sugar water fresh.